Let's take it outside 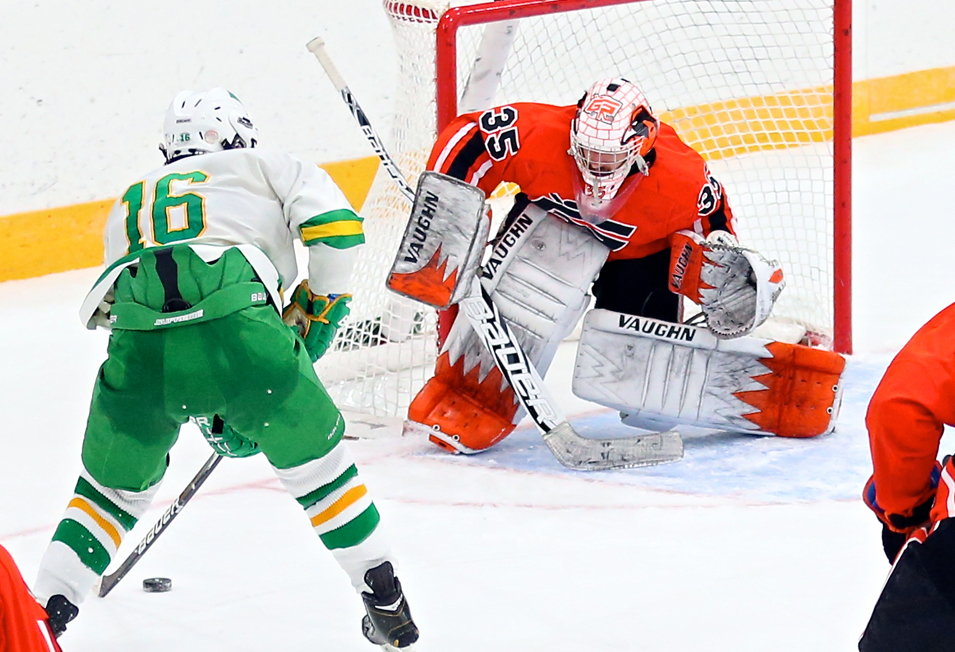 Hunter Shepard will be tested in goal for Grand Rapids by a strong Benilde-St. Margaret's offensive attack at the 7th annual Hockey Day Minnesota. Photo by Brian Nelson.

It’s almost time for the annual Hockey Day Minnesota festival, which will always garner top billing on the Hub’s games of the week. Nothing quite brings out the hockey lover – and kid at heart – than games played under the winter sky.

This year, Pokegama Lake and Grand Rapids play host to the high school portion of the celebration of hockey. On Saturday, Jan. 19, No. 5AA Eagan (10-3-1) takes on No. 14A Hibbing/Chisholm (8-7-1) in the 10 a.m. start, followed by No. 3AA Benilde-St. Margaret’s (10-4-0) and host No. 13AA Grand Rapids (9-4-2) at 1 p.m. The rink is nestled against the shoreline of the lake, directly below the rolling hills of the Pokegama Golf Course. It’s cupped by a heavily treed shoreline with wildly forested islands dotting the distant backdrop.

And after a few years of decidedly non-Minnesota winter weather, it also looks like the forecast is holding for a frigid day of outdoor hockey. Temperatures in the teens with a party cloudy sky – and maybe even some snowflakes – should make for great ice.  But watch out for a brisk northwest wind that could gust up to 22 miles per hour.

That’s a distinct contrast from the last few years. Last January, the event had to be moved off of Lake Minnetonka because of unseasonably warm weather, two years ago in Moorhead the teams played through slush and three years back in Hermantown, it rained. Global warming, indeed. 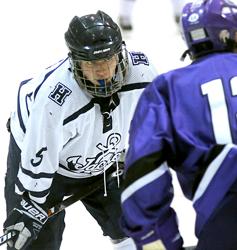 Hibbing/Chisholm's Derek Abrahamson (5) readies for a face off. Photo by Tim Kolehmainen.

The opener features a non-traditional match between a huge Twin Cities suburban public school (Eagan) and a traditional Iron Range power (Hibbing/Chisholm). The two programs don’t have much history against each other, nor much in the way of common opponents. Both have played Minnetonka early in the season and lost (the Bluejackets lost 6-1 on Nov. 30 and the Wildcats lost 5-3 on Dec. 4).

Eagan just had its 10-game unbeaten streak snapped with a 4-2 upset loss to rival Eastview last Saturday. The Wildcats and coach Mike Taylor have recovered nicely from the graduation of a huge senior class that led the program to back-to-back state tournaments.

Hibbing/Chisholm is also surging at the right time, winning seven of its last nine after an uncharacteristic 2-5-0 start under coach Mark DeCenzo. Minnesota-Duluth recruit Adam Johnson (14-9-23) leads the Bluejackets’ offense, which is just beginning to get on track. Johnson is a whirling dervish on the ice and complements the sharpshooting of Josh Bestul (8-8-16). 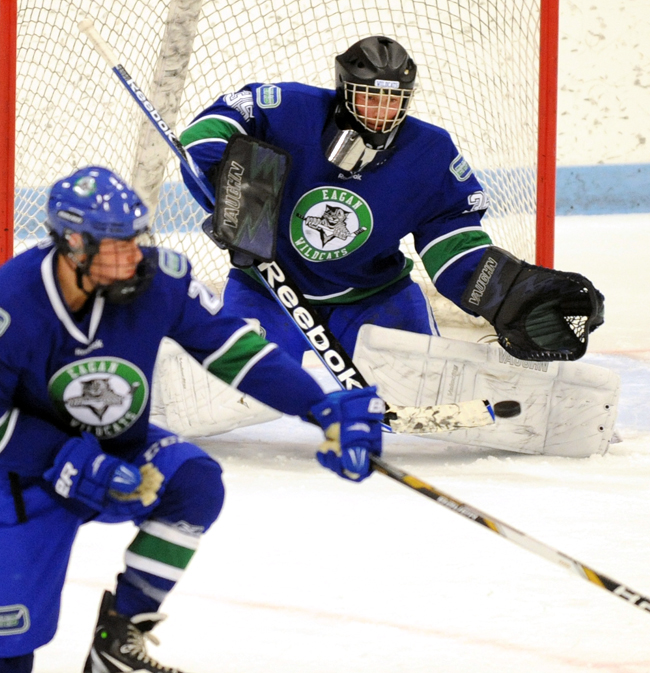 Andrew Lindgren has taken over full-time duties in goal for Eagan this winter. Photo by Loren Nelson. 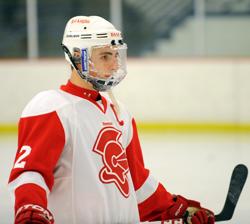 Grant Besse (12) is the pilot of the high-flying Benilde-St. Margaret's offense. Photo by Katherine Matthews.

The second game features the defending Class 2A champions – and Twin Cities private school – (Benilde-St. Margaret’s) against another Iron Range power (Grand Rapids), which is hosting the event. They’ve each won twice against common opponents, beating Duluth Marshall and Elk River in mid- to late-December. But while the end results were the same, the scores lend themselves to an easy interpretation of both clubs’ strengths and weaknesses.

Benilde-St. Margaret’s simply outscored both by a combined 11-4 margin, something the Red Knights have been able to do much of the season. With Mr. Hockey favorite Grant Besse (25-12-37) and linemates Dan Labosky (7-29-36) and T.J. Moore (7-15-22) leading the way, coach Ken Pauly’s club has serious offensive firepower. But when things haven’t gone well, they’ve also broken down in their own zone and allowed too many goals against.

On the other hand, Grand Rapids posted a 5-2 combined score against the two common opponents, winning with defense, goaltending and timely scoring -- largely from junior power forward Avery Peterson (15-16-31), who scored three of those five goals. He’s had a knack for scoring big goals in big games, but the Thunderhawks don’t have much scoring power past their front line. Coach Bruce LaRoque does have a great defensive corps led by University of Minnesota recruit Jake Bischoff (3-3-6), David Horsmann (1-8-9) and Curtis Simonson (1-5-6) as well as strong goaltending from junior Hunter Shepard (9-4-2, 2.01, .927).

It should be a strength on strength battle. 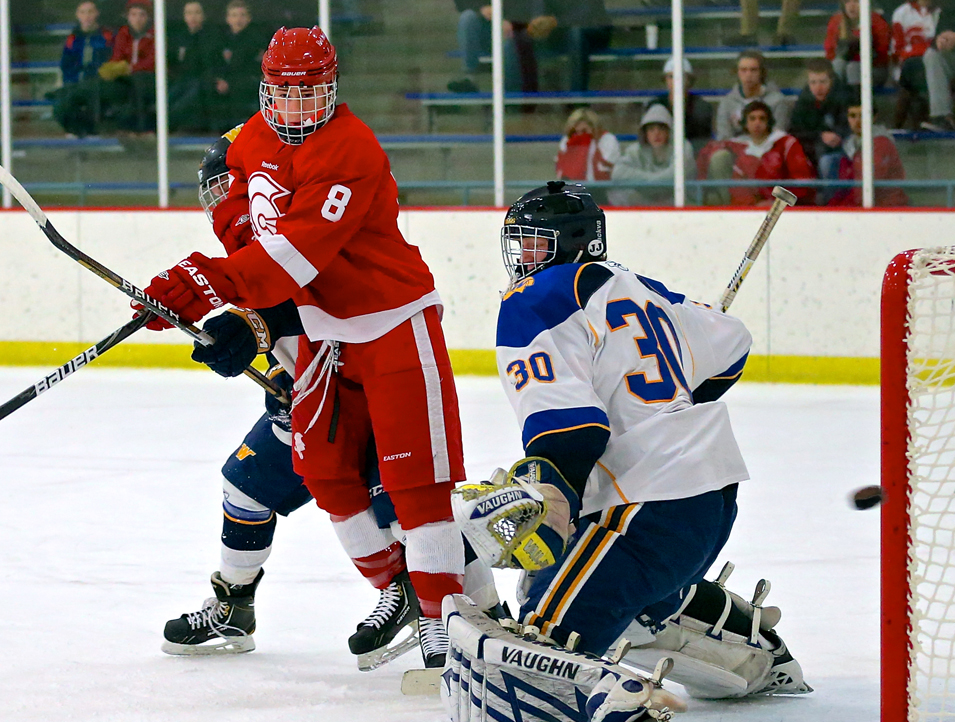 Game(s) of the Week

Two of the state's most consistent winners over the past seven years get together for a midseason showdown that could determine state tournament seeding (should they both reach the X, of course). Breck and St. Thomas Academy have combined for six of the last seven Class 1A state titles and both look like strong contenders for another crown. Top-ranked St. Thomas Academy (12-1-1) just might be the best team in the state regardless of class, having already beaten defending Class 2A champion Benilde-St. Margaret's and former top-ranked teams Hill-Murray and Edina. The Cadets also beat third-ranked Breck (10-2-1) 2-1 back on Dec. 27 in the Schwan Cup Gold semifinals, outshooting the Mustangs 33-18. But Breck has also been rolling since that game, going 5-0-1 with wins over Moorhead, Totino-Grace and Rochester Lourdes.

One of the premier games in the Lake Conference every year is this battle between sixth-ranked Minnetonka and No. 2 Edina -- one of the many premier games the best conference in high school hockey has to offer. Injuries have taken their toll on the Hornets (12-3-0) over the past few weeks, as they're just 3-3-0 in their last six games and have scored just 11 goals. Connor Hurley (10-14-24) continues to lead the way, but certainly misses linemate Dylan Malmquist (8-10-18), who is out with an injury. But Minnetonka (9-4-1) hasn't exactly been lighting up the scoreboard over that same stretch, going 2-4-1 in its last seven games with 18 total goals. Can Max Coatta (12-19-31) and Connor Thie (7-12-19) continue to carry the offensive load along with the Skippers' defensemen?

It's been more than a decade since anyone besides these two northwestern powers represented Section 8A at the state tournament. Warroad (12-2-1) dominated much of that time before giving way the last two years to Thief River Falls (8-6-0), which also won the section in 2006. Both teams are again contenders to reach the X, but they have some company in unbeaten East Grand Forks. This is a big section seeding game -- and a chance to keep pace with the Green Wave. The Warriors are unbeaten in their last eight games (7-0-1) since falling 5-3 at East Grand Forks in mid-December. Youth has led the charge in the form of Kobe Roth (14-9-23) and Jared Bethune (16-13-29), the team's two leading scorers. The Prowlers have won six straight since a slow start and have yet to face the Green Wave. As always, tough defense (2.21 GAA) has paced Thief River Falls under coach Tim Bergland. Logan Engelstad (14-3-17) has been regularly lighting the lamp, as well.

Who can forget that infamous Section 6A quarterfinal game of a few years ago when ninth-seeded St. Cloud Apollo knocked off top-seeded Little Falls? Certainly not the two programs involved, which should make for a great game this week. But unlike that upset, the turf is much more even this time around. No. 11 Little Falls (11-3-0) is again strong, with Michael Stumpf (10-3-0, 1.62, .938) putting up ridiculous numbers in goal and a strong Flyers' defense supporting him. But Apollo (9-6-0) has one of its best teams in years with a potent first line that could put up points on anyone. The trio of Jared Christen (28-22-50), Paul Kenney (16-26-42) and Jason Omann (12-24-36) will certainly test the Flyers' defense. Both teams are angling for the top seed in the Section 6A playoffs, as well.

Section 7AA looks to be wide open this year, as the top teams have both underwhelmed at times -- and looked like world-beaters at times. The same holds true for these two contenders, Cloquet/Esko/Carlton (10-4-1) and No. 13 Grand Rapids (9-4-2). Nothing was decided the first time they played, a 2-2 tie back on Jan. 3 in Cloquet, a game in which the Lumberjacks held a 42-28 shot advantage but needed a Westin Michaud goal with 1:30 remaining to earn the tie. Michaud (21-23-44) leads the 'Jacks in scoring along with linemates Beau Michaud (16-22-38) and Karson Kuhlman (16-13-29), an important trio that does much of the team's scoring. Grand Rapids has also been top-heavy in the scoring department, with Avery Peterson (15-16-31), Cody Mann (10-8-18) and Reid Holum (6-9-15) the only players with more than three goals.

Speaking of games that can't be forgotten, it's a dead certainly that neither Maple Grove nor Blaine will forget what happened in the Section 6AA final last winter -- a 15-1 thumping of the Bengals by the Crimson, the biggest blowout in a section final in state history. The ninth-ranked Bengals (9-4-1) saw their six-year run at state end in spectacular fashion but have rebounded quite well behind a strong junior class anchored by Tyler Cline (11-13-24), Brandon Notermann (11-10-21), Joey Lau (5-12-17) and company. The juniors account for the top eight scoring spots on the Bengals, all of them in double-digits. Maple Grove (9-7-0) got off to a slow start as coach Gary Stefano had to replace a huge senior class that led it to its first state tournament. But the Crimson have won six straight, including nice wins over Andover and Bloomington Jefferson.

Another big game from the southern half of Section 7AA, as Northwest Suburban Conference mates Andover and Elk River square off this week. The pair faced each other way back on Dec. 8, a 4-1 Elks victory that featured four goal scorers: Andrew Zerban (7-8-15), Jacob Jaremko (9-10-19), Chase Springman (12-7-19) and Tim Sanford (8-7-15) -- not surprisingly four of the team's five top scorers. The No. 14 Elks (9-7-0) have also received a big season from goaltender MacLean Berglove (8-7-0, 2.33, .899), who has stepped in admirably after the graduation of longtime 'tender Anders Franke. The 20th-ranked Huskies (5-8-1) were supposed to be a big contender in the section after reaching the final last winter but instead have struggled to string together victories. Andover is winless in its last five games (0-4-1) and has scored just six goals in that span -- a problem all season.

Just a few years ago, these two programs were part of a Class 1A co-operative that operated in near-anonymity on the western edge of the Twin Cities sprawl. After splitting up, they've remained rivals in the Wright County Conference, but while Waconia has remained in 1A, Holy Family Catholic has vaulted itself up into Class 2A and begun to make some noise statewide. The Fire (8-3-0) have played a light schedule of just 11 games thus far, which sets up a big second half of the season for the high-scoring machine led by sophomores Shane Gersich (7-16-23) and John Peterson (11-12-23) and senior Garrett Riebling (10-8-18). Waconia (6-8-0) would like nothing better than to beat its former partner. Tanner Riebel (16-9-25) has been scoring goals in bunches for the Wildcats, netting at least one in nine of the last 12 games.

Other than a blip on the radar two years ago, this crosstown rivalry between Armstrong and Cooper has been all in favor of the Falcons. Cooper's victory in January of 2011 was the first since 1995 for the Hawks. Sophomore goalies Keegan Husom and Angel Hillstrom -- yes, a girl playing varsity hockey -- have been seeing plenty of shots and Cooper (3-12-0) has been allowing plenty of goals (7.00 per game). Yet Armstrong (2-10-1) hasn't been able to consistently put the puck in the net so far this year, scoring more than three goals just once since a season-opening 9-2 victory at Legacy Christian. Cooper's Trey Rooney (10-16-26) is the only player on either roster with double-digit goals. But this rivalry game usually brings out the best in both teams.