Apple Valley has been hit by departures and injuries but the team hopes to regroup. 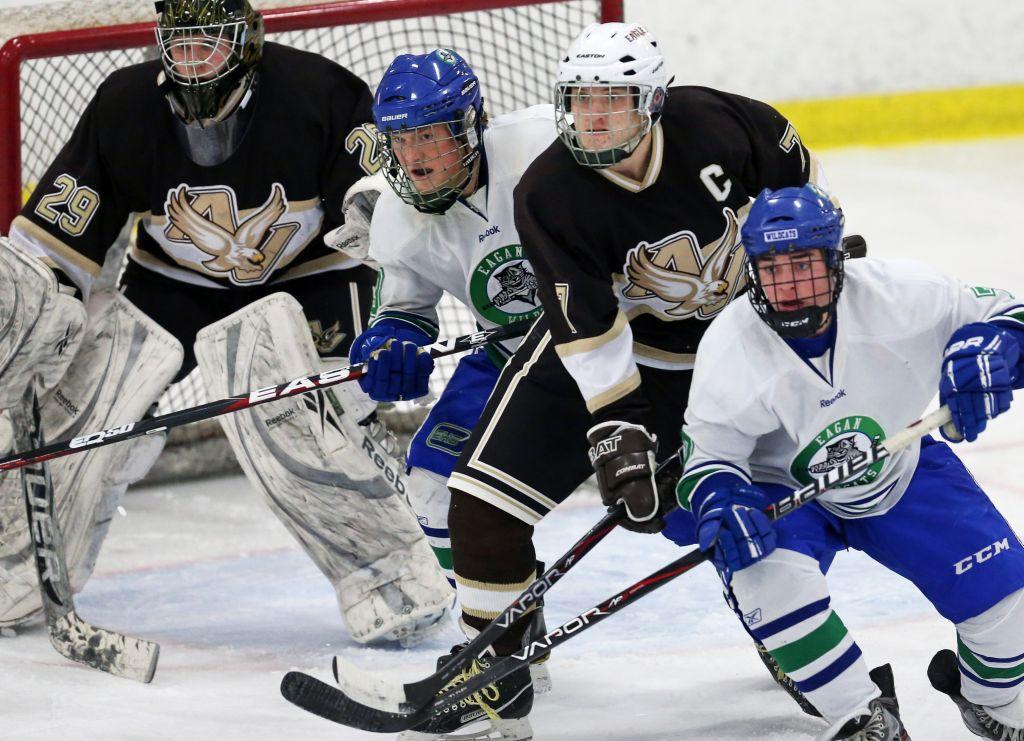 Apple Valley boys' hockey coach Jerry Hayes hasn't seen a season like this on in the 20 years since he took the job.

"It's been a weird year," Hayes said. "[The coaches] thought we were going to write a book about this year. A running joke with us is that we should have written the book. Some of the things that happened to us, between injuries and other factors -- I've never experienced these things in 20 years as a head coach."

A combination of injuries, departures and a large 2012 graduating class has delivered a trying time for the historically successful program. The Eagles have reached the state tournament five times since 1981, including its most recent berth only three years ago. It has produced NHL and NCAA Division I players along with a Mr. Hockey award winner, David Fischer, in 2006.

Through Tuesday, the Eagles sat at 3-12 overall and 1-8 in the South Suburban Conference. Only 24 players are on the roster this season, but Hayes still hasn't been able to dress all of them in one night. For a few games, the Eagles were without all of their top four defensemen. Knees, concussions, shoulders and a torn ACL coupled with illnesses and a couple of league violations have left the team hamstrung.

It's forced the cancellation of some junior varsity games. On most nights, all but five or six boys are playing JV periods, just so they can keep the games scheduled and keep everybody involved.

"It's difficult," said senior captain Mason Preston, who threw out his shoulder against Rosemount on Jan. 12. "But we never come into a game going through the motions. We're always fired up, ready to play and ready to compete."

One of the reasons the overall numbers are down: The team graduated 14 letter winners last year.

A more unpredictable reason: Eight players who would be juniors or seniors this season have left the program, Hayes said. In a period of two months, four players left the program this past spring, a troublesome trend that the long-time coach has seen throughout the state. Players have left for junior hockey, outside development programs or other schools, he added.

"We're proud of the guys that stayed, but it's tougher and tougher for the smaller associations like ours to keep kids," Hayes said. "But I'm not feeling sorry for ourselves. We're no different than 30 to 40 other metro programs that are in our situation."

But the Eagles do have a group of stalwarts keeping this team afloat. Preston and Christian Smith are the team's leading scorers and lone returning letter winners. Jacob Smith and Logan Kohorst are playing defense for the first time to help the team fill positions. Tyler Heuer is another player from whom Hayes is asking a lot.

"Those five guys have really been the core of what we're trying to do," Hayes said.

Preston has been around to see the ups and now the downs, but he maintains his loyalty to the only colors he's ever known.

"Overall, the mood's pretty good,'' he said. "There are a lot of young guys excited to play high school hockey. Hopefully we can pass on that tradition and pride in the program."

Apple Valley claimed solid victories over cross-town rival Eastview, Park of Cottage Grove and Farmington. Once the team is healthy, both Hayes and Preston believe it will be much better than its record would indicate.

Hayes said, "I think we can get healthy and surprise some people and really play a lot better than what some of our scores reflect."