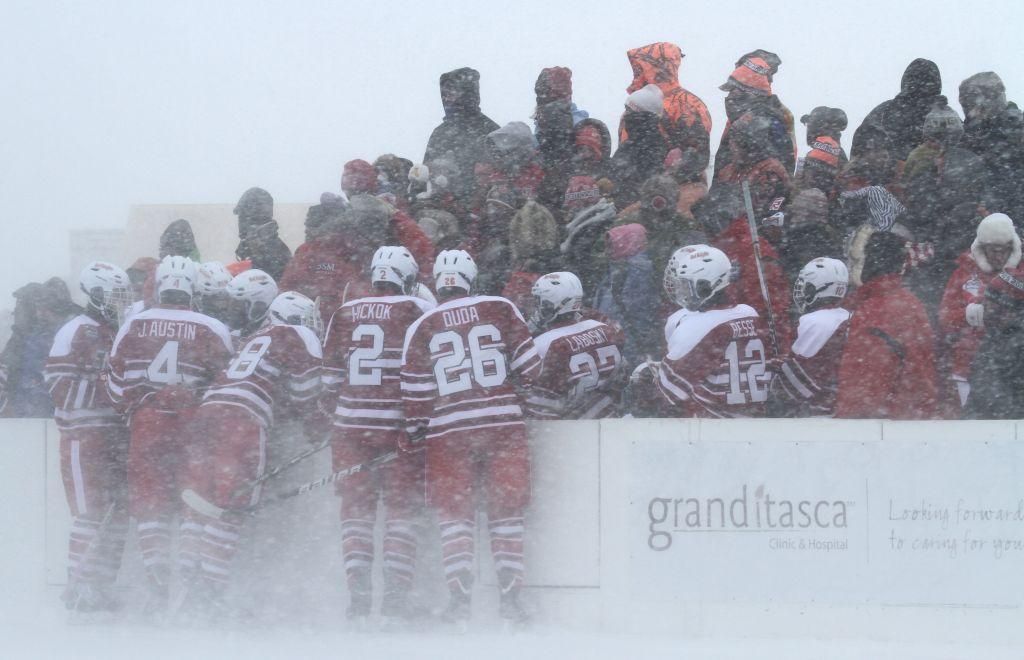 Benilde-St. Margaret's players huddled against the wind during a time-out on Hockey Day Minnesota on the shores of Lake Pokegama in Grand Rapids. (Photo by Bruce Bisping, Star Tribune)

"Back in the day, the same group of guys would be out on the elementary school rinks grinding it out and having a blast," Mann said. "It was the same out here."

Trailing by two goals after the first period to defending Class 2A state champion Benilde-St. Margaret's, the Thunderhawks rallied for a 3-2 overtime victory. Mann said his game-winning goal repaid local fans for their warmth on a frigid afternoon.

"I can't say enough about our fans," Mann said. "They are definitely the heart and soul and the fire of this hockey team. These fans make it a home-ice advantage. If they weren't as good as they were, this would be just another game outside."

Televised to a statewide audience, Saturday's game brought attention to Grand Rapids hearkening back to the 1970s. Officially nicknamed the Indians in those days, Grand Rapids became "The Halloween Machine" by donning its orange-and-black colors and winning state tournament championships in 1975, 1976 and 1980.

Times have changed. Grand Rapids is the last Iron Range team competing among the state's largest schools by enrollment. But the area still churns out quality players. Grand Rapids reached the Class 2A state tournament championship game in 2006 and 2007, and senior defenseman Jake Bischoff, a future Gopher, ranks among the state's best.

Bischoff participated in Saturday's ceremonial pregame puck drop. Doing the honors was Bill Baker, who won a state title with Grand Rapids in 1975, national championships with the University of Minnesota in 1976 and 1979 and an Olympic gold medal in 1980.

"It seems there is still a lot of pride being from Grand Rapids, and that's very encouraging," Baker said. "These are good people. I don't think it'll ever go back to the way it was, but it seems like they've got things going pretty well here."

Welcome messages to participating teams, whether scrolling across an electronic sign outside a bank or affixed to a sign outside a gas station, spoke to the community's passion for the hockey spotlight.

'Saliva would freeze up'

A ruthless wind blew out of the northwest, creating white-out conditions on the lake and challenging play on the ice. Eagan routed Hibbing-Chisholm 9-2 in Saturday's first game. The Wildcats played with the wind in the first period, but defenseman Tommy Muck said, "Every time you skated into the wind, it felt like you weren't going anywhere."

Said Benilde-St. Margaret's forward Spencer Naas, who scored his team's first goal: "At times your saliva would freeze up and you felt like you couldn't breathe."

Players gutted out the conditions. Win or lose, none of them said he would trade the experience. Eagan forward Zach Glienke, who netted a hat trick, said the added pageantry "reminded me a lot of the state tournament. Add in the wind, and you've got Hockey Day Minnesota."