Share
On Tuesday, January 13, the Mound-Westonka Boy’s Hockey team hosted the Holy Family Fire, and the White Hawks exploded for a 10-1 win. The White Hawks started the scoring spree halfway through the first period on a power play goal, when Riley Horgan took control of the puck in the corner, and fed it to his brother Kirby coming around behind the net. Kirby fed it to defenseman Tanner Botts coming in to the near slot, and he fired a low hard shot for a 1-0 White Hawk lead. Later in the period, the White Hawks added 2 goals just 20 seconds apart, the first on another power play when Riley Horgan won a face-off in the Fire end and pushed the puck back to the blue line to Tanner Botts, who moved to an open spot and fired a high, hard wrist shot to make it 2-0. Kirby Horgan brought the puck all the way up the ice, and threw a pass to his brother Riley breaking in, and Riley put the point-blank shot past the goalie for a 3-0 lead. The White Hawks added 2 more goals in the final minute of the period, the first when Kirby Horgan was tied up with 2 defensemen in the corner, and Nick Kuehl picked up the puck. Kuehl circled the net, looking to stuff it in, but instead spotted Riley Horgan sneaking in front, and a quick pass by Kuehl and a quick shot by Horgan made it 4-0. Then with just 17 seconds left in the period, Riley Williams picked up a loose puck in the Holy Family end, avoided 3 Fire players trying to stop him, and made a nice move to pull the goalie out and slide the puck in, giving the White Hawks a 5-0 lead after one.
In the second period, the White Hawks continued their attack as soon as the period started, with Riley Horgan taking a shot on an early power play in the first minute of the period, and Kirby Horgan stuffing in the rebound. Five minutes later, Riley Horgan brought the puck up the middle of the ice, squeezed between 2 defensemen, and slid the puck over to Ben Curti in front. Curti looked to shoot, but instead slid the puck over to Kirby Horgan who was open on the far edge of the net, and Kirby tapped it in. Halfway through the second period, the Fire took two penalties, and the White Hawks enjoyed a 5-on 3 advantage. They made it 8-0 when Josh Bingham took the puck in the corner and fed Nick Kuehl moving into the high slot, and Kuehl fired a wrist shot high into the net. 7 seconds later, while still on a 5-on-4 power play, the White Hawks made it 9-0 when Tanner Botts brought the puck up the side and slid it in front of the net to Derek Swanson, who slid it under the goalie’s pads.
The Fire broke on to the scoreboard with a goal late in the second period, but the White Hawks answered with a final goal in the third, when Derek Swanson’s hard shot in front was saved and the puck was pushed back to Broc Couser at the point, and his shot found the back of the net for a final 10-1 White Hawk win.
On Friday, January 16, the White Hawks hosted their neighboring rival, the Orono Spartans, in what always proves to be an exciting match-up. Orono jumped out to an early 1-0 lead 4 minutes into the first period, when a Spartan forward slapped in a rebound puck that was loose in front of the net.   But then the White Hawks took control of the play for the rest of the period, building a 2-1 lead after one. Their first goal came on a White Hawk power play when Nick Kuehl, in the Mound defensive zone, hit Riley Horgan with a perfect pass crossing the Spartan blue line, and Horgan held the puck until the goalie came out, then pulled it back and slipped it around him. The White Hawks took the lead at 2-1 when Riley Horgan, Kirby Horgan, and Josh Bingham were working the puck behind the Spartan net, and Kirby Horgan took it from the corner along the goal-line and hit the upper corner over the goalie’s shoulder with a nice wrist shot.

The White Hawks extended their lead to 3-1 early in the second period, when Riley Horgan picked up the puck in the Mound defensive zone, went all the way up the side of the ice, leaned in on the defenseman, and slid the puck under the goalie’s pads. Early in the third period, the White Hawks expanded their lead to 4-1 when Riley Horgan tried to take the puck to the net and was met by 2 Spartan defensemen. The puck came over to Colby Kratch, and he spun around and slid a shot on the ice that caught the far corner of the net. But the Spartans came back to cut the lead to 4-2 just a minute later on a pretty slapshot from the point, and closed to within one at 4-3 with 6 minutes left in the game on a well-executed 2 on 1 breakaway. Orono continued their pressure until the very end of the game, but the White Hawks were able to hold on and claim a hard-fought 4-3 win. In net for the White Hawks, Dan Swanson stopped 31 of 34 Spartan shots for the victory. 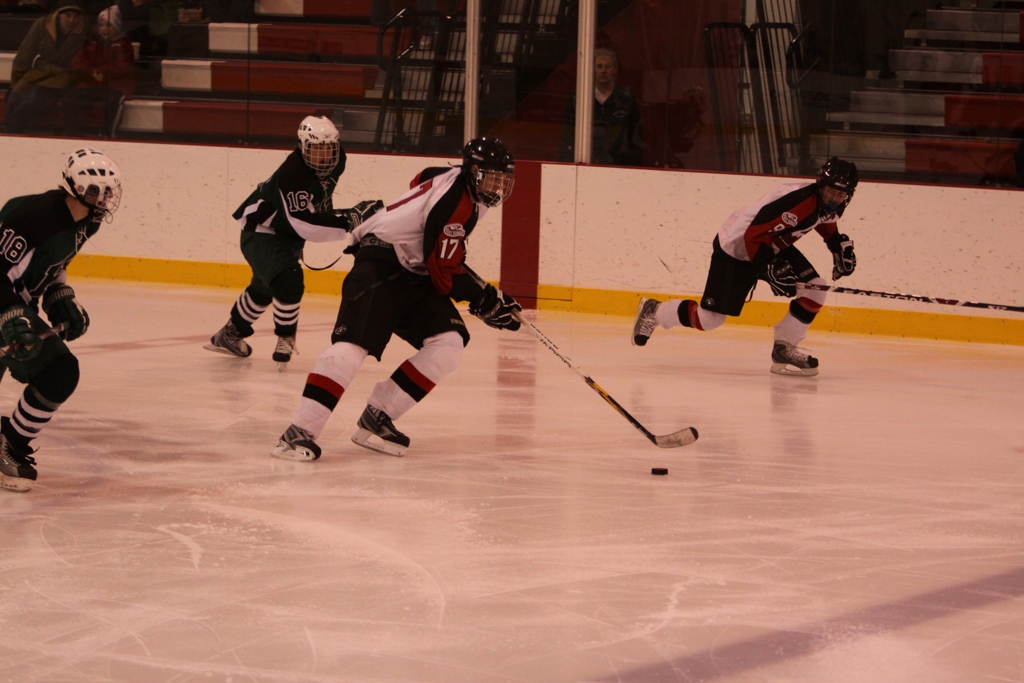