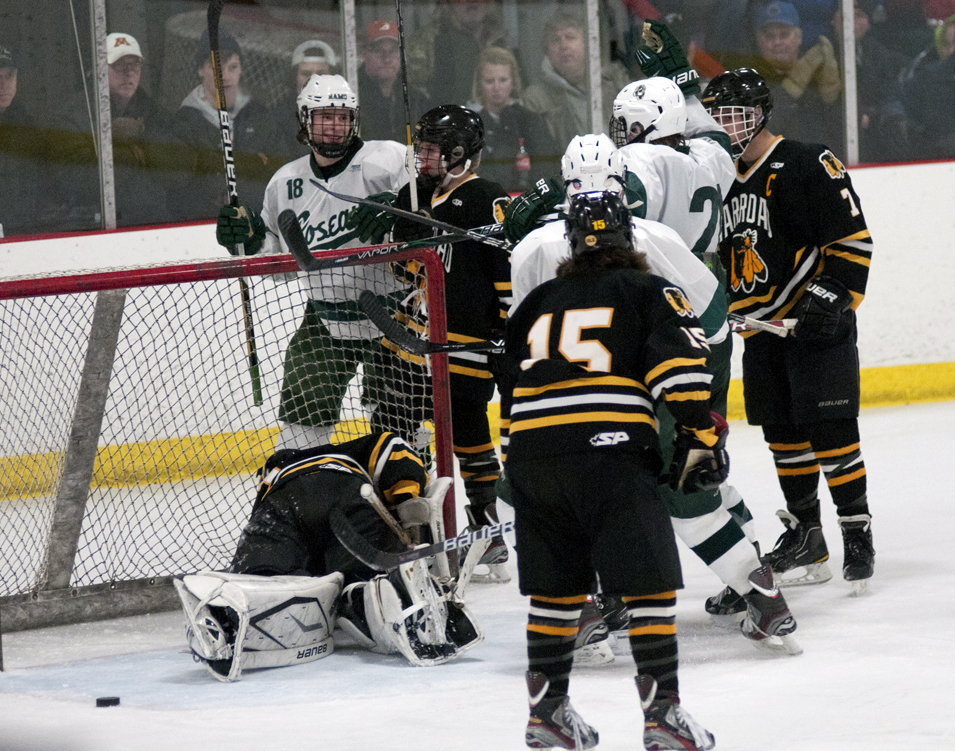 After being shut out in three of its previous five games heading into Tuesday night’s home game against Warroad, Roseau’s scoring drought was entering Dust Bowl-era futility. For a team expected to put up big goal totals this winter, it wasn’t supposed to be this difficult to score.

Lundbohm had a simple message for his team in practice leading up to “The Game.”

And shoot some more.

With that, the rain of goals came thundering down. Roseau (12-7-1) scored four times against the Warriors – twice on the power play – and shut out its fiercest rival 4-0 at the Roseau Memorial Arena.

Other than an outburst at St. Cloud Tech 10 days ago, it was the most goals the Rams had scored in almost four weeks.

“It will boost our confidence for sure,” said senior defenseman Tanner Okeson. “That’s what we were going to focus on this game was to shoot the puck more.”

It worked. Junior Zach Yon opened the scoring on a bad-angle power play shot with 6:36 to play in the first period. Alex Halstensgard made it 2-0 midway through the second period with a slapshot from in front of the players’ bench. Yon scored again in tight quarters on the power play to make it 3-0. And Cole Bjugson ripped a slapper from the point to make it 4-0 with 8:43 to play.

The Rams also got back to basics on its biggest strength, the man advantage. The state’s highest-ranked power play is really the engine that drives Roseau. Through 20 games, the Rams’ special teams has 28 power play goals and is clicking at a 42.4 percent clip.

Yon brings plenty of the speed. He scored twice with a man advantage against Warroad and leads the team with eight power goals and 25 goals in total. Junior Alex Strand brings the playmaking ability. Defensemen such as Okeson and Bjugson bring size and offensive ability. All seem to have an uncanny ability to find each other given the space and time.

“We move the puck so well together,” agreed Yon. “We’ve been playing all the way up since youth hockey, so we know where each other is all the time.”

“It definitely gives us a huge advantage,” said Okeson of the power play. “All we try to do is move the puck quick and get it to the net as fast as we can. It’s been helping us out a lot, winning games – a lot of close games.”

Tuesday’s game wasn’t close, but it was a key victory for the Rams. The atmosphere in the locker room was a little more jubilant. The sticks felt a little lighter. The smiles came a bit easier.

“This is huge,” grinned Okeson. “I’ve been waiting for this game my whole life. My senior year home game against Warroad. The last time I’ll ever play them.

Yon concurred. “We’re going to get rolling now, I can feel it.” 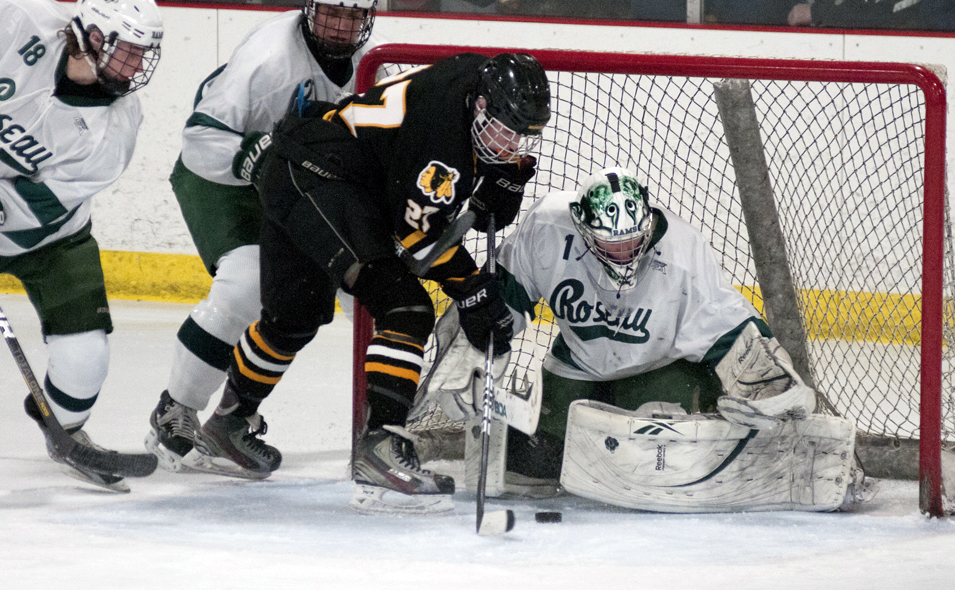 Ryan Anderson stopped all 23 shots in goal for Roseau, including this one against Warroad's Brandon Newhouse (27).

Zach Yon scored a pair of power play goals to lead Roseau to a 4-0 shutout over fierce rival Warroad at the Roseau Memorial Arena Tuesday night, Jan. 29. The victory avenged an earlier loss to the Warriors in Warroad and evened the season series at a game apiece.

The state's most potent power play continued to hum for Roseau (12-7-1), which came into the game scoring at better than a 40 percent clip with the man advantage. They were better than that against the Warriors (15-6-1), scoring twice on three chances. Yon opened the scoring with 6:36 to play in the first, then scored again on the power play with 3:58 to go in the second.

Cole Bjugson and Alex Halstensgard also scored for Roseau, which also broke a scoring drought. The Rams had been shut out in three of their previous five games.

Ryan Anderson stopped all 23 shots he faced for the victory in goal, while Justin King had 24 saves.

1. Zach Yon, Roseau
Yon scored a pair of power-play goals as the Rams went 2-for-3 with the man advantage, continuing a season-long trend. Yon showed both a great shot and excellent speed all game long and was tough for the Warroad defense to contain. The son of former Gopher Bill Yon has added size and strength to his frame this winter, as well, leading to a team-high 25 goals.

2. Cole Bjugson, Roseau
Speaking of speed, Bjugson also has terrific wheels and he uses them to rush the puck from his defensive position. Bjugson scored the final Roseau goal in the third period, but was also a key member of the Rams' defense that pitched a shutout against Warroad.

3. Ryan Anderson, Roseau
Anderson faced 23 shots and stopped them all in goal. Although he was only tested with a handful of tough shots, he did come up big. He got a pad on Kobe Roth's spin-o-rama shot while the game was still in doubt and later stuffed the Warriors' Brandon Newhouse on several in-tight chances. 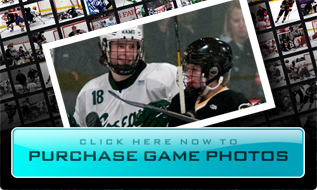