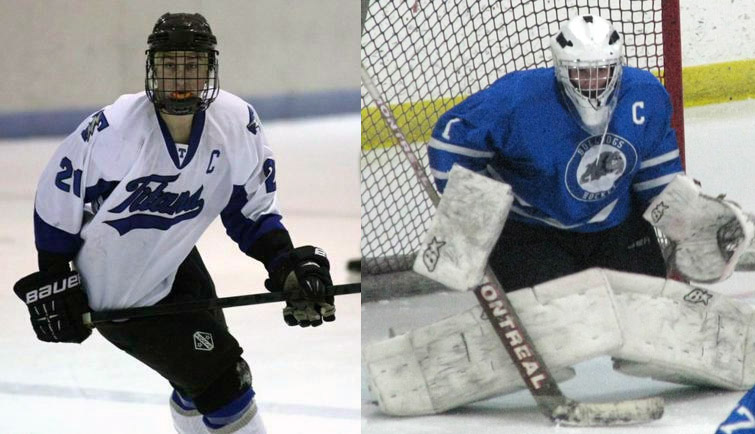 Jackson is a rocket-powered forward from a large Twin Cities suburban school. The high-scoring senior is widely considered a likely Mr. Hockey finalist and has verbally committed to play Division I hockey at Michigan Tech. With his speed and great instincts, Jackson lights up the scoreboard regularly.

Amsden is a crease-filling goaltender from a southern co-operative of small schools. He also has his eyes set on a college hockey future, but is still angling for an offer. With his huge 6-foot-3 frame and great positioning, Amsden regularly makes it tough for opponents to light up the scoreboard.

But there is one similarity that makes Jackson and Amsden stand out among their peers.

Both chose to return to hockey programs not known as traditional state powers for their senior seasons, rather than pursue an early path to juniors. Yet even in that choice, their paths diverged before coming back to high school hockey.

Gone but no forgotten

In a way, Le Sueur-Henderson/St. Peter/Tri-City United coach Shawn Carlson can thank a former college, Olympic and NHL star for the return to high school of Amsden, his imposing goaltender.

“Last year at our end-of-season banquet, we watched a film with Neal Broten being interviewed,” recalled Amsden a night after he backstopped Carlson’s Bulldogs with 52 saves but suffered a 1-0 defeat to Hutchinson in overtime. “He said with all of the accomplishments he had during his career, high school hockey in Roseau was his favorite.

“That really speaks volumes about Minnesota high school hockey and the impact it has on people, not only during their career but the rest of their lives.”

As he was living with a host family in Little Falls and playing for the NA3HL’s Minnesota Flying Aces last fall, Broten’s words still echoed in Amsden’s mind. Yet Amsden had made his choice, forgoing his senior year with the Bulldogs to pursue junior hockey. It wasn’t an easy decision to leave his classmates and friends, according to his father, Jim Amsden. 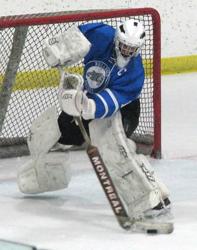 “Going into it, we always tried to support Chris and what we wants to achieve in his goals,” said Jim Amsden, who recalled his son yearning to play college hockey since he was in Squirts. “He had this opportunity and we talked about it. We asked him if he was sure he wanted to make the sacrifices that went with it.”

The sacrifices were huge. Amsden had played varsity hockey since eighth grade and was the undisputed backbone of the program. He had left his family, his friends and his longtime position in the Bulldogs’ goal. Amsden was a big reason the Bulldogs set a school record with 20 victories last winter.

“He’s grown up in this hockey program and he’s always been the guy that everyone leaned on,” said Carlson. “I don’t know if he knew how valuable he was to everyone until he left.”

Nor did Amsden know how valuable the high school experience would be to him. Once school started, Amsden began to feel the pull of his roots. Friends texted him telling him how much they wanted him back, Carlson said.

“(The decision) weighed on him a little bit,” Jim Amsden said. “We put it in perspective, though. We asked him long term what was most important to him. He still has two years he could play juniors, but this is his only senior year.”

“I liked it up there, it was fun and the guys were great. But the big thing was that I didn’t really think missing my senior year would be as big of a deal to me,” Chris said. “It was kind of hard being away from everyone. I’ve always been a big supporter of local athletics, so it was hard not being there for my friends. Not going to homecoming games and that sort of stuff was tough. I wanted to have those memories.”

In early November, about two weeks before the high school hockey season began, he returned home.

“I’d been playing in the program down here in St. Peter for my entire life, so I figured I owed it to the program and my teammates to stick it out,” Amsden said. “I really enjoy it down here and wanted to play with my friends for the one last time.”

“I still have two years of junior eligibility. I figured I’d make the most of it while I can because looking back, that’s what everyone says they enjoy the most.”

Amsden first let his coach know he was returning, but wanted him to keep it a secret until he could tell all his teammates. As word trickled in, Carlson began to get phone calls. He took each with a knowing smile.

“To say that everyone was excited would be an understatement,” Carlson said. “The amount of calls and text messages that I got was really cool to see how excited everyone was. It really changed the expectations for our team. It ended a lot of questions.”

After a slow start, Amsden has been as stingy as ever in goal. The Bulldogs lost 14 seniors from last year’s record-setting team, but are still 7-10-1 heading into February. Amsden has a .920 save percentage with a 2.42 goals against average and four shutouts. In his last eight games, Amsden has allowed just 10 goals while facing a ton of shots.

“It is preparing him to play a role at the next level,” said Carlson. “If a junior or college hockey team needs to lean on him, he’s had that experience before and he knows how it works. He’s up for the challenge every night.”

Jake Jackson is in a hurry on the ice, but not off it. He’s enjoying his high school years too much to fast track his hockey career.

Known for his blazing speed, Jackson can make opposing defensemen look silly – and often does – with his quick decisions and certainty with the puck. He’s confident and sure of himself, and those traits transfer both on and off the ice.

“He has his goals and he knows what it’s going to take,” Tartan co-coach Steve Romanchuk said. “He’s well-grounded and very mature for his age.”

It’s those same traits that brought Jackson back to Tartan for his senior season, despite numerous offers to leave early for juniors. Jackson is reticent to talk about where he could have gone or whom he confided in before deciding.

To outside observers, Jackson’s return to Tartan has always been a certainty.

“I don’t know how many people knew about (my options),” Jackson said. “I tried to keep it my own opinion. I didn’t want anyone trying to change my decision.” 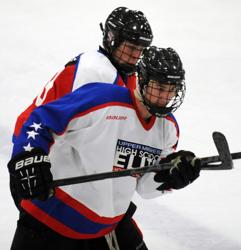 That includes Michigan Tech, where Jackson committed to play earlier this winter. Huskies’ head coach Mel Pearson and his assistants realized they had a special player – and one confident in his path. To Tech’s credit, the coaching staff was good with Jackson’s decision.

“When I made my decision, I knew that was what I was doing,” Jackson said. “I talked to the coaches and I told them right away that I was staying. The people I talked to respected that decision. Everyone has supported me and told me to follow my dreams.”

Romanchuk speaks for everyone involved when he says that Jackson’s development will not be hurt by playing his senior season at Tartan. The Classic Suburban Conference schedule has some difficult games and Jackson is a marked man most nights, meaning he knows what it’s like to carry a team.

“All the scouts and colleges know about him and what he can do,” said Romanchuk of his two-year captain. “It doesn’t hurt him to score 50-55 points and become a more confident and accomplished player.”

Where would the Titans be without Jackson? Romanchuk doesn’t want to think about it, particularly not while Jackson is leading the team in scoring with 42 points (22 goals, 20 assists) and has Tartan a surprising 17-3-1 overall heading into February. The Titans have beaten all comers except Hill-Murray (twice) and St. Thomas Academy.

Jackson actually spent a week with Waterloo (USHL) before the season to get in a few games. He played well and according to Romanchuk, the Black Hawks did everything in their power to get him to stay – to no avail.

“He’s a pretty smart kid and he chose his path,” said Romanchuk. “He realized that skating here with this team this year meant that he’d be skating with his buddies. That was very important to him.”