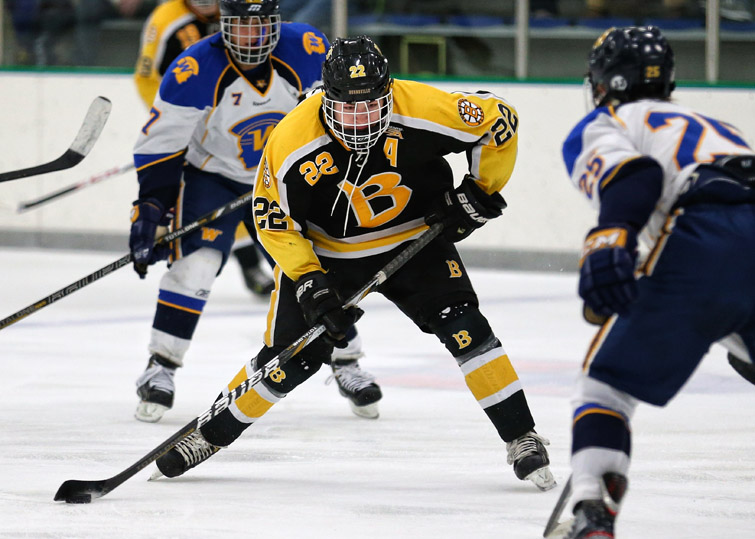 Lots of top-level high school players talk in vague terms about “connecting” with a college coaching staff after they commit to play at the Division I level.

That connection could mean a preference for the systems those coaches run, an instant compatibility in personality types or just some indescribable feel-good vibe.

“Definitely there is a deeper connection knowing your future head coach is from the same city you are,” Sheehy said about Osiecki, a former Burnsville defenseman. “Knowing he is a legend here.

“He won a state championship.”

With the stay-at-home Osiecki blocking shots and banging bodies, the Braves (their nickname has since been changed to Blaze) won state titles in 1985 and ’86.

Osiecki, whose father Tom was the head coach for Burnsville during those title runs, went on to win a national championship at the University of Wisconsin in 1990 and played in 93 NHL games. He is in his third season coaching the Buckeyes, who will be part of the new Big 10 men’s hockey conference next season.

“I met him a while ago, he was one of my first recruiters,” Sheehy said about Osiecki. “He always said high school hockey was his best experience of all the hockey he played.”

Sheehy scored 19 goals and 25 assists last season, and he was a standout in the Upper Midwest High School Elite Hockey League this fall.

He said he visited Wisconsin and Minnesota and also had received some interest from Michigan Tech and Denver. Sheehy and his parents recently visited Ohio State, and the trip went so well he felt ready to make his decision. He announced he had committed to Ohio State on his Twitter account on Thursday, Jan. 31.

“I was in no rush to get it done,” Sheehy said. “I just felt once I got there that everything was just perfect about it. It feels good to not just have it done but to know I picked the right school.”

“He can score goals, and he has been scoring goals at every level he has played."