One the job with Minnehaha Academy assistant coach Tyler Howells 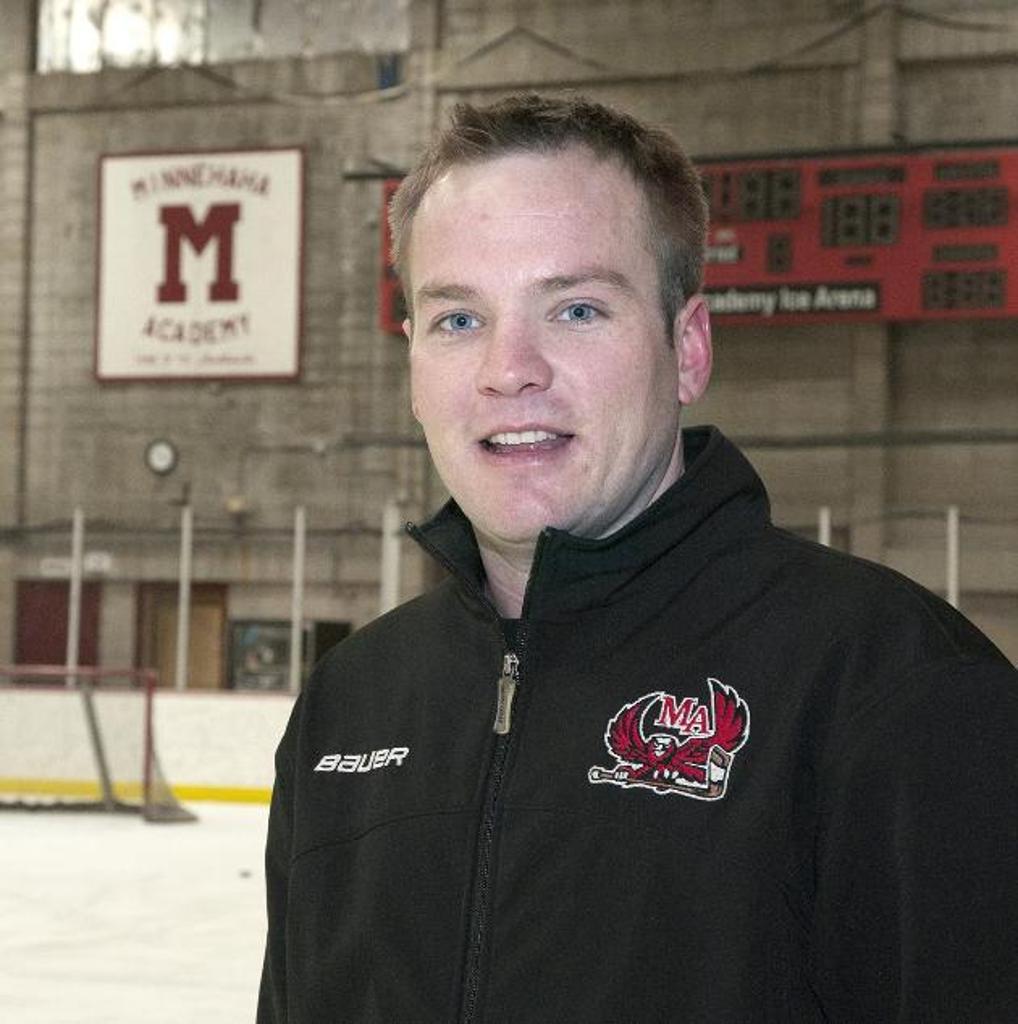 Tyler Howells started skating at age two, pushing a chair around the ice on Lake Minnetonka. He went on to play in the Minnesota high school tournament with the Academy of Holy Angels, then he went to Michigan State University on a hockey scholarship and made it to the national tournament.

After college, Howells played professional hockey in Europe for two years, in Germany and Northern Ireland.

“We were the only team in Northern Ireland, ” he said. “The rest of the teams were in Scotland, Wales and England. We had to travel across the sea almost every weekend. The Belfast fans took to hockey — it’s like rugby. We had 5,000 fans at every game.”

Still, Howells decided to cut his professional career short. “You look at people who play hockey for a living — then in their mid-30s they have to start a work career. I decided to come back and start my life in Minneapolis and join the workforce, ” he said.

His first employer in the staffing industry “looked at my background in hockey, my willingness to move, to work in different cultures. They saw that as a plus in networking, making client calls. I was actually able to find that job pretty easily, ” Howells said. He now works as a recruiter for Cargill. “My major was food industry management in the College of Agriculture at Michigan State. Now I’m at Cargill, an ag company. It kind of worked out, ” he said.

When he moved back to Minnesota, he took a year off hockey. “Sometimes when you’re playing professionally, that’s your living and you can get sick of it. But I realized I really missed it. I started out helping out with Triple A teams in the area.”

A friend, Pat Griswold, got the head coaching job at Minnehaha Academy, and asked Howells to join him as an assistant coach. “He runs the team and has the final say on things. I focus on the defensemen,” Howells said.

Howells said it helps that “Cargill is big on work/life balance. I work from 7 to 4 instead of 8 to 5, so I can go to practice during the day. Cargill has been willing to work with me on it.”

Q: Can any good player be a good coach?
A: It’s a totally different monster. If you are a good player, you go out there and do. As a coach you have to be able to communicate to others, in a way that gives them an ability to make decisions. I find coaching to be a lot harder than actually playing. You have to work with different individuals — do it this way with one, that way with another.

Q: Does coaching skill transfer to the corporate work place?
A: Coaching and teaching, working with many different personalities, adds to success in the workplace. Being able to motivate people and keep that competitive spirit helps as well, especially in what I do — talent recruiting. We’re throwing our brand out against other large companies. We want to strive to be the best and make others think Cargill is the best. That’s a key part of our position.

Q: Would you like to be a head coach someday?
A: Down the road I wouldn’t mind getting into a head coach role, but I like the assistant coach role. As I’m starting my work career, I can focus more on work. As my career is established, who knows what will happen?