Raiders rally to knock off Bears 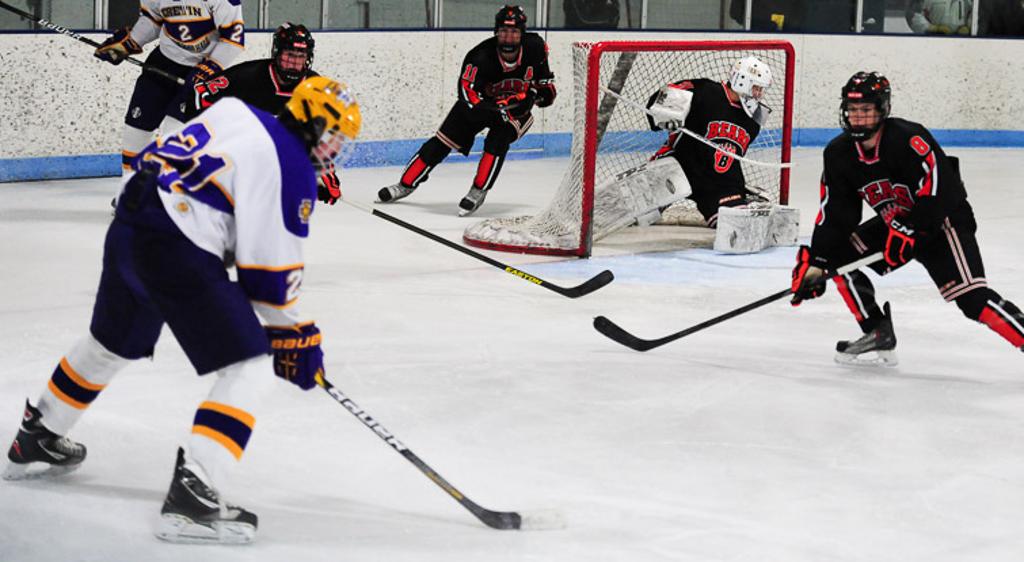 Cretin-Derham Hall's Levi Bailey (21) puts a shot on goal that goes in for his first of the season to give the Raiders a 5-3 win against White Bear Lake. Photo by Adam Crane

Cretin-Derham Hall forward Levi Bailey chases back to his own net to help with the defense in the Raiders 5-3 win against the Bears. Photo by Adam Crane

Throughout a season every player is bound to go through a slump.

There might be stretches where one will be the hot hand to go to while other times they might be as cold as the ice they play on.

Cretin-Derham Hall senior Levi Bailey hasn't had a scoring slump at all in his varsity career.

That is because he has never scored a varsity goal before.

Bailey tallied his first career goal on the power play in the third period of the Raiders 5-3 win against White Bear Lake on Thursday, Feb. 7 at Highland Arena in St. Paul.

Not only was Bailey's goal the game-winner, it also stretched the lead for Cretin-Derham Hall in the Suburban East Conference standings.

"It was really nice to see Levi get a goal," Raiders' coach Jim O'Neil said. "He is a very popular guy in the locker room and I know a lot of guys have been pulling for him to get one and you can't get many bigger than what he did tonight."

Prior to notching his first goal, Bailey has gotten quite a bit of friendly grief from his teammates.

All of it is in fun nature and Bailey has taken it in stride.

Cretin-Derham Hall senior Patrick Cullen (22) has a scoring chance on Bears' goalie Chase Gorman (31). Cullen scored a goal for the Raiders in their 5-3 win against White Bear Lake. Photo by Adam Crane

"I have heard them all," Bailey said. "There have been a lot of jokes, but it is fine and I know it is just for fun."

"We tell people that he has a shoulder injury and that he can't raise his arms to celebrate," senior defenseman Derek Olmschenk said. "That is what we tell them why he hasn't scored yet this season."

Despite the fact Bailey did not have a goal this season and only four assists he was on the power play.

Bailey got the puck along the boards from behind the net and when he saw Bears goalie Chase Gorman tangled in the net, he immediately threw the puck on net.

Gorman was not able to recover in time and shortly after had to fish out Bailey's first goal as a member of Cretin-Derham Hall.

"I am not sure what happened, but it looked like he (Gorman) was really deep in the net," Bears coach Tim Sager said. "I would have to talk to him (Gorman) about it, but sometimes if you just throw the puck on net you never know what will happen."

Bailey had a better vantage point to see Gorman's weakness.

"He was caught in the net," he said. "As soon as I saw that I had to put it on net and sure enough it went in. It felt pretty good to finally get one."

The reaction on the Raiders' bench had many reasons to celebrate.

On top of it being Bailey's first goal, it gave Cretin-Derham Hall its first lead.

Prior to the Raiders had to fight its way back from two, two-goal defects and Bears junior forward Jake Wahlin had a few reasons for being such a pest for Cretin-Derham Hall.

Three to be exact.

Wahlin found the back of the net three times for a hat trick against the Raiders, but it was not enough to propel the Bears to victory and climb closer to the Suburban East leaders

Just 51 seconds into the first Wahlin scored his first goal on a power play and his second with 37 seconds left in the opening period. He was score again in the second period just 17 after Patrick Cullen got the Raiders on the board.

"It was a big goal for us," O'Neil said. "We adjusted and put Derek Olmschenk on Wahlin to slow him down a bit and when we got that goal from Levi, you could just tell how excited the guys were for him and our team."

White Bear Lake defeated the Raiders in overtime back on Dec. 15.

Since they are 13-2-0 in conference play and has a five point lead in the standings.

"We needed those two points tonight, because White Bear Lake is right there," Bailey said. "We felt like they stole one from us back at their place and it was great to finally score."

White Bear Lake's Tommy Giller (23) controls the puck behind the Raiders net. The Bears jumped out to a 2-0 lead, but Cretin-Derham Hall stormed back to win 5-3. Photo by Adam Crane

Jake Wahlin scored three goals, but it was not enough for White Bear Lake as it lost to Suburban East Conference foe, Cretin-Derham Hall 5-3 on Thursday, Feb. 7 at Highland Arena in St. Paul.

Wahlin scored two critical goals in the first period for the Bears.

His first came on the power play just 51 seconds into the first period to give White Bear Lake a 1-0 lead.

He struck again with only 37 seconds left in the first period and the Bears had a 2-0 lead and momentum heading into the second period.

Cretin-Derham Hall got on the board when Patrick Cullen beat Bears' goalie Chase Gorman.

Before the Raiders could finish celebrating Wahlin completed the hat trick when he knocked in a loose puck that was sitting in the crease and extended the lead to 3-1.

Jim Buckingham pulled the Raiders within one when he fired a wrist shot in the upper right corner and 61 second later Max Jackson tied the score when his shot off of a rebound found the back of the net.

Levi Bailey scored his first goal of the season for the Raiders not he power play in the third period and his score proved to be the game-winner.

Buckingham scored an empty net goal with 17 seconds left in the third period on a shot from the Raiders end of the rink to give Cretin-Derham Hall some breathing room.

It will be on the road again on Tuesday, Feb. 12 for a conference matchup with Stillwater at the St. Croix Recreation Center.

Cretin-Derham Hall improves to 15-7-1 and more importantly 13-3-0 in the Suburban East. It will host Roseville on Saturday, Feb. 9 at Highland Arena.

1. Jake Wahlin, White Bear Lake
Even in defeat Wahlin is the easy choice for the top star. He scored three goals for hat rick and scored timely goals for the Bears. His first goal came 51 seconds in the first and his secon came with only 37 seconds left in the opening period. He completed the hat trick when he answered the bell from Cretin-Derham Hall, knocking in a loose puck just 17 seconds after the Raiders scored their first goal.

2. Jim Buckingham, Cretin-Derham Hall
Buckingham scored two goals for the Raiders on two impressive shots. His first was a wrist shot off the faceoff in the upper right corner and he added a little icing to the cake when he scored on a shot from his own net with Bears goalie Chase Gorman was pulled for the extra attacker.

3. Levi Bailey, Cretin-Derham Hall
Bailey picked a great time to score his first career varsity goal. It proved to be the game-winner in a key conference game for the Raiders, who sit at the top of the standings. 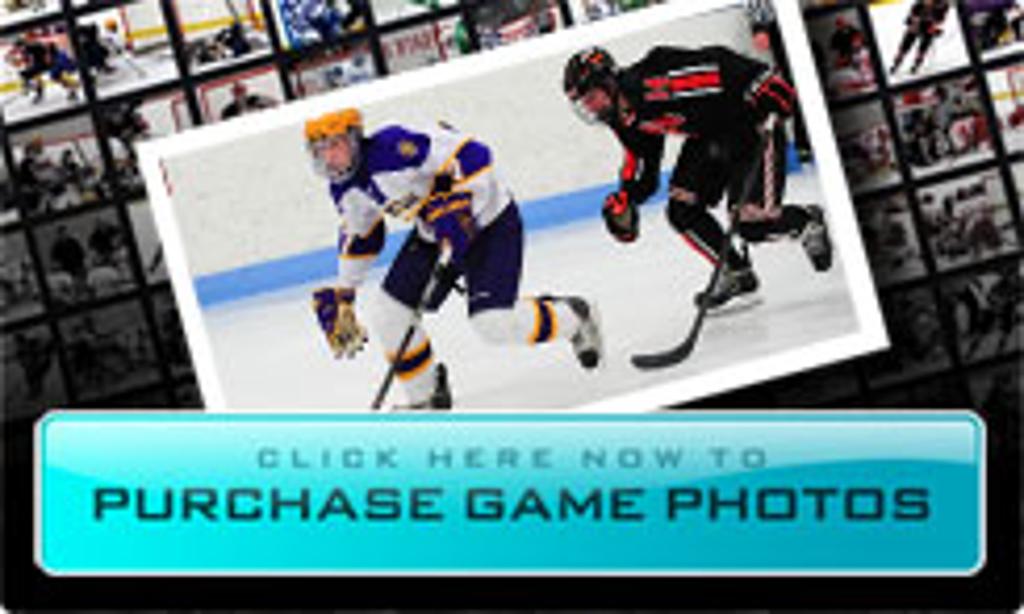