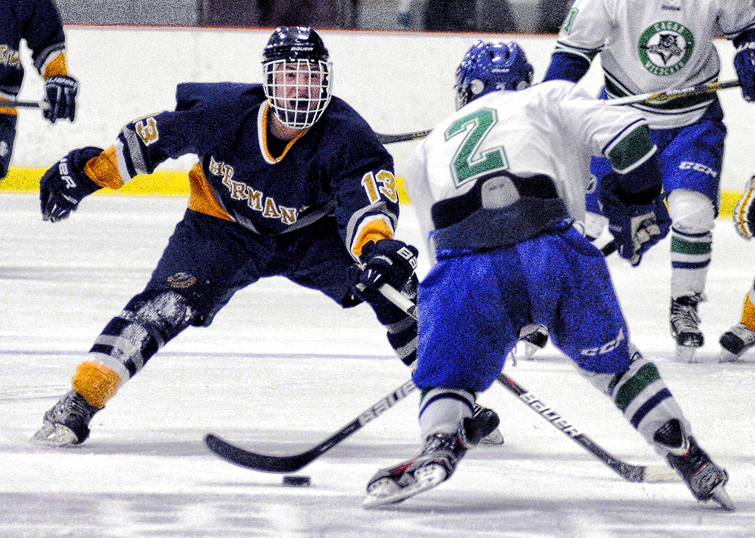 Hermantown's Zach Kramer reaches out for a poke check in the South St. Paul Premier Tournament's championship game against Eagan. The Hawks are once again the top seed in the Section 5A playoffs. Photo by Tim Kolehmainen.

At this time last year, Hermantown had a perfect record and a roster full of senior talent. The Hawks ran their record to 30-0-0 before ending up with the Class 1A second-place hardware for the third straight year.

The 2012-13 Hawks don’t have as many seniors, but they have done what has become customary in Hermantown in recent seasons -- they reloaded.

With another crop of skill and scoring loaded in its lineup, the self-proclaimed three-time defending public school state champions find themselves sitting atop the Section 5A bracket once again.

Defensively, the Hawks are commanded by two of the best blue line generals around in Jake Zeleznikar (11-28—39) and University of Minnesota-Duluth recruit Neal Pionk (14-15—29). Add to the mix Ryan Carlson (5-10—15) and you have a group of defenders that will not only shut teams down and but also put the puck in the net. 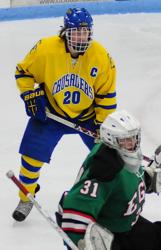 No. 2-seeded St. Cloud Cathedral (18-7-0) handed Hermantown one of its four losses this season, and the Crusaders are hoping they can add another loss to the Hawks’ résumé in the section tournament. 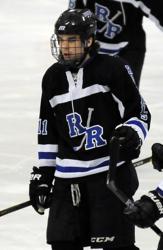 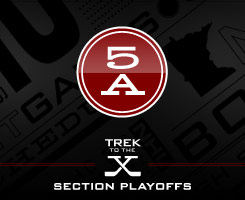 Hermantown is currently riding a nine-game winning streak, suggesting the Hawks are peaking at the right time. With the scoring depth and the rock solid top duo at the blue line, Hermantown should be the favorite to advance to another state tournament. The Hawks will be motivated, too, as they lost to St. Cloud Cathedral in overtime earlier in the season.

The Tigers showed throughout the year they could skate with and beat anyone, and they are hoping the confidence gained in those triumphs will be a benefit to them during the section playoffs. Princeton would like to avenge a 5-1 loss to St. Cloud Cathedral on Feb. 5 and just might get that chance in the section semifinals.