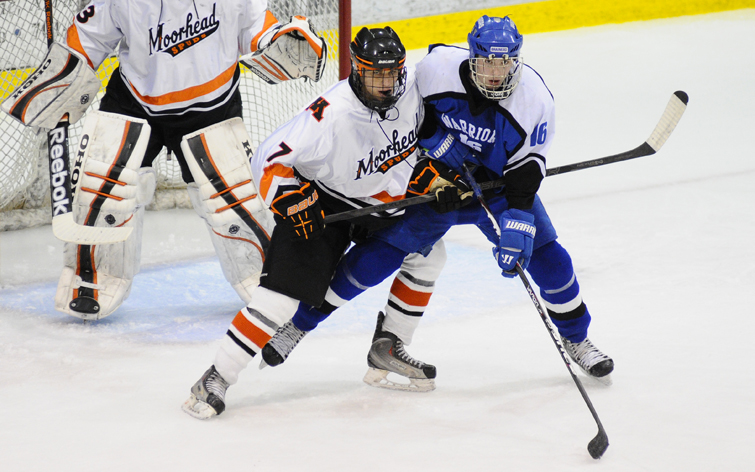 Moorhead's Ryan Bruggeman (7) and Brainerd's Cole Smith (16) battle for position in the slot. The Spuds and Warriors earned the top two seeds in the upcoming Section 8AA playoffs. Photos by Tim Kolehmainen. 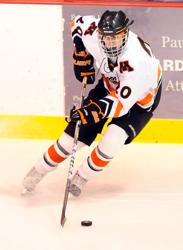 It hasn’t been an easy transition for Moorhead.

The Spuds entered the year with as much uncertainty as they’ve had in years. Oh, sure, there was some stability up front with the return of several key forwards. But in their own zone – and behind the bench – the Spuds were looking at plenty of new faces. Gone were two longtime figures in the program, coach Dave Morinville and All-State goaltender Michael Bitzer. It was an open question as to how the Spuds would adjust.

And yet, when the section seeding was announced Feb. 13, there atop the heap in its familiar spot as No. 1 seed was Moorhead (11-10-2). The two-time defending champions remain a tough out, despite a few hiccups along the way under new coach Pete Cullen.

Moorhead is young in its own zone, as a trio of underclassmen have solidified the defensive play. Sophomore defensemen Will Borgen (3-16-19) and Alex Mehnert (2-8-10) have risen to prominent roles, while sophomore goaltender Jacob Dittmer (8-5-2, 2.67, .907) has emerged for a battle for playing time by starting nine of the last 10 games, including a 27-save shutout of Roseau on Jan. 22.

But should the Spuds make a run to the state tournament, unlike in past years, it will be because their experienced offense powers them there. Senior twins Tony Uglem (16-19-35) and Nick Uglem (8-16-24), senior Thomas Carey (15-15-30) and junior sniper Aaron Herdt (19-14-33) help give Moorhead two capable scoring lines.

But it won’t be easy for the Spuds to make it three straight section titles.

Second-seeded Brainerd (19-5-0) showed it would be a factor this season despite graduating three 60-point scorers, blitzing Moorhead 8-5 on the Spuds’ home rink on Jan. 10 behind six power play goals. The Warriors also split with preseason favorite Roseau and knocked off Bemidji twice – and has won 15 of its last 16 games. How does coach Jim Archibald keep churning out these surprising Warriors’ teams?

Brainerd plays a gritty and hard-nosed style favored by Archibald, known for exactly that during his playing days at the University of North Dakota. The Warriors will pound opponents physically, frustrating and wearing them down. Archibald has some great athletes capable of playing that style, including junior forwards Cole Smith (21-18-39), Logan Rivard (17-19-36) and Jacob Ellingson (17-19-36) and junior defenseman Chris Pohlkamp (10-18-28). The Warriors are young, but supremely talented. 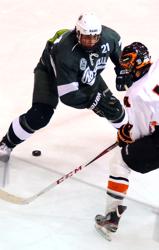 Third-seeded Roseau (16-8-1) was the preseason favorite in the section, largely because of the return of the high-scoring duo of Zach Yon (33-27-60) and Alex Strand (22-33-55), who burst onto the scene as sophomore sensations a year ago. But the Rams dropped to the third seed largely because of an inability to generate offense in 5-on-5 situations. During a mid-January swoon, the Rams were shut out three times in four games.

But Roseau has won four straight entering the playoffs, scoring 25 goals and putting the rest of the section on alert. Despite season-long offensive struggles, the Rams feature one of the top power-play units in the state (43.0 percent) and have two defensemen who can add to that offense in Tanner Okeson (11-20-31) and Cole Bjugson (8-16-24). The seeding may not reflect it, but many feel Roseau remains the favorite.

Fourth-seeded Bemidji (7-15-2) has had more than its share of trials this winter. The Lumberjacks graduated 16 seniors from its section finalist – and then suffered numerous injuries and illnesses that left the team even more shorthanded much of the year.

Sixth-seeded Buffalo (12-11-2) isn’t a high-scoring team, so for the Bison to upset Roseau in the quarterfinals they’ll need to play a tight defensive game. Buffalo did give the Rams a run in last year’s playoffs, only to lose by a goal so there is precedent for upset possibilities. Jack Patnode (12-14-26) leads the Bison in scoring. 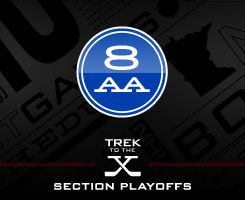 Roseau just as easily could have been our bracket-buster, as the Rams are just the No. 3 seed entering the playoffs. But with one of the state's most potent power play units (43.0 percent), top offensive talent, strong and quick defensemen and competent goaltending, the Rams have the look of a state-tournament team. And after season-long scoring troubles, it appears the Rams have figured it out over the past four games, scoring 25 times.

Fifth-seeded St. Cloud Tech could sneak past a battered Bemidji team in the quarterfinals, but then would likely match up against top-seeded Moorhead in the semifinals. That battle hasn't been kind to the Tigers in recent years, but this is a different Tech team.