Key Section 8A showdown highlights the Hub's top games of the week for Feb. 11-16 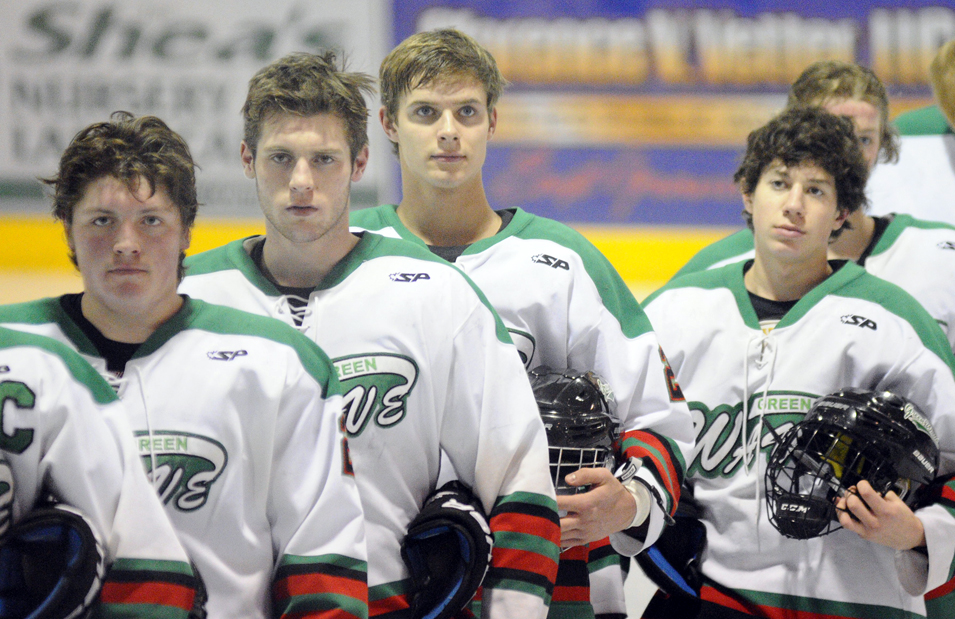 It all comes down to this.

Tuesday night at Ralph Engelstad Arena in Thief River Falls, the regular season comes to a head in Section 8A when No. 4 East Grand Forks (18-2-3) visits No. 8 Thief River Falls (15-8-0). A month into the season, no one could have predicted a photo finish. These were two teams headed into totally opposite directions. 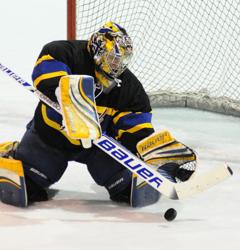 Junior Tanner Holmes has won 10 games in goal for the Prowlers, including a big win at East Grand Forks.

Thief River Falls lurched out of the starting gate like a lame stallion, losing six of its first eight games. Goals were hard to find. The Prowlers – the two-time defending Section 8A champions -- tallied just 13 in that span, as it appeared graduation losses may have finally caught up to the small school. The Prowlers had the look of a team that needed to be put out of its misery.

“The games were competitive, but when you’re only scoring a goal a game, it’s hard to win those games,” said Thief River Falls coach Tim Bergland. “Guys were starting to press.”

They sure recovered nicely.

Immediately after a 3-2 home loss to International Falls dropped its record to 2-6-0, Bergland’s team responded with an 11-game winning streak, including an impressive 6-2 victory at East Grand Forks on Jan. 22. The Prowlers were back.

“We just tried to come into the game thinking that it was just another game,” said Logan Engelstad, who leads the team in scoring with 26 goals and 40 points. “The games that really matter are the ones coming in February.”

Engelstad had stepped into the role of regular points-producer and had a hat trick against East Grand Forks the first time around. Isak Bergland (16-23-39) and Ian Lund (10-7-17), the team’s other double-digit scorers, have also shown the ability to dent the twine. While the Prowlers still aren’t an offensive powerhouse, they have picked it up over the last two months and now average 3.65 goals per game.

Defensively, the rugged Prowlers remained outstanding even as they were losing early. Led by rangy Chris Forney (7-19-26) and tough Adam Pancoast (4-10-14) and Grady Pederson (1-6-7), Thief River Falls has allowed just 2.17 goals per game. Forney is a multi-faceted defenseman who can both add offense as well as shut down an opposing offense. Pancoast and Pederson are more stay-at-home defensemen. In goal, junior Tanner Holmes (10-7-0, 2.04, .926) has seen the majority of time, while senior Ryan Daniels (5-1-0, 2.50, .908) has provided good minutes when called upon. 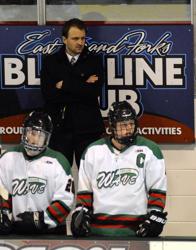 Tyler Palmiscno has the Green Wave on the verge of earning the No. 1 seed in the Section 8A playoffs.

Meanwhile, East Grand Forks streaked to the front of the pack with an opening 13-0-2 burst to the season. The Green Wave were the last team in the state to lose, finally falling 4-3 at Moorhead on Jan. 17.

“Not losing all year, we never talked about our record or anything like that,” said coach Tyler Palmiscno after the first loss. It became a brief two-game losing streak when Thief River Falls beat the Green Wave on Jan. 22.

Until that point, everything had been going the Green Wave’s way. They already had seven shutouts in 15 games and were scoring goals in bunches. That’s a good recipe for success. East Grand Forks is still a strong contender to represent Section 8A at state and has gone 5-0-1 in the six games since that brief two-game losing streak, including two more shutouts to bring its total to a state-leading nine.

It may be a slight surprise that the Green Wave have been this good this season. Many top players are underclassmen, although a few key veterans anchor the effort.

As we said, it all comes down to this.

Then the battle starts anew. 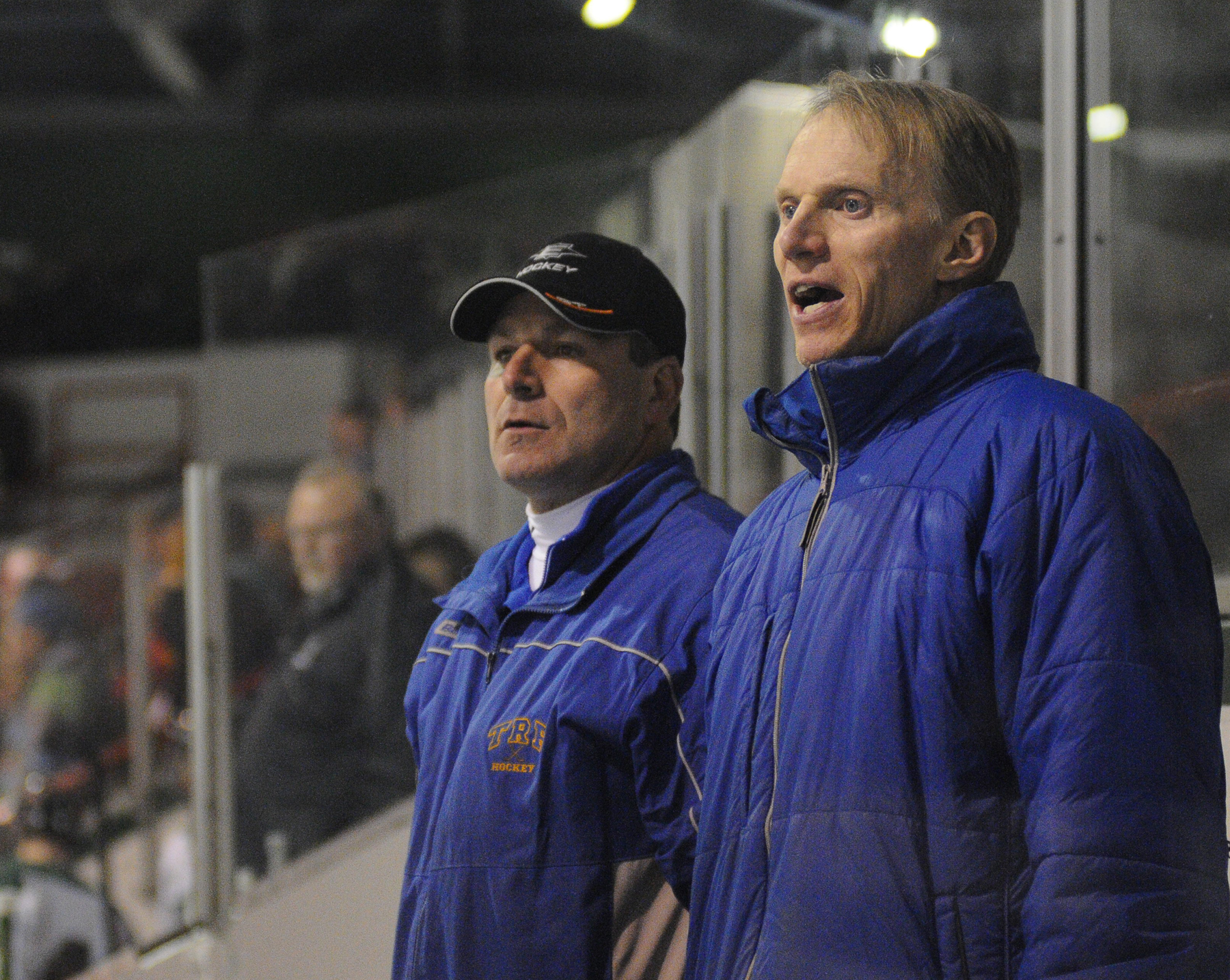 This could become a nice tradition. Two unbeaten conference champions -- Minnetonka from the Lake and Blaine from the Northwest Suburban -- cap the season with a showdown at the State Fairgrounds Coliseum in St. Paul. Blaine coach Dave Aus is hoping to make it a regular series with as many as three games between the best each conference has to offer and this is the opening salvo. His No. 8 Bengals (17-4-1) are certainly a state championship contender and have won all 15 NWSC games heading into the final week. Speedy Tyler Cline (23-21-44) leads the fast-skating Bengals in scoring. No. 4 Minnetonka (17-5-1) is similarly dominating the Lake by winning all seven of its league games -- a surprise considering the toughness of the league. Skippers' defenseman Tommy Vannelli (8-22-30) was just named a Mr. Hockey finalist and will be tested by the Bengals' team speed.

A Section 6AA semifinal preview? It certainly could be that as these two Lake Conference powers will most certainly find themselves among the top four seeds in the section. No. 4 Minnetonka (17-5-1) should wrap up a top-two seed with a victory and a sweep of the season series. The Skippers rallied for a 5-3 victory on Jan. 26, scoring three times in the third period. Austin Burt (7-3-10) had a huge game, netting a hat trick for the Skippers, although leading scorer Max Coatta (23-28-51) notched the game-winner in the third. No. 13 Eden Prairie (11-11-1) has has an unpredictable season, hovering around the .500 mark all year. The Eagles' longest winning streak has been just two games (three times) and the longest losing skid has been three games. Coach Lee Smith's team remains dangerous, though, led by three Division I recruits in Steven Spinner (15-24-39), Luc Snuggerud (4-31-35) and Hunter Warner (3-5-8).

Eagan has been rolling through both the South Suburban Conference and its Section 3AA opponents all season -- with one notable exception. Back on Jan. 12, No. 20 Eastview (14-8-1) shocked No. 7 Eagan (19-3-1) in a 4-2 defeat at the Eagan Civic Center. It remains the only conference loss for the Wildcats. Eastview leading scorer Ryan McNamara (21-13-34) netted two goals. Lightning goaltender Zach Driscoll (11-3-1, 1.60, .947) stopped an amazing 64 shots, a high-point in his sophomore season that has him leading the state in save percentage. He's been tough to beat and hasn't allowed a goal since the third period of a Jan. 29 victory over Apple Valley -- 111 minutes, 31 seconds and counting. Eagan snipers Zach Glienke (24-29-53), Cullen Willox (27-23-50), Jack Jenson (15-24-39) and Jesse Gabrielle (13-26-39) are most certainly looking forward to the rematch. Glienke was just named one of the Mr. Hockey finalists.

The final round of Lake Conference games continues to feature some great ones scattered throughout our top 10, including No. 13 Eden Prairie (11-11-1) against No. 5 Edina (18-5-0) in what could be a battle for second place on the final day of the regular season.  The Hornets hold a one-game lead courtesy of a 5-4 victory on Jan. 31 in which sophomore Dylan Malmquist (18-16-34) tallied the game-winner just 1:02 into the third period. The Hornets also took a one-goal victory (4-3) in their home holiday tournament on Dec. 22, with leading scorer Connor Hurley (14-27-41) adding three assists. Edina senior defenseman Parker Reno (1-17-18) was just named as one of 10 Mr. Hockey finalists. Eden Prairie could have a Mr. Hockey candidate or two next winter as three juniors -- Steven Spinner (15-24-39), Luc Snuggerud (4-31-35) and Hunter Warner (3-5-8) -- have already given Division I commitments.

No. 6 Wayzata (17-6-0) hopes to get back on track in a televised game against No. 5 Edina (18-5-0). The Trojans had been ranked No. 1 in the state in early January after an impressive Sports Authority Holiday Classic title, but have lost four of their last six games. Wayzata's normally strong defense has allowed an average of four goals in those four losses, something that will have to be tightened up heading into the playoffs. Edina -- which itself was ranked No. 1 before a mid-season swoon -- was responsible for one of those defeats, a 5-4 victory Jan. 26 at the Plymouth Ice Center in which they knocked out goaltender Aaron Dingmann (13-5-0, 1.91, .921). Dingmann has been terrific overall, however, coming back from missing almost all of his junior season due to injury.

Section 7AA seeding has been a quagmire all season, as preseason favorites have been knocked from their perches, unheralded teams have risen, and upsets have shaken the rankings more than Davy Jones on the tamborine (ask someone old about that reference). Senior-laden St. Francis (16-8-0) has been responsible for some of it, upsetting Grand Rapids on Dec. 28 at the IRA Civic Center. The Saints are looking for another signature win to climb the seedings and have one more shot in their season finale against No. 16 Cloquet/Esko/Carlton (13-8-2). The Lumberjacks are known for their firepower with a potent first line of Westin Michaud (25-28-53), Beau Michaud (20-32-52) and Karson Kuhlman (24-19-43), but the Saints have the highest-scoring player of the bunch in Zach Foesch (36-25-61). The senior moved up to forward this year and his goal-scoring has exploded as he has six hat tricks and 22 goals in his last 10 games.

Talk about a grudge match. Without a doubt, No. 8 Blaine (17-4-1) certainly hasn't forgotten what happened against Maple Grove (13-11-0) in last year's Section 5AA championship game, a record-setting 15-1 victory by the Crimson that ended a six-year state tournament run by the Bengals. But while the Bengals would love to put another hurting on the Crimson -- Blaine won 5-2 back on Jan. 17 -- it isn't quite the same. Blaine returned many of the same players who were part of that section final, but Maple Grove has an almost entirely new squad this year. The Crimson graduated 10 key seniors, although leading scorer Sam Valerius (18-11-29) and double-digit scorer Nate Erickson (11-10-21) were there.

When these two teams get together, it's not just for bragging rights among the players. It's not just for bragging rights between the schools. Two entire communities are watching and doing whatever they can to help their "boys" get the edge. Welcome to Iron Range hockey between No. 16 Hibbing/Chisholm (12-11-0) and Virginia/MIB (9-14-1). Neither has a great record this year, but it doesn't matter. The Bluejackets won the first meeting, 6-3 on Jan. 12 behind five points (three goals, two assists) from Josh Bestul (13-12-25). Hibbing's Adam Johnson (16-26-42), who has played both forward and defense this year for coach Mark DeCenzo, was recently named a finalist for the Mr. Hockey award. Zach Voss (20-24-44) and Travis Kemp (15-20-35) lead the Blue Devils in scoring.

It wouldn’t be accurate to call this the first “Wood Stick Game” as teams played for years with the old straight-bladed clubs before aluminum came into vogue and then the multiple-hundred dollar composites of today. But it is a throwback game in that both teams have agreed to use only wooden sticks – Christian Pro 1000s --  that cost a tenth of the new-fangled models. It should make for an interesting twist between these two neighborhood rivals on the final day of the regular season at the Shoreview Ice Arena. North St. Paul (9-12-1) boasts of the crafty Oliver twins, juniors Justin (13-23-36) and Tyler (13-14-27), and senior Mark Meister (12-7-19). Mounds View (12-8-3) is a senior-laden group anchored by Andrew Bjorklund (14-19-33), Jacob Tretsven (16-16-32), Darian Romanko (12-16-28) and AJ Rupert (11-12-23).