Year of the Cats 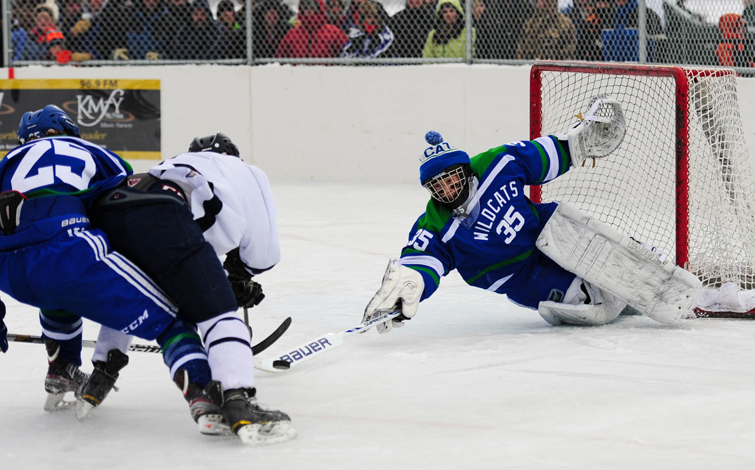 Eagan goaltender Andrew Lindgren pokes the puck away from a Hibbing/Chisholm forward during a Hockey Day Minnesota game in Grand Rapids. The Wildcats are the top seed in the Section 3AA playoffs. Photo by Adam Crane 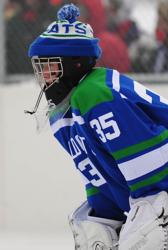 This was supposed to be the year that Eagan came back to the pack in Section 3AA. It was, wasn’t it? At least that’s what most observers thought.

Reality has been oh, so much different.

To be fair, the two-time defending section champions had ridden the Class of 2012 through the most successful stretch in school history. Eagan’s senior class included two Mr. Hockey finalists in Will Merchant and all-time leading scorer Michael Zajac, as well as 55-point scorer Nick Kuchera, highly-regarded defensemen Sam Wolfe, Eli May and Derick Kuchera and regular goaltender Christian Butler.

A pretty good case could be made that roster of graduates could have comprised its own line on the All-State team. With every one of them graduating last spring, Eagan coach Mike Taylor sure seemed to have a rebuilding effort on his hands.

Instead, the Wildcats have ripped off another impressive season and should challenge last year’s 25 victories. Eagan (21-3-1) earned the top seed in the section again and is on an 11-game winning streak. The section leaderboards are peppered with Wildcats players, including the top four scorers.

Seniors Zach Glienke (30-30--60) and Cullen Willox (28-26--54) played more complementary roles on last year’s senior-laden team, but the pair has become the go-to guys this winter. Glienke has been drawing plenty of college interest and was recently named one of the Mr. Hockey finalists. He’s a towering forward with good hands, while Willox is physical and strong on the puck. With the transfer of junior Jack Jenson (16-25--41) from St. Thomas Academy and the emergence of freshman sensation Jesse Gabrielle (15-28--43), the Wildcats can run two top lines that are tough to match up against.

With that type of depth and balance, it appears as if Taylor didn’t rebuild, he simply reloaded.

The reality for the rest of Section 3AA? It’s going to be tough to knock off Eagan. 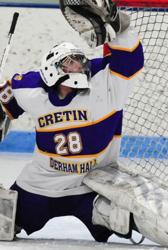 After some early-season struggles, Cretin-Derham Hall (16-8-1) surged over the past six weeks to earn the No. 2 seed. The Raiders entered the new year with a mediocre record (5-5-1) and then ripped off an 11-3-0 closing stretch that included big victories over White Bear Lake, Mounds View and Stillwater. Even one of the losses certainly drew attention, as the Raiders suffered a 4-3 loss to Edina in which they led 3-0 in the second period.

But where the Raiders have improved most is in their own zone. Since the new year, Cretin-Derham Hall has been stingy defensively, which also coincides with the emergence of sophomore goaltender Trent Jancze (13-2-0, 1.68, .934). He’s made 13 of his 15 starts since Jan. 3 and allowed more than two goals just twice in that span. He’ll be a big key to the Raiders’ upset hopes.

Third-seeded Eastview (15-9-1) has its own brick wall in goal in sophomore Zach Driscoll (12-4-1, 1.87, .938), as Eagan discovered back on Jan. 12. Driscoll stopped an amazing 64 of 66 shots as the Lightning earned a 4-2 upset victory – and handed the Wildcats their only section loss of the season. Driscoll has made stopping pucks a regular occurrence, as he has the third-best save percentage in the state. He’s allowed more than three goals just once all season, but that high point was seven in a Feb. 12 rematch with Eagan.

As good as Lightning leading scorer Ryan McNamara (21-14--35) has been this year, he’s even better on the lacrosse field. He was named the state’s player of the year and led the program to the state championship last spring.

Fourth-seeded East Ridge (13-10-2) was also on a roll entering the final week of the regular season, having won five straight until falling 5-3 to Forest Lake in the season finale on Valentine’s Day. The Raptors weren’t blowing anybody out during that stretch, as three of the wins were decided by a single goal, but they are playing their best hockey at the right time. Derek Hammer (15-10--25), Ian Penvose (13-11--24) and Jack Greeley (8-15--23) lead the Raptors in scoring. 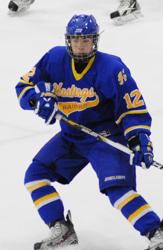 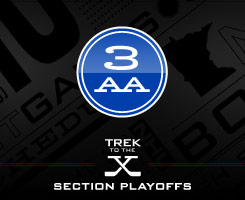 So much for rebuilding. Despite graduating the best senior class in school history last spring, Eagan is right back on top of the Section 3AA heap thanks to big seasons from some of last year's role players. The additions of junior Jack Jenson as a transfer from St. Thomas Academy and super freshman Jesse Gabrielle haven't hurt either.

Let's be honest. Eagan is the overwhelming favorite to get to state for the third straight year, but the Wildcats aren't invincible. Third-seeded Eastview proved that with a regular season victory in which goaltender Zach Driscoll stood on his head. He could do it again and lead the Lightning to the promised land.