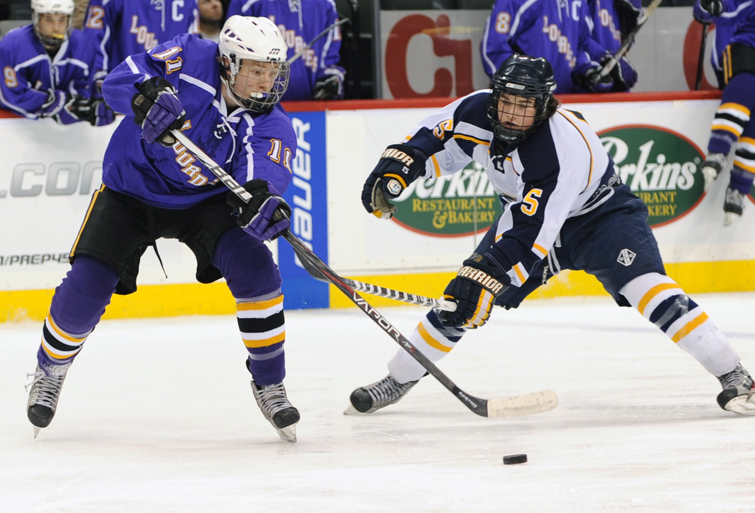 Nathan Roth (11) and Rochester Lourdes hope to get back to the X for the Class 1A state tournament for the fifth straight season. Photo by Helen Nelson.

Strength of schedules isn’t much of a, well, strength in Section 1A.

Most of Southern Minnesota’s small-school teams spend the regular season beating up on each other while sticking primarily to the confines of the Big 9, Missota and South Central conferences.

Rochester Lourdes is a notable exception.

That murderer’s row of opponents doesn’t include the Eagles’ lineup of big-school foes, most notably defending state Class 2A champion Benilde-St. Margaret’s, 20-win Tartan, Holy Family Catholic and Prior Lake.

For Section 1A prognosticating purposes, Lourdes’ most important games were against Mankato West, New Prague (twice), Albert Lea, Red Wing and Northfield. The Eagles went 6-0-0 against section opponents, winning those games by a combined score of 27-9. 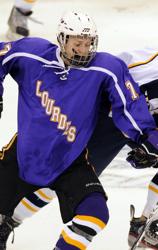 The Eagles feature two fantastic senior forwards in Jason Samuelson (25-40—65) and Alex Funk (34-27—61). Samuelson and Funk, standouts for Lourdes since they were freshmen, rank No. 1 and 2 in career scoring for a program that has a history of producing top-end players.

No. 2 seed Mankato West (20-5-0) lost to Lourdes 3-2 on Jan. 8 in Rochester in what very well could be a preview of the section championship. The Scarlets finished second in the Big 9 behind Class 2A Rochester Mayo, a team they overwhelmed 7-3 late in the regular season. West suffered a 2-1 loss to Owatonna and snuck past Faribault 6-5 as it closed out the regular season in less-than-impressive fashion.

Like Rochester Lourdes, the Scarlets boast an abundance of firepower. Juniors Derek Frentz (33-30—63) and Galt Goettl (21-28—49) each scored seven power-play goals as West converted 36.2 percent of its opportunities.

West has plenty of puck-moving defensemen who trigger an effective transition game, including juniors Scott McKissick (3-28—31) and Max Mettler (3-16—19).

No. 3 seed New Prague (15-8-2) was hit hard by graduation, then suffered the surprising off-season departures of two more top-end players before entering what appeared would be a bleak season.

How did the Trojans respond to all that adversity? They merely won the Missota Conference for the first time in program history. Highlighting the season was a crucial 5-3 victory over longtime Missota king Holy Angels on Feb. 5. 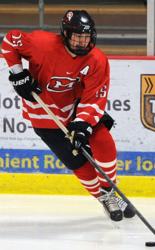 New Prague closed the regular season with a flurry of games against section opponents, including a 4-1 loss to Rochester Lourdes followed by a 2-1 overtime win over Red Wing and 6-2 triumph over Northfield.

Juniors Austin Isaacson (12-14—26) and Austin Killian (11-11—22) are New Prague’s only double-digit scorers, although four other players scored at least six goals. Senior Evan Bisek (15-8-0, 2.26, .924) took over as the workhorse in goal and was outstanding in his first season playing significant minutes.

Senior Spencer Jones (16-8-0, 2.63, .912) turned in a solid season in goal for a remarkably consistent team that didn’t have any signature victories or stunning losses.

One of the state’s largest sections (12 teams), 1A features a full slate of first-round games starting Tuesday, Feb. 19.

Le Sueur-Henderson/St. Peter won both regular season meetings against East, including a 6-1 triumph on Feb. 1. The Bulldogs get outstanding goaltending from senior Chris Amsden (12-12-1, .2.27, .924), making them a threat to stage and upset or two in the postseason.

The Tigers are led by Roy Nystrom, who is in his 47th season coaching high school hockey, including the last 40 in Albert Lea. Nystrom has a history of engineering playoff upsets, which could mean trouble for Northfield should the Tigers get past La Crescent.

Sophomore Cody Ulfers (16-13—29) is the Bluejays’ leader in goals and points.

The Wingers didn’t get their first win of the season until Jan. 22, but they went 4-6-0 to close the regular season and could be dangerous in the playoffs because of their rugged regular season schedule and history as one of southern Minnesota’s top programs. Seniors Alex Rezansoff (14-13—27) and Taylor Hanson (12-11—23) generate the bulk of Red Wing’s offense. 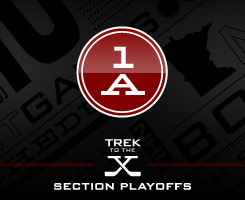 Think of the headline possibilities if Mankato West should knock off Rochester Lourdes in the section championship: Scarlets Fever! and Seeing Scarlet! immediately come to mind -- for better or worse. West looked like a precision machine in a 7-3 rout of Rochester Mayo late in the regular season, and if the Scarlets can match that performance when it counts in the playoffs they will end Rochester Lourdes' four-year run as section champs.

Few coaches have more tricks in their arsenal than Albert Lea's Roy Nystrom, who seemingly has been coaching the Tigers ever since ice was invented (actually, it's only been 40 years). Nystrom's teams typically find another gear in the playoffs, and that could be enough to get the Tigers past La Crescent and Northfield and into the section semis.