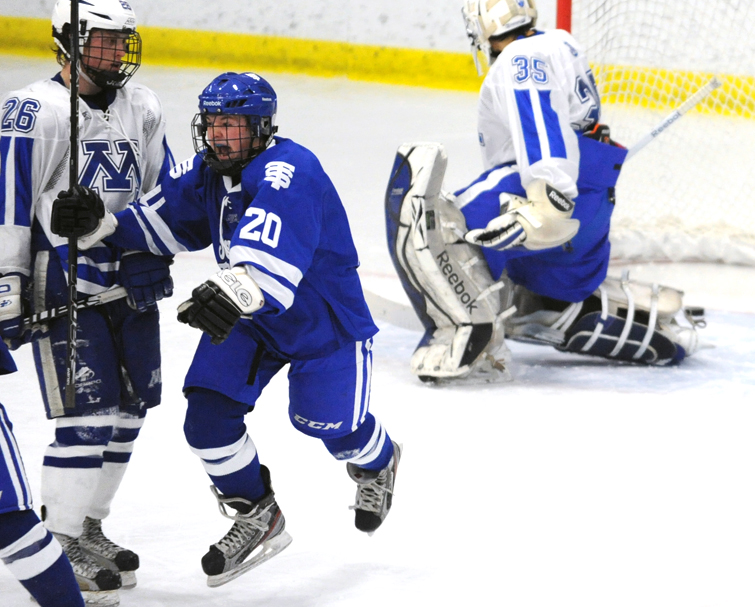 St. Thomas Academy's Christiano Versich celebrates a goal earlier this season against Minnetonka. The two-time defending Class 1A state champions have shown they are one of the best teams in Minnesota regardless of class. Photo by Katherine Matthews.

What St. Thomas Academy has done for nearly three consecutive seasons has been nothing but pure dominance.

The Cadets are the two-time defending state Class 1A champions and have not lost to a Class 1A team since March 5, 2010 -- an amazing 47-game streak that dates back to that 2010 Section 4A finals setback to Mahtomedi.

The Cadets will be making the move up to Class 2A next season, but they will be eyeing a third consecutive state title as their departing gift from Class 1A.

St. Thomas Academy has played seven games against teams in Section 4A this season, outscoring them by a combined total of 48-5.

The Cadets are one of the hardest teams to score on in the state. They have only allied 32 goals all season and have a 1.26 goals-against average.

Senior goalie David Zevnik has two state championships under his belt as the starting goalie and has a 19-2-2 record along with a 1.32 goals-against average and a .938 save percentage.

He has an abundance of help on the blue line where the Cadets are loaded with talent.

Offensively St. Thomas Academy have had success from its top line of Tom Novak (25-22--47), Christiano Versich (12-22--34) and senior captain Alex Johnson (14-19--33). Near the midpoint of the season the Cadets switched up their lines, and those three have worked to near perfection.

If there has been a thorn in the side of the Cadets in recent memory it would have to be No. 2 seed Mahtomedi.

In 2009 and 2010 the Zephyrs upset St. Thomas Academy in the Section 4A finals. They are also the only team in the section to at least hang with the Cadets this season.

The Zephyrs do not have a big spark plug to ignite them, but they do have some consistent options. Matt Bonine (15-14--29) leads in both goals and points and is one of five Zephyrs with more than 25 points this season.

If Mahtomedi wants to make a run at the Section 4A title again it will need a big showing from goalie Colin Denis (10-4-0), who has a 2.93 goals-against average and a .879 save percentage. 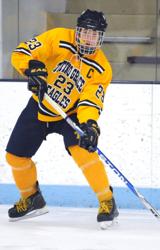 No. 3 Totino-Grace (19-6-1) has been in the Section 4A championship game the past two seasons and lost a heartbreaker to the Cadets in overtime last season 2-1. The Eagles know how to make a deep run and will rely heavily on Mr. Hockey finalist T.J. Roo (27-45--72) and leading goal scorer Derek Lodermeier (32-33--65). T.J.'s younger brother Carter Roo (17-29-46) has played on the same line with T.J. and Lodermeier for parts of the season, but the Eagles will need other lines to step up as well if they want to get to the section finals for the third straight year and possibly have one last crack at St. Thomas Academy. With the No. 4 seed St. Paul Academy (17-8-0) will look to its goalies to help it navigate the section. Nick Anderson (12-7-0) and Noah Parker (4-1-0) have helped St. Paul Academy build a 2.15 goals-against average and a .917 save percentage. St. Paul Academy does pack a little scoring punch with Drew Blackmun (23-29--52) and Jared Mickelson (16-28--44) eclipsing the 40 point mark. No. 5 Chisago Lake (16-8-1) has been known to throw a scare into some of the favorites in this section in the past and might have the capability to do so again this season. Similar to St. Paul Academy, the Wildcats have used a two-goalie system for most of the year. Sophomore Jacob Dubose (10-6-0) has started most games, but freshman Bryce Thompson (6-2-1) has jumped in and done a nice job posting a 2.06 goals-against average and a .915 save percentage. Senior captain Bradee Thompson (19-11--30) leads Chisago Lakes in goals scored and will need to keep that pace going if he wants his team to advance and make some noise. Spring Lake Park (13-12-0) enters section play with the No. 6 seed is led in scoring by the trio of freshman Austen Long (23-19--42), junior Pete Sienko (9-30--39) and sophomore Deven Sunell (10-21--31). It is also coming into the postseason hot offensively, scoring 21 goals in its past two games. If the Panthers win their first round game they will take on Totino-Grace in the quarterfinals. The Eagles beat Spring Lake Park by identical 4-0 scores in their two regular season meetings. 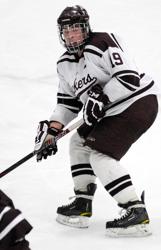 Scott Macho is in his first season as head coach for seventh-seeded South St. Paul (8-16-1) and is aiming to make some noise in Section 4A and get the Packers back to the thrilling days when they were state tournament regulars in the 1980's and 1990's. The Packers do not have the elite scorers like some of the higher seeds, but they do have balance. Billy Brandecker (16-9--25), Alec Miller (9-12--21) and Jack Pietruszewski (5-15--20) lead South St. Paul in scoring this season. No. 8 Henry Sibley (10-13-2) faced a tough stretch of competition in the latter stages of the season, which included losses to the top teams in each class, Hill-Murray and St. Thomas Academy. Senior Jack Coleman (20-9--29) leads Henry Sibley in goals and points will need to keep the scoring touch going in the postseason to help his team advance. St. Paul Johnson (9-16-0) was seeded ninth and will play Henry Sibley in the first round. The Governors have made it to the state tournament 22 times and have four state titles but have not made it to the big dance since 1995. St. Paul Johnson is led by Matt Ranum (12-6--18) and Justin Howell (14-4--18). No. 10 seed Simley (5-20-0) will look to avenge a tough 4-3 loss to end the regular season to South St. Paul and will face the Packers again in the first round. It will need to get some scoring into the postseason as no player recorded double-digit goals this season. Aaron Leafgren led Simley with nine goals. No. 11-seeded Achiever Academy (15-7-1) will square off against Spring Lake Park in the first round. The Aces, a first-year program, have some scoring punch. Ryan Finnegan (21-39--60) leads the team in points while Cory Sprague (36-21--57) and Baron Thompson (30-15-45) each reached the 30-goal plateau. St. Paul Highland Park (1-23-1) rounds out the section with the No. 12 seed and will play Chisago Lakes in the opening round. Dylan Zavoral (13-8--21) leads the Scots in goals and points. 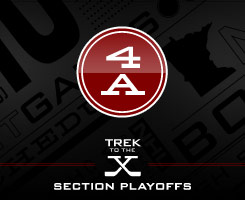 The two-time defending Class 1A champions are loaded once again this year and have been the state's No. 1-ranked teamfor most of the season. The Cadets have depth on defense and senior David Zevnik is as good as they come in goal. Some coaches have said St. Thomas Academy might be the best team in the state in either class, and the Cadets have made their case with victories over Class 2A powers Hill-Murray, Edina and Benilde-St. Margaret's. St. Thomas Academy also has a victory over powerhouse Shattuck-St. Mary's.

Choosing a No. 2 seed as a bracket buster might not seem like much of a stretch, but considering how heavily favored the Cadets are in Section 4A, any team could be tossed into the mix as a bracket buster. The Zephyrs have lost twice to St. Thomas Academy this season but have given the Cadets more trouble than most others in the section. There is a bit of history on Mahtomedi's side as well, as it upset St. Thomas Academy in 2009 and 2010 section finals.