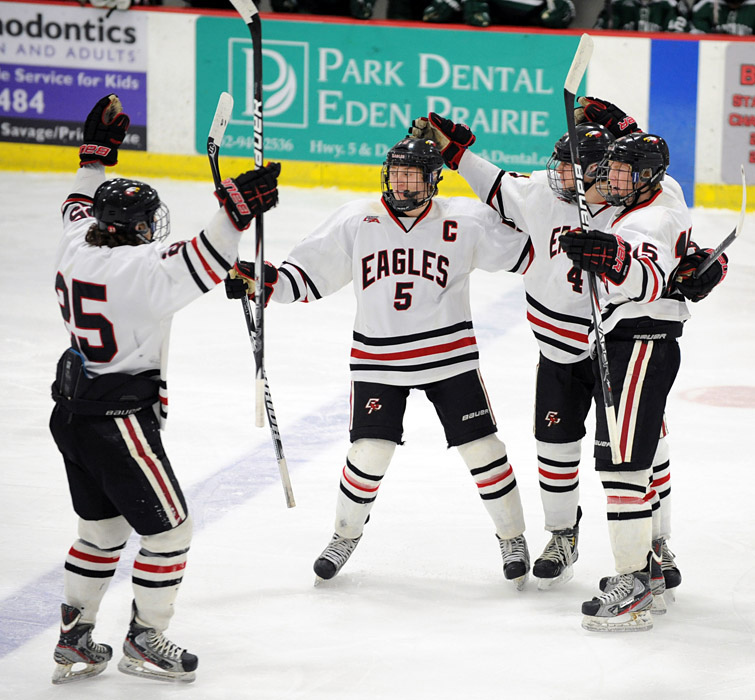 Eden Prairie's Mason Bergh (5) is congratulated by teammates after scoring in the Eagles' 7-1 triumph over Holy Family Catholic. Photo by Katherine Matthews

Mason Bergh had scored, but Spinner had been given credit for the third-period goal over the public address system.

“I tried to tell them,” Spinner said with a shrug after the Eagles eased past Holy Family Catholic 7-1 in the quarterfinals of the Section 7AA playoffs on Thursday, Feb. 21, at the Eden Prairie Community Center. “It was a good play, but they just announced it wrong.”

When Spinner really did score later in the third period the goal was his second of the night. Naturally, the large and loud Eden Prairie student section thought it was his third.

Hats came raining down on the ice.

“I didn’t earn it,” Spinner said. “But it was still awesome to see.

It was that sort of night for Spinner and the Eagles, when a mix-up only added to the party atmosphere. 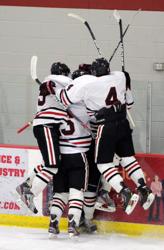 Eden Prairie had plenty of opportunities to celebrate during Thursday's 7-1 victory over Holy Family Catholic. Photo by Katherine Matthews

Most often it was Spinner whipping the unusually large and rowdy crowd into a frenzy. When Spinner wasn’t setting up goals he was scoring them. When he wasn’t scoring goals he was dishing heavy hits. When he wasn’t doing all of that, well, he was required to serve a couple unsportsmanlike conduct penalties.

“You can’t expect that out of anybody,” Eden Prairie coach Lee Smith said about Spinner’s big night. “We just need him to put pucks on the net. He’s a good shooter.”

A 5-foot-11½, 195-pound junior forward, Spinner has 17 goals and a team-best 45 points in 24 games this season. None of which comes as much of a surprise. The Nebraska-Omaha recruit has been putting up big numbers ever since his youth hockey days.

“He’s a great kid,” Rahn said. “The thing about him is he is tenacious. He’s always been the hardest working player on the ice.”

A big, strong player with speed and a wicked shot? Who works hard, too?

Yeah, that pretty much sums up Spinner, whose first goal came in the first period on a wicked 20-foot wrist shot. Spinner’s third-period goal came on a breakaway. He was patient in getting Holy Family Catholic goaltender Derrick LaCombe to commit first, then deftly lifted the puck high into the net.

Did we mention that Spinner has great hands?

“And he’s strong, too, so it’s hard to move him off the puck,” Eden Prairie defenseman Hunter Warner said. “Having him on your team really helps. He can bury his chances."

Not so welcome home 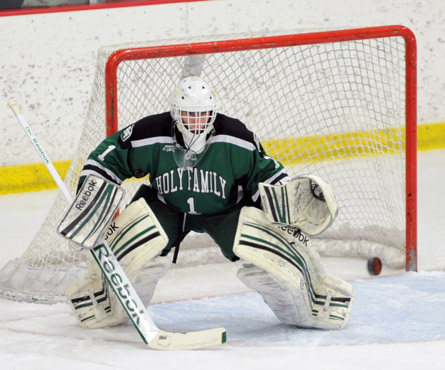 LaCombe and Gerdes were on the ice together for the first time this season on Thursday in the quarterfinals of the Section 6AA playofs.

LaCombe, now playing for Holy Family Catholic after an offseason transfer of schools, received a rousing round of boos when he was announced as a starter at the Eden Prairie Community Center.

Gerdes received the loudest ovation when he was announced as an Eagles starter.

After the fans had stated their case, the Eagles did the same. Lighting up LaCombe and the Fire for five first-period goals en route to a 7-1 victory.

“Actually, LaCombe and I are pretty good buddies.,” Eden Prairie defenseman Hunter Warner said. “We know if he plays his game, he’s a great goaltender. But we weren’t going to let him beat us.”

LaCombe went 11-7-0 with a 3.24 goals-against average and .898 save percentage for Holy Family Catholic this season. He made 44 saves on 51 shots against his old team.

“Sometimes you get overhyped, and he was so amped up for this game because he was coming back (to Eden Prairie),” Holy Family Catholic coach Noel Rahn said. “He’s a competitor, and he came out strong in the second period.

“He’s a great goalie, but sometimes I think you can get overhyped.”

No. 4-seeded Eden Prairie scored five unanswered goals in the first period en route to a 7-1 triumph over No. 5 Holy Family Catholic in a stunningly lopsided Section 6AA quarterfinal matchup on Thursday, Feb. 21 at the Eden Prairie Community Cener.

Nic Bentz scored 1 minute, 57 seconds into the first period for the Eagles (13-12-1), who also got goals from Mason Bergh, Brady Schoo, Jack Keeley and Steven Spinner before Holy Family Catholic (18-7-0) ended the run with a power-play goal by Joey Marooney with 36 seconds left in the opening period.

After a scoreless second period, Spinner and Bergh each added their second goals in the final period as Eden Prairie continued to control long stretches.

The quarterfinal loss was the second in as many seasons for Holy Family Catholic since it opted up to Class 2A. The Fire lost to eventual state champion Benilde-St. Margaret’s 7-0 in last year’s playoffs.

Sophomore Shane Gersich, an NHL prospect who has committed to play at the University of North Dakota, was limited to just a few quality scoring chances by Eden Prairie's shutdown defense.

1. Steven Spinner, Eden Prairie
The feisty junior  scored twice and was incorrectly credited for a third goal. That mistake allowed the large and boisterous Eden Prairie student section to joyously toss hats on the ice. Two goals? Three? The total didn’t really matter, as Spinner, who has committed to play at Nebraska-Omaha, was creating -- and finishing -- scoring chances all night with his speed and physical play.

2. Luc Snuggerud, Eden Prairie
The  junior defenseman routinely rushed the puck out of the Eagles’ zone all the way into the Holy Family Catholic end, where he would launch shots at besieged Fire goaltender Derrick LaCombe. Snuggerud, another Nebraska-Omaha recruit, was also rock solid in all the gritty areas in the Eagles’ zone, limiting Holy Family Catholic’s potent offense to minimal scoring chances.

3. Mason Bergh, Eden Praire
The senior forward, one of the few holdovers from the Eagles’ state championship team two seasons ago, scored twice and added an assist. His play complimented Spinner’s nicely on a dominant forward line. 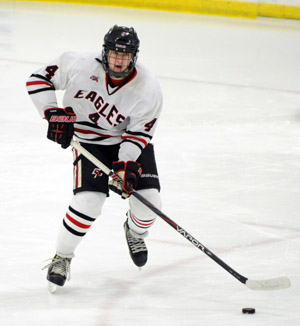 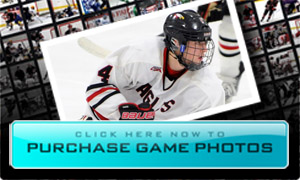 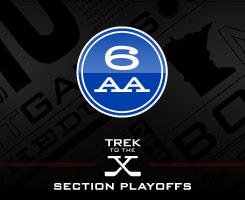