More than a conference title was at stake Tuesday night in Eden Prairie as the Eden Prairie Eagles and Bloomington Jefferson Jaguars faced off for the second time this season. Round one of the heavyweight battle went to Jefferson as they pounded out a 2-1 win at Bloomington Ice Garden January 3rd.

Jefferson entered the game unbeaten and untied in 21 games while the Eagles were an impressive 18-3-0 with their only losses coming to previous top ranked Edina, twice, and Jefferson. All three games were one goal affairs as the Eagles, who are one of the youngest team's in the State, hound the puck and play with a veteran attitude. Sophomore center Kyle Rau and Senior defenceman Nick Leddy led a group of spirited players who were set to face off with one of, if not the deepest teams in the State.

The Jags also keep the puck out of the net as Casey O'Connor leads all goalie in the State with a stingy 1.19 goals against average. He entered the game 19-0-0 and was faced by Andrew Ford who is tied for 5th in the State with a 1.39 goals against average and is 9-1-0 on the season with his only blemish coming to the Edina Hornets in overtime. Neither team play in the same section yet, the game had plenty of implications with a share of the Lake Conference title on the line.

The Eagles jumped out of the gate early and it was a fabulous first shift that dictated the tone of the game. So much so, that Rau fore-checked the Jaguar defencemen into two turnovers. The second resulted in a pass to the slot where Mitch Rogge one timed past O'Connor for the stunning 1-0 lead. They struck again, this time it was Kyle Rau, and on his second shift the sophomore center tipped a well placed Chase Lokken shot past O'Connor for the 2-0 lead at 20th of the season at 2:21.

The Eagles went on to a solid 5-2 win handing the Jaguars their first loss of the season and evening the Lake Conference standings at 15-1-0. Rogge scored his second of the game and 10th of the season as MyFoxHockey.com player of the year candidate Nick Leddy feathered a beautiful pass to the waiting Rogge who raced in on the breakaway and sniped a shot high to the glove of O'Connor for the 3-0 lead at 7:28 of the second period.

The Jaguars flexed their muscle and answered back as Joe Faust picked a puck out of the air with his glove, made a move to the left leaving a sliding Eagle in his dust and picked the top corner on Ford for the 3-1 deficit. The Jags worked to maintain control, yet when they scored, the Eagles had an answer as Jordan Hoffman deposited a rebound past O'Connor for the three goal lead heading to the third period.

Eagle coach Lee Smith wanted his team to continue to skate, and press things and said, “We are not the type of team that can just hang back. We need to force the play and create.” After the Jaguars scored on David Hedlund's goal at 5:21, the precarious two goal lead was confronting the Eagles (19-3-0, 15-1-0).

It did not matter, as they did in the second period, the Eagles turned up their game and it was Lokken who sent another shot about cross bar height to the net. As it descended, O'Connor was handcuffed and the Eagles were up by 3 again. They went on to an impressive victory where Nick Leddy as usual was as good as advertised and looked like the best player in the State. The Eagle defencemen handled a barrage of Jaguar forecheckers whether it was one man, a man and a half, or even three men. They worked the neutral zone, hounded the puck in the Jags zone and closed on their chances. When the Jaguars (21-1-0, 15-1-0) worked possession and chances, Ford shut the door controlling the game from his crease.

It was a well played game by two the best in the State and a replay can be viewed on MyFoxHokey.com. 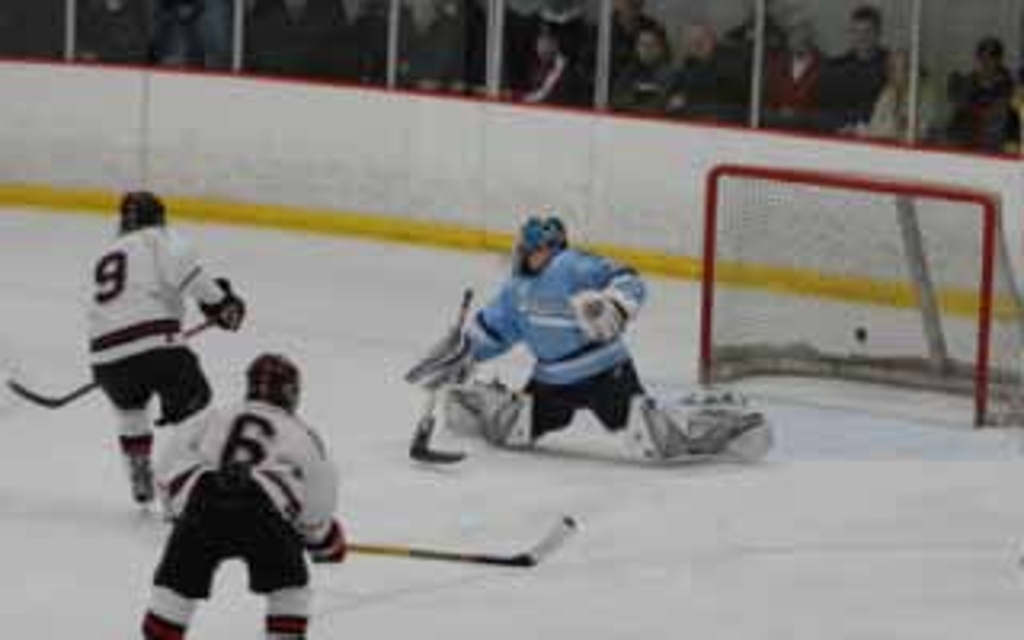