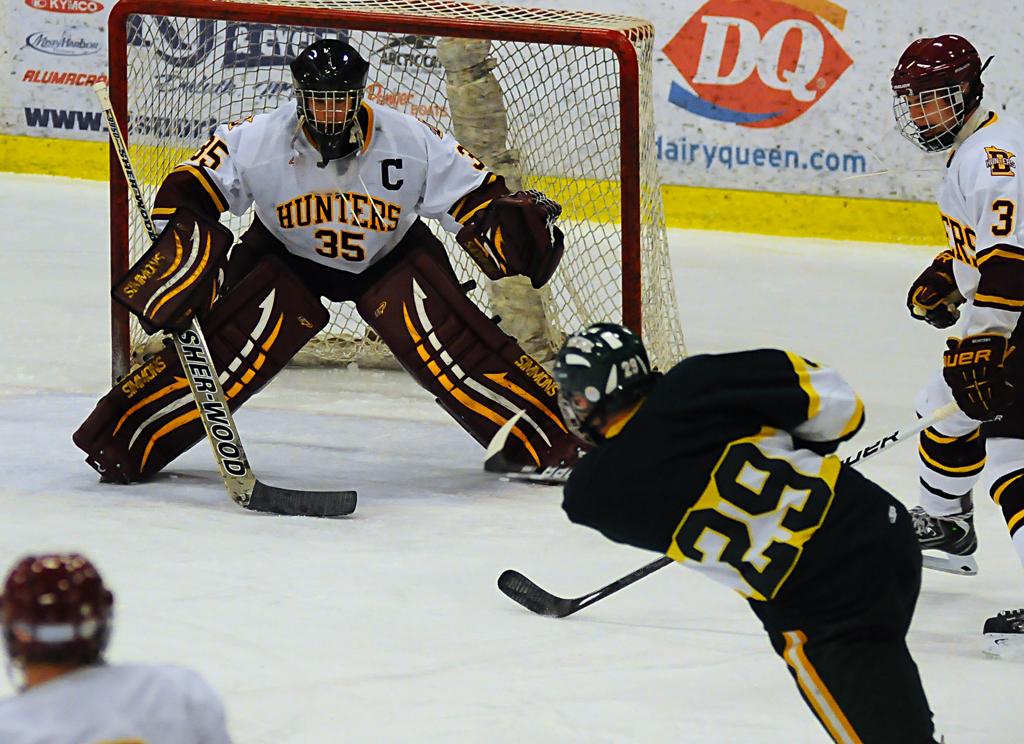 Zach Thompson watches a shot during a game against Mounds View earlier this season. Thompson and his brothers have helped their Duluth Denfeld teammates to the 7A finals.

Zach, Alex and Nick Thompson skated off the ice for the final time last season with plans to push themselves in hockey-related workouts during the summer. They wanted to prepare for this year, which would be the final time all three of them would put on the Duluth Denfeld jersey and play on the same team.

But after rain started to fall in Duluth on June 19, those plans quickly changed. Although the rising water didn’t hit the Thompson’s primary family hard, their grandfather, who lives in Barnum, wasn’t as fortunate.

His business, Thompson Motor Service, along with his house was severely damaged by the floodwaters.

“My uncle and I went out [in Duluth] on the night of the flood, and it wasn’t until the next morning that my brother called and told us about the water in our grandpa’s shop, garage and house,” said Alex, a senior. “Our grandpa lost his house and had three feet of water in his shop and his garage. He had classic cars in there and all of his work stuff, and we didn’t realize until [my brother called] that it was all still in there.”

Without any thought, the three brothers committed themselves to spending as much time as possible helping with the cleanup in Barnum. They stayed at their cabin, spent countless hours pulling items from the destruction left in the flood’s wake and rebuilding the house and shop so their grandpa could move back in.

“The people in Barnum started asking us if we were from Barnum because we were there so much and everyone saw us around town,” Alex joked. “But everyone was really thankful and knew we were working hard to help out our grandpa. He had to live in a hotel for a month, and we spent the majority of our time down there working to get his shop and house back.”

The focus on family left little time for hockey.

“We didn’t play much hockey this summer just because we were too busy working and fixing up,” Alex said. “That was more important than hockey. Even when fall came around, there was still work to do and we were down there almost every weekend.”

But, in a strange way, the time spent off the ice has maybe benefitted the brothers more than any time spent on it could have. The heavy lifting and moving of damaged objects posed as their weight training, and the time with each other helped with the intangible side of the game.

“It’s helped us bond together on and off the ice,” Alex said of his time spent with his brothers this summer. “It wasn’t much lifting weights and hockey workouts. But we were together all the time and I think that’s helped us more than workouts.” 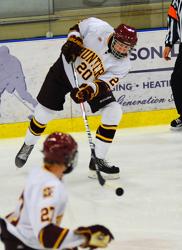 Nick Thompson, the youngest of the three brothers, has emerged as the Hunters' top blue-liner.

Back on the ice

Once school started, the brothers found time to play hockey whenever they could. They played on a local team, the Wings, and traveled almost every weekend. They all agreed that it was good to get back on the ice on a regular basis, and they could sense the chemistry between them instantly.

Even so, people not familiar with the situation speculated as to why the three brothers – most specifically Zach – hadn’t tried to play in the Upper Midwest High School Elite League.

The rumors started to fly.

“There were people saying that my heart wasn’t into hockey and that I didn’t want to play now or at the next level,” said Zach, who has been a mainstay between the pipes for the Denfeld program for five years. “But I believed in myself, and that’s all that mattered. My teammates knew that if I was missing practice, I was missing practice for a reason.

“I knew I was making the right choice, and I knew it would be the right one come playoff time and the end of the year.”

Duluth Denfeld coach Kevin Smalley believed in Thompson and his brothers, too. Smalley was angered at the talk about the lack of drive from Zach and his brothers, but he knew their play on the ice would quiet the critics.

“There’s no question that the Elite League is the premiere league for scouts and kids to get noticed,” Smalley said. “People can believe what they want [about Zach], but he had the opportunity [to play in the Elite league]. People don’t know about his life, and I believe the character those guys have weighs much heavier than Elite League hockey.”

The character of the brothers is something that has seemed to rub off on their Denfeld teammates. After starting the year with little praise from the outside world, the Hunters locked up the top-seed in Section 7A and a spot in Wednesday’s section final.

“They have the leadership and the experience of having been around,” Smalley said of the brothers. “Leaders lead by example, and when the chips are down, those guys get up and keep working.

“We certainly wouldn’t be where we are without them.” 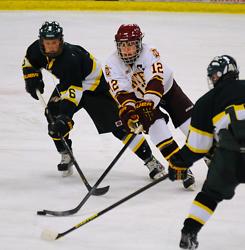 Forward Alex Thompson had a breakout year as one of the Denfeld captains.

This one’s for grandpa

When the Thompson brothers arrive at Amsoil Arena for Wednesday’s Section 7A final, they’ll try to approach it just like any other game.

Easier said than done, but the events of this summer have put things into perspective for the trio.

“We’ve looked at hockey and realized that its not everything, but when you have the chance to play, you might as well give it all you got because it won’t always be there,” Alex said. “The whole team realizes that the opportunity is there if we really want it, and that the chance to reach the goal of state is right there. We just have to go work like we always do.”

The incentive to win on Wednesday will be amplified for the Thompsons, as their grandfather – who has never missed a game – will be in attendance. Since the three brothers spent so much time in Barnum this summer, they said it kind of feels like they are the “Duluth Denfeld/Barnum” hockey team.

“We’re part of both towns and communities,” Alex said. “Our grandpa would be so grateful if we made it down there [to state], and so would the whole town [of Barnum]. He’d probably love to brag about it to his coffee buddies.

“We’ll be playing for him.” 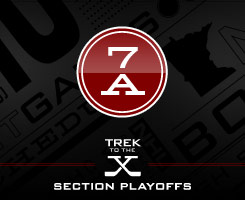 Tag(s): MSHSL Conferences  Duluth Denfeld  Class A  Section 7A  Trek to the X