Buysse scored with 38 seconds left in overtime to send Marshall past Hutchinson 3-2 and on to the state Class 1A tournament for the first time.

The goal capped an improbable run to the Section 3A championship for No. 4-seeded Marshall. It knocked off No. 1 seed Luverne before beating a tough Hutchinson team that was seeded sixth but playing its best hockey of the season.

Marshall junior goalie Mason Campion had to weather the storm early as he stopped 16 shots in the first period and managed to keep Hutchinson off the scoreboard.

“Mason was unbelievable, he and Corey Clark were probably the best players on the ice for us, he made some unbelievable saves that really frustrated Hutch,” Marshall coach Dave Coudert said.

Tory Adams was one of Campion’s main victims. Adams finished with a goal and an assist but could have had more; instead he was stifled by Campion’s glove time and time again.

As the game progressed, Marshall settled down and started playing its game. Despite being outshot 16-11 in the first period, Marshall finished with a 38-34 shots advantage in shots.

Clark, a senior forward, scored a goal and added two assists for Marshall.

“Corey fed it perfectly out front and all I had to do was bury it five-hole, he gave me a good look” Buysse said.

As expected in a section final, Buysse’s goal sparked a frenzied celebration from his Marshall teammates. Even Coach Coudert joined in.

“First I was wondering how it went in, did it really go in?” Coudert said. “Then after you see your players start cheering you start to hug your coaches; it’s a great moment and you’re happy that your players get to experience it.”

When asked if it was too early to start looking ahead to the state tournament coach Coudert said with a smile, “Knowing what our draw might be, we’re just going to sit back and enjoy it on the bus right now and worry about that tomorrow.”

1. Alex Buysse, Marshall
Who else? Buysse, a junior forward, scored the winner with 38 seconds remaining in overtime to send Marshall to state for the first time.

2. Mason Campion, Marshall
The junior goaltender was a rock in the first period stopping all 16 shots he faced. He continued to provide a steadying presence between the pipes as the game wore on, finishing with 32 saves on 34 shots (.941 save percentage). He made a couple huge glove saves in the overtime period that kept the game alive.

3. Corey Clark, Marshall
The senior was the catalyst on offense all night, factoring in on all the goals and finishing with a goal and two assists. He scored the goal with 2:13 left in regulation to send it to OT, and he even got the primary assist on Bussye’s overtime goal. 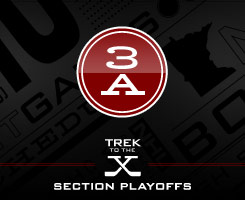