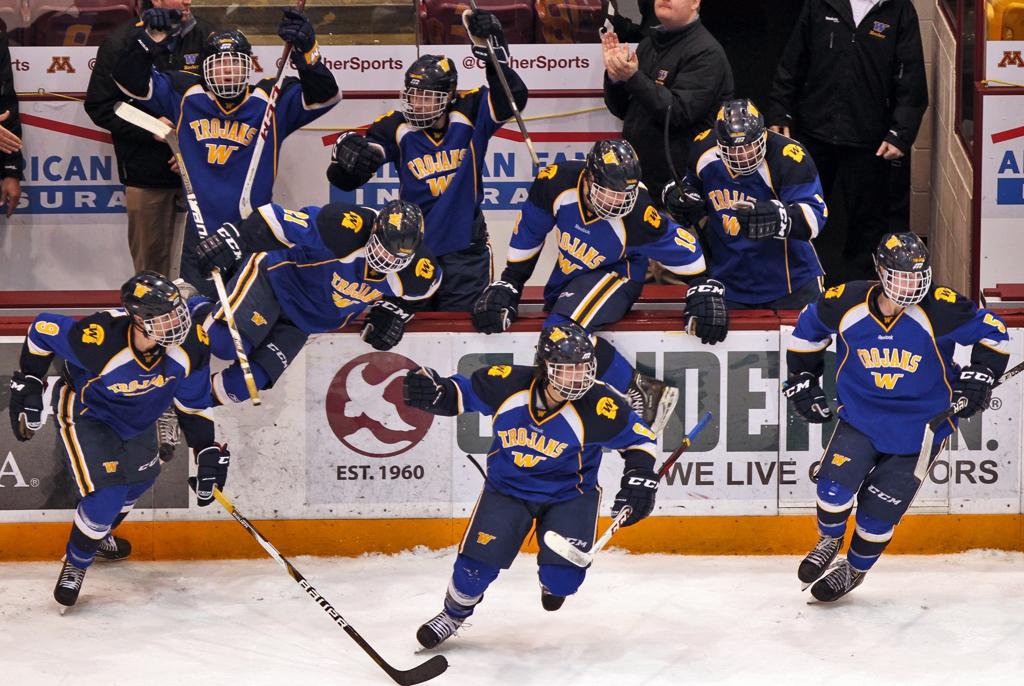 Wayzata players started to celebrate after the Trojans knocked off defending Class 2A champion Benilde-St. Margaret's 5-2 in the Section 6 boys' hockey title game at Mariucci Arena on Wednesday night.

The hit gashed the side of his face, causing him to leave the ice so trainers could bandage the wound. Wahl returned to the bench with his team trailing and vowed to help the Trojans get even.

Wahl later scored a goal, sending a message that the Trojans would not bow even when bloodied. No. 8 Wayzata pulled away for a 5-2 upset of the defending state champion Red Knights on Wednesday at Mariucci Arena.

Five different players scored for the Trojans, who returned to the state tournament for the first time since 2004. Wayzata also kept the Red Knights' high-scoring top line, led by Grant Besse, off the scoresheet.

"At our rink we have written, 'Three players against 20 Trojans,'" Wahl said. We shut down the first line and we won."

No. 2 Benilde-St. Margaret's built leads of 1-0 and 2-1 through the first two periods on goals from sophomore right wing Chase Jungels. But Wayzata rallied to tie. Chandler Lindstrand scored the eventual game-winning goal in the second period.

The closest the Red Knights' top line got to scoring was a first-period Besse goal waved off because the whistle had blown.

"Wayzata plays tough but our top line was just off a click," Red Knight coach Ken Pauly said. "When things didn't fall their way early they began to press a little. It was a bad time to get snake bit."

The Hornets secured their seventh consecutive state tournament appearance with a 3-2 victory over the Blaze in the Class 2A, Section 2 championship game at Mariucci Arena.

The Hornets' slow start and a costly turnover led to goals from Burnsville's Tyler Sheehy. But Edina clamped down in the third period, staving off a late Blaze power-play chance.

The Blaze started well, getting a goal from Sheehy just one minute, 31 seconds into the game. He almost scored again moments later, but Edina goaltender Willie Benjamin made a pad save.

"Burnsville's got a good hockey team, and they came out and put our kids on their heels a little bit," Edina coach Curt Giles said. "But there wasn't any panic that set in. They adjusted and started to play well."

Andy Jordahl's 18th goal of the season tied the score 1-1.

With less than three minutes to go in the first period, Burnsville turned the puck over to an opportunistic Dan Hinueber. He scored his third goal of the season to give Edina a 2-1 lead.

Cullen Munson's second-period goal raised Edina's lead to 3-1. The Hornets' first and third goals were scored on passes into the slot.

In need of a spark, Burnsville received one from Sheehy. He intercepted a pass attempt by Edina's Tyler Nanne above the Hornets' circles and buried his chance at 13:35 to draw the Blaze within 3-2.

But Burnsville could not add the equalizer. Edina killed a power play with two minutes remaining in regulation.