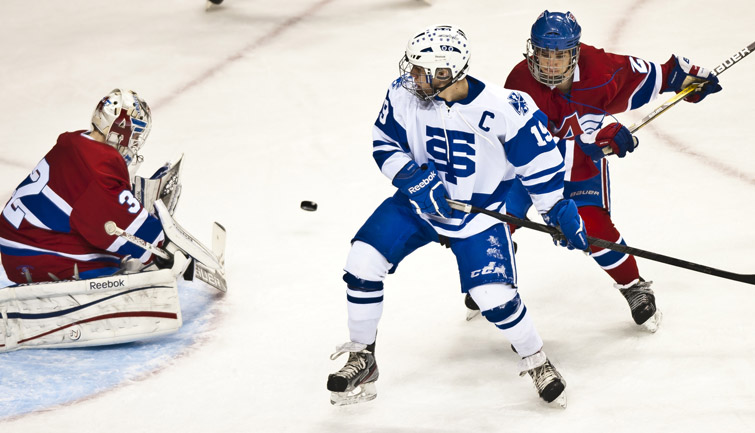 Just as the puck hit the ice Wednesday night, the St. Thomas Academy fans began to chant "This one's over… ."

They were right. St. Cloud Apollo had no chance against the two-time defending Class 1A champion, losing 12-0 in the quarterfinals at Xcel Energy Center.

Discomfort began early and repeated often for unseeded St. Could Apollo. The Cadets scored four in the first period, five in the second period, and three in a toned-down third period.

Top-seeded St. Thomas Academy respectfully acknowledged there was no need for scoring once it hit a dozen with 10 minutes left in the game. Instead, the fourth-line worked on moving the puck and passed on good shot opportunities. This nice gesture meant the Cadets would finish four goals short of the state tournament record for most goals in a game (16).

St. Thomas Academy had no intention of a statement victory in the opener of its final Class 1A tournament. Jack Dougherty reiterated the goal is to win a state title no matter what level they're at and sometimes that includes blowouts.

The Cadets' defense was just as good as its offense. St. Cloud Apollo went 33 minutes without a shot on goal and both sides of fans applauded once it finally happened.

"We know [the fans are] here to have fun, too," Cadets forward Alex Johnson said. "I think we mostly try to tune that stuff out. Obviously we don't think this one is already over cause a 0-0 game is far from over."

It was over 3-minutes, 42-seconds later when Matt Perry skated past two defenders, swept back in front of the net, and slammed the puck off the goaltender's chest for the only goal they would need.

"You never wish a team to not get a shot on goal," Dougherty said. "It's the state tournament. You want everyone to have fun and you always wish for a good game."

1. Alex Johnson, St. Thomas Academy
Where to start after this demolition? Might as well go with Johnson, a senior who was one of three Cadets’ to score twice. He also had a team-best six shots on goal and, as usual, provided the team’s pregame inspirational pep talk.

2. Jack Dougherty, St. Thomas Academy
Amzaingly, St. Cloud Apollo went just less than two periods before getting its first shot on goal. The Cadets must have been doing something right on defense, and the 6-foot-1 junior defenseman was a leader in St. Thomas Academy’s shutdown style.

3. Alec Broetzman, St. Thomas Academy
The sophomore forward scored twice and added an assist, all during the Cadets’ second-period onslaught.