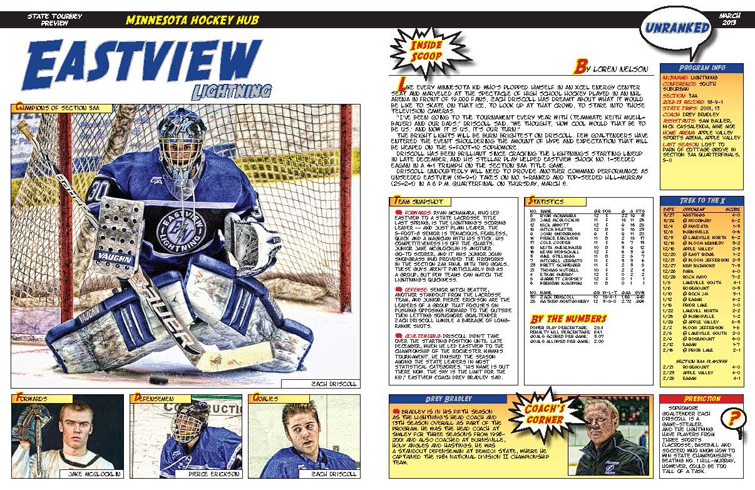 Like every Minnesota kid who's plopped himself in an Xcel Energy Center seat and marveled at the spectacle of high school hockey played in an NHL arena in front of 19,000 fans, Zach Driscoll has dreamt about what it would be like to skate on that ice, to look up at that crowd, to stare into those television cameras.

"I've been going to the tournament every year with (teammate Keith Muehlbauer) and our dads," Driscoll said. "We thought, `How cool would that be to be us.' And now it is us, it's our turn."

The bright lights will burn brightest on Driscoll. Few goaltenders have entered the event shouldering the amount of hype and expectation that will be heaped on the 5-foot-10 sophomore.

Driscoll has been brilliant since cracking the Lightning's starting lineup in late December, and his stellar play helped Eastview shock No. 1-seeded Eagan in a 4-1 triumph on the Section 3AA title game.

Driscoll undoubtedly will need to provide another command performance as unseeded Eastview (18-9-1) takes on No. 1-ranked and top-seeded Hill-Murray (25-2-1) in a 6 p.m. quarterfinal on Thursday, March 8.

FORWARDS: Ryan McNamara, who led Eastview to a state lacrosse title last spring, is the Lightning's scoring leader -- and just plain leader. The 5-foot-8 senior is tenacious, fearless, quick and a magician with his stick. His competitiveness is off the charts. Junior Jake McGlocklin is another go-to scorer, and it was junior John Snodgrass who provided the fireworks in the Section 2AA final with two goals. These guys aren't particularly big as a group, but few teams can match the Lightning's quickness.

DEFENSE: Senior Mitch Beattie, another standout from the lacrosse team, and junior Pierce Erickson are the leaders of a group that focuses on pushing opposing forward to the outside then letting sophomore goaltender Zach Driscoll handle a barrage of long-range shots.

GOALTENDING: Driscoll didn't take over the starting position until late December, when he led Eastview to the championship of the Rochester Kiwanis Tournament. He finished the season among the state leaders in most statistical categories. "His name is out there now. The sky is the limit for the kid," Eastview coach Drey Bradley said.

Bradley is in his fifth season as the Lightning's head coach and 13th season overall as part of the program. He was the head coach at Simley for three seasons from 1998-2001 and also coached at Burnsville, Holy Angels and Hastings. He was a standout defenseman at Bemidji State, where he captained the 1984 national Division II championship team.

Sophomore goaltender Zach Driscoll is a game-stealer, and the Lightning have players from three sports (lacrosse, baseball and soccer) who know how to win state championships. Beating No. 1 Hill-Murray, however, could be too tall of a task.

Class 2A, 1A Brackets 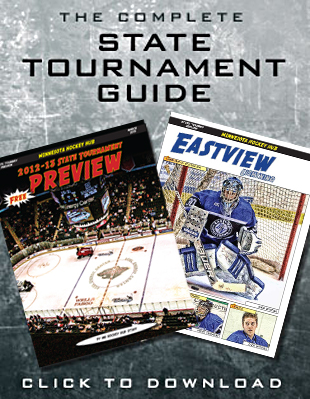