More than a goal scorer 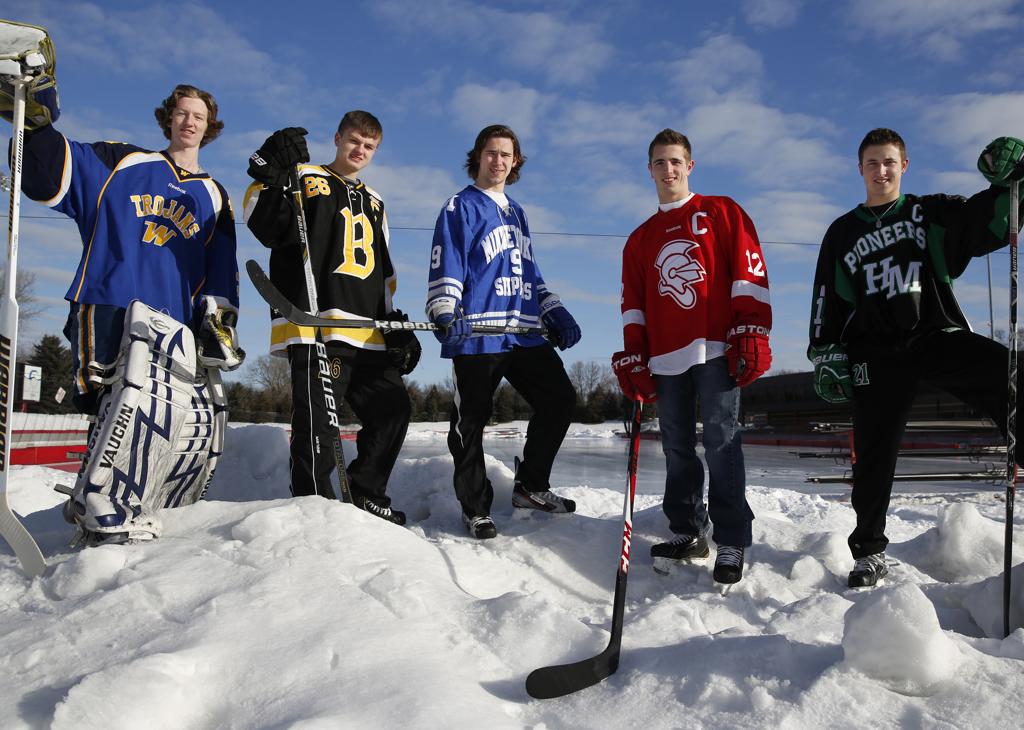 Grant Besse’s eyes, capable of finding the smallest of openings through which to shoot a puck, danced around a piece of paper containing Minnesota high school hockey records.

“Looking down the list you see a lot of great guys,” Besse said. “It kind of puts your career in perspective. It’s pretty cool to see.”

A goal-scorer throughout his four-year Red Knights varsity career, Besse improved his game as a senior in ways not so easy to chart. Coaches called upon him more often in tight situations where the aim was preventing a goal instead of scoring one. He helped kill penalties. He logged shifts on defense.

Historic scoring prowess and a more complete game made Besse the Star Tribune Metro Player of the Year.

“He reached another level this season,” Benilde-St. Margaret’s coach Ken Pauly said. “He put himself on the list of the greatest to ever play.”

Raising the bar was no easy task. As a junior, Besse scored 52 goals. The final five accounted for all of the Red Knights’ scoring in a 5-1 victory in the Class 2A championship game against Hill-Murray. No player in 68 years of tournament history scored as many goals in a title game.

Besse bucked a trend by announcing he would not leave Benilde-St. Margaret’s, a Catholic school in St. Louis Park, to pursue other hockey opportunities. Besse signed to play at Wisconsin and will join the team as a freshman this fall.

“It took a great deal of courage for him to come back and put the title back on the line,” Pauly said.

The lesson sunk in with the Red Knights’ first loss in early December, a 4-2 setback against Hill- Murray in which Besse was held off the scoresheet.

“I stayed after for a little bit talking to Coach and he said, ‘I guess if you don’t score five goals in every game this year, you’re a failure,’ ” Besse said. “I said, ‘Yeah, that’s what it’s looking like.’ I know he was being facetious, but there were expectations for me to do a lot.”

Besse played the role of catalyst, leading the team with 48 goals and six hat tricks while playing one of the state’s toughest schedules. Pauly said Besse’s “compete level” reached an all-time high. He created plays from various places on the rink and did not rely on getting the puck.

“He was really eager,” Pauly said. “He showed there are other ways to score than waiting on the back door. And he made an impact when he didn’t score.”

Besse also enjoyed rock-star status at times. A group of female Stillwater fans greeted him by writing the letters of his last name on their stomachs.

Attention came in more subtle ways. Fred Bandel, an amateur scout for the NHL’s Florida Panthers with 21 years of experience, said he watched Besse “six to eight” times this season and came away impressed.

“There’s no question he’s made progressions in his game,” said Bandel, adding that the shot that made Besse one of the state’s best goal-scorers is already ahead of the curve.

“He’s got a NHL-caliber shot,” Bandel said. “It’s not only the speed and quickness, it’s how he hides the release point. It’s very tough for goalies to react. You can’t teach that.”

Besse failed to score a goal in the final game of his decorated career as Benilde-St. Margaret’s lost 5-2 to Wayzata in last week’s Section 6 final. But he doesn’t think a single performance, whether he scored five goals or zero, should define the journey.

“I’d say we were very successful,” Besse said. “We didn’t reach our ultimate goal of getting back to the state tournament and trying to repeat as champions, but we got to that 20-win mark. We beat Shattuck-St. Mary’s. As much as losing to Wayzata at Mariucci Arena was tough, having a shot at getting back to state was a success.”