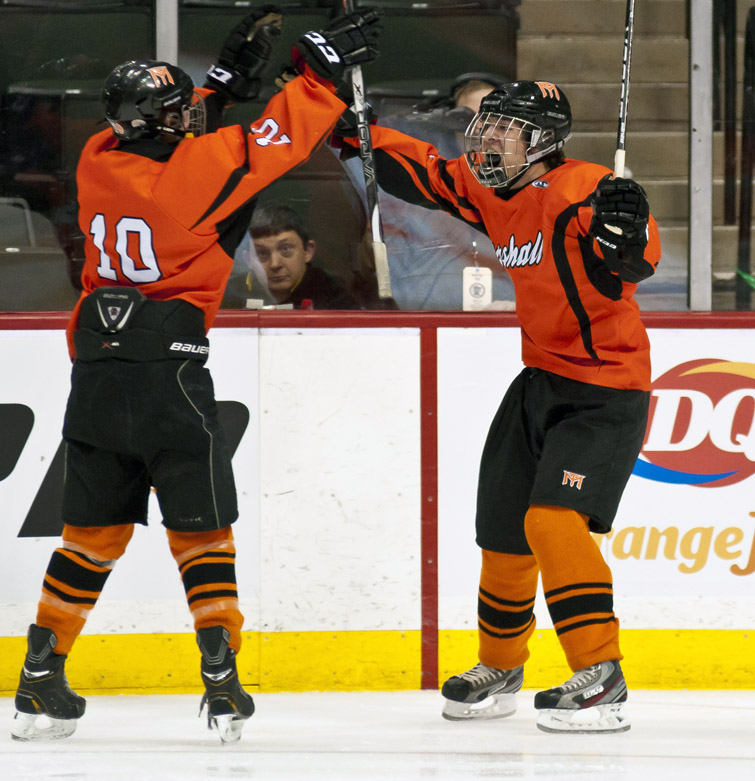 Marshall's Jeremiah Barker, right, makes himself heard after scoring his first goal of the season in Wednesday's Class 1A quarterfinals against Breck. Photo by Tim Kolehmainen

The body language told the story. All slumped shoulders and somber faces.

Voices were in hushed tones.

Breck’s postgame media session was not a joyous affair.

Marshall’s mood, meanwhile, was decidedly upbeat. There were smiles and kudos all around.

Fun was the operative word.

For a second or two, deep inside the concrete caverns of the Xcel Energy Center in St. Paul, it was hard to discern the winners from the losers.

Maybe there were no losers.

“It’s great that Marshall got to go for the first time ever,” goalie Mason Campion said after his Tigers lost 6-1 to the No. 2-ranked Mustangs on Wednesday in the quarterfinals of the state Class 1A tournament. “It’s fun to be a part of this team. We just lost but I don’t care, it’s fun to be out there.

“It’s something you dream about whenever you start in mites and squirts and all the way, you just want to play at the Xcel Energy Center, and we’re here.”

There has been much consternation in recent years about the quality of hockey coming out of southwestern Minnesota. The Section 3A representative in recent years has served as nothing more as piñata at the state’s biggest hockey party.

The prevailing hue and cry has been to blow up the section and infuse it with more competitive teams from the east, from the north, from Saskatchewan if necessary.

The problem with all that is the problem isn’t Marshall. 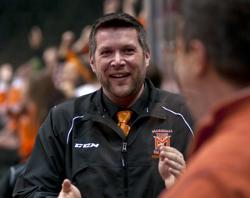 It wasn’t on Wednesday. The Tigers (17-11-1) were overwhelmed by the Mustangs (28-3-1) early, but everything changed when Marshall got an unlikely goal from a most unlikely player in the second period. Lightly used junior Jeremiah Barker’s deflection 3 minutes, 13 seconds into the second – the first varsity goal of his career -- served as a massive adrenalin boost for the Tigers.

“Well I didn’t realize it had gone in,” Barker said. “I just saw a flash of it, I honestly couldn’t believe it, ‘Wow I just scored a goal.’

“I got a lot of energy, I got real excited and all that, it was a great experience. So I was glad my parents were here and able to see that. I’m sure that was special for them, too.”

Breck, which has made five straight state tournament appearances and has won two titles in that span, led 4-1 going into the third and didn’t get its final goal until there were 13 seconds left.

This was no ordinary kick-sand-on-Section 3A victory. The Mustangs are used to winning these quarterfinal matchups more handily. They looked shocked when Barker scored his goal. More shocked than Barker, even.

“This is our fifth year here, and in the past that section has been weak, weaker than the others,” Breck coach Les Larson said. “It wasn’t today. I feel like those guys were a very, very competitive team.”

“We’re still in the infancy stage when it comes to Minnesota years,” Coudert said. 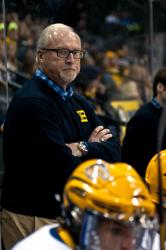 Hockey will only get better in the southwestern part of the state. Kids in Marshall already are talking about working twice as hard on their games, Coudert said, so they can skate at the X and be on TV. Marshall’s biggest rival, Luverne, is another program on the rise.

No, the problem isn’t Marshall or Luverne or New Ulm. There are only a select few small-school teams in the state that match up with Breck year after year. Shoot, the Mustangs beat Duluth East this season. Duluth East is one of the favorites to win the state Class 2A title.

Two-time defending St. Thomas Academy beat Breck by one goal in two games this season. The Cadets are moving up to Class 2A after next season. Hermantown has been a Class 1A heavyweight for years, and has appeared in each of the last three championship games. Longtime coach Bruce Plante says its not unthinkable that the Hawks might someday make the jump to Class 2A as well.

“It’s not my decision,” Larson said. “I’m going to do whatever the school thinks.”

Larson is not convinced the Mustangs are ready for the jump.

“We have 145 boys,” Larson said. “We had less than 30 skaters try out for both teams this year. We’re not Shattuck. We have a very supportive administration, but we’re not a hockey school. We want to continue to be a great program, but I think we are Class A.

“I think that could change, but I think for right now we are Class A.”

The talent level in Class 1A will drop without St. Thomas Academy. The quality of opening-round matchups will likely improve. The same if Breck and Hermantown departed for the big-school playoffs.

Les Larson says the Mustangs field a state championship-caliber team each year thanks largely to “smoke and mirrors.” Don’t let him fool you. He’s built a program that can win over the long haul. Two of the Mustangs’ best players Wednesday were Chase Ellingson and David Husband, a freshman and sophomore.

The best talent should be in the biggest tournament. Let more Marshalls have their moment in the spotlight. The games will be more competitive in Class 1A, and the Class 2A section playoffs get ramped up, too.