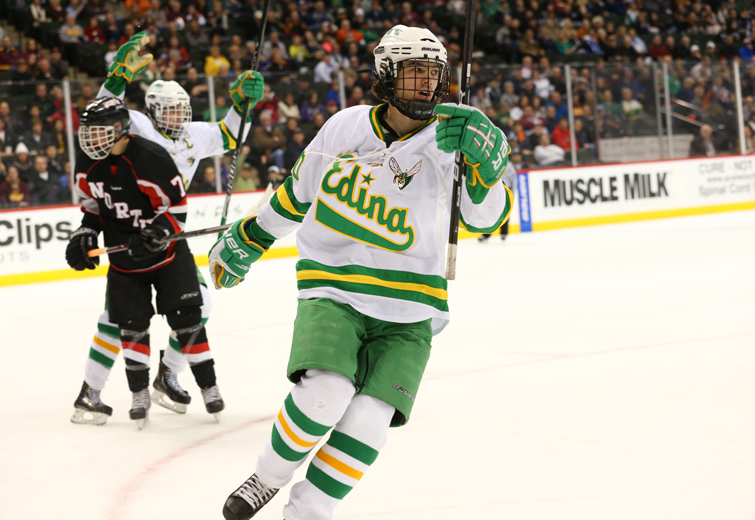 Dylan Malmquist (16) celebrates one of his two goals in Edina's 9-3 victory over Lakeville North in the Class 2A quarterfinals. Photo by Brian Nelson

Lakeville North aspires to do what Edina did to it Thursday at Xcel Energy Center.

The Panthers watched in awe as the Hornets scored five goals second period and got a hat trick from Connor Hurley’s in a 9-3 Class 2A quarterfinal victory.

“What can you say, it’s great to hear, ” Hurley said about the Hornets being called role models. “We came out really fast [in the second period] and were chipping the puck behind [the defense] and using our legs to get behind them and making plays.”

Lakeville North stayed close to the No. 3 seed for a bit, ending the first period behind 2-1. But the Hornets returned inspired and the Panthers’ first-hand lesson commenced.

A pair of redirections by Bo Brauer and Dylan Malmquist (two goals, one assist) gave the Hornets a 4-1 lead. Hurley, using his speed and awareness, added goals two and three within 27 seconds of each other. The junior forward also had one assist.

Lakeville North’s Nick Poehling also had a hat trick, getting No. 3 in the game’s final minutes.

“My hope is that … for our young guys, which we have a bunch on the team, to see the way they prepared and the way they competed,” Lakeville North coach Trent Eigner said.  “We understood the repercussions of playing soft or making mistakes. Unfortunately that little stretch in the second period really took the wind out of our sails.”

The Panthers (11-16-1) struggled against ranked opponents this year. In 15 tries, they won one and tied one. It was their third state appearance in the last four years.

“I don’t think we looked at them any different,” Edina’s Parker Reno said. “They were in the state tournament, so they’re a good team.”

1. Connor Hurley, Edina Hurley had his "Grant Besse" moment to begin the Class 2A tournament for the Hornets, scoring a hat trick and adding an assist. The swift and shifty Hornets' junior showed his versatility on the three goals. He opened the scoring with a long wrister just 2:53 into the game then scored 27 seconds apart midway through the second to blow the game open. His second goal came on a one-timer from Andy Jordahl, then he capped the hat trick with a length-of-the-ice rush.

2. Nick Poehling, Lakeville North
In a 9-3 loss, Poehling drew plenty of attention by scoring all three of the Panthers' goals. The sophomore came into the game with a total of six on the season.

3. Dylan Malmquist, Edina
The entire top line for the Hornets -- Hurley, Malmquist and Jordahl -- dominated the game for long stretches. Malmquist finished with two goals and an assist, including a great redirection of a Matt Nelson shot that opened up a 4-1 lead in the second period.