No. 1 Hill-Murray overpowers Eastview on its way to Class 2A semifinals 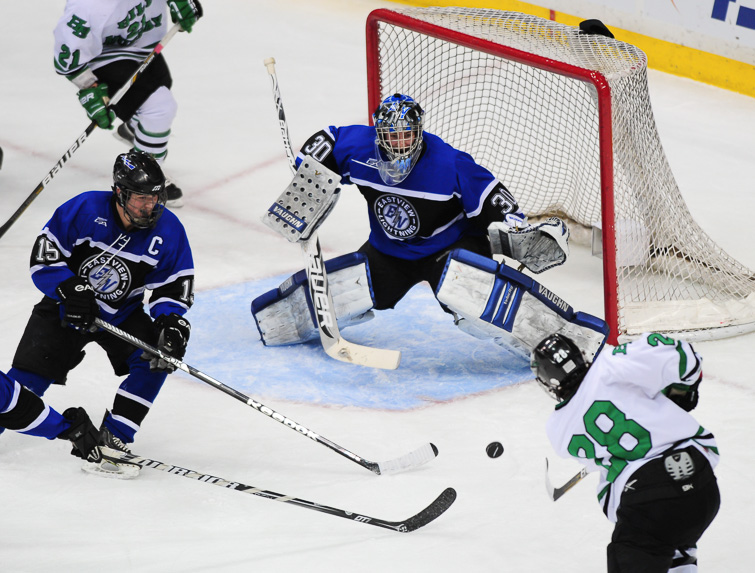 Mitch Slattery (28) fires in Hill-Murray's fifth goal during the second period of the Class 2A quarterfinals against Eastview. Photo by Adam Crane.

Top-ranked and No. 1 state tournament seed Hill-Murray barred the door but Eastivew kept sneaking in windows throughout the Pioneers’ 6-3 quarterfinal victory Thursday.

The game seemed headed for a lopsided result. Hill-Murray led 2-0 after the first period on goals from seniors CJ LaChappelle and Zach LaValle.

Those goals overshadowed a tremendous glove save by Lightning goaltender Zachary Driscoll.

Hill-Murray led 3-0 after Colten Greeder went hard to the Eastview net and buried a pass from Zach Mills just one minute and 40 seconds into the period. LaValle added his second goal less than one minute later.

With his team ahead 4-0, Lechner started loosening the rotation and giving more players ice time. Meanwhile, Eastview captain Mitch Beattie reminded teammates to turn their focus away from the scoreboard and look into their hearts.

Then the Lightning struck. Twice. Goals from Keith Muehlbauer and Mitchell Cerrato cut the Hill-Murray lead in half at 4-2.

Eastview got one final charge as Brett Schweiger scored at 7:20 of the third period to make it 5-3. Lechner joked the two-goal lead caused him “to lose more hair.” LaValle said players did not panic.

Hill-Murray took control with Sam Becker’s goal from the blue line at 11:01 of the final period. 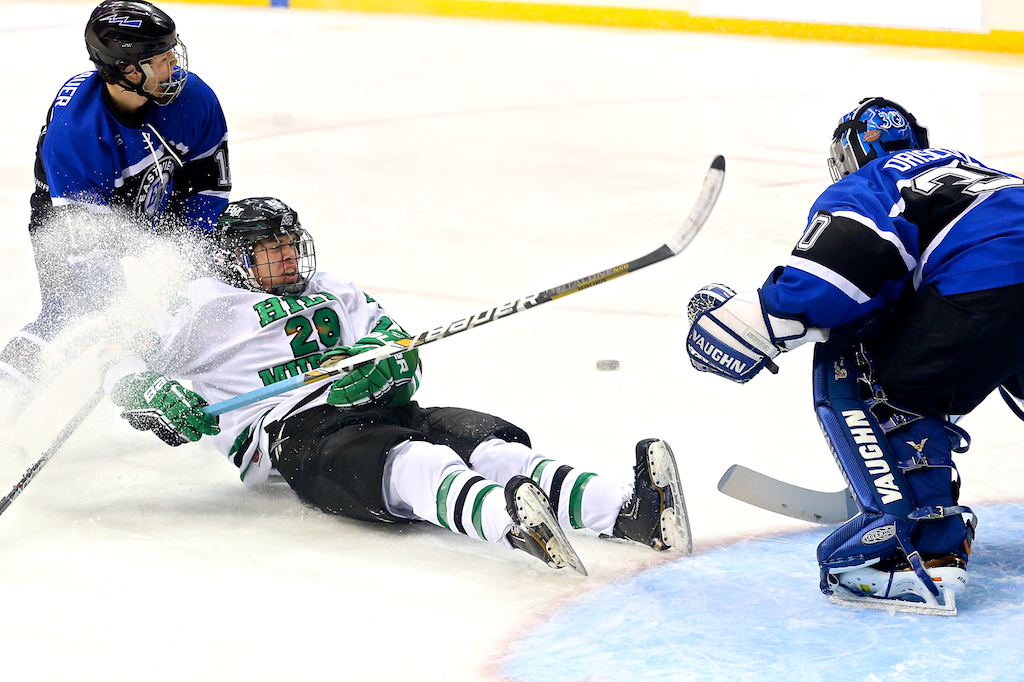 1. Zach LaValle, Hill-Murray
Is this guy still playing high school hockey? LaValle seems like he has been starring for the Pioneers forever, but really it has only been five years. The senior captain, always at his best on the state tournament stage, scored twice and set up another goal.

2. Sam Becker, Hill-Murray
The Pioneers’ defensemen are a veteran group and underrated in their ability to block shots, clear pucks and do all the dirty work that doesn’t show up in the statistics. Becker is a leader of that group, and his skating ability and smarts keys to limiting Eastview to 18 shots. Becker, former forward converted to defense, scored an unassisted goal in the third period to put the game out of reach.

3. Mitch Slattery, Hill-Murray
The slippery moves, the laser passes the creative goal celebrations, all of Slattery let loose with all of his best material. He finished with a goal and two assists, teaming with LaValle to form a deadly combination.