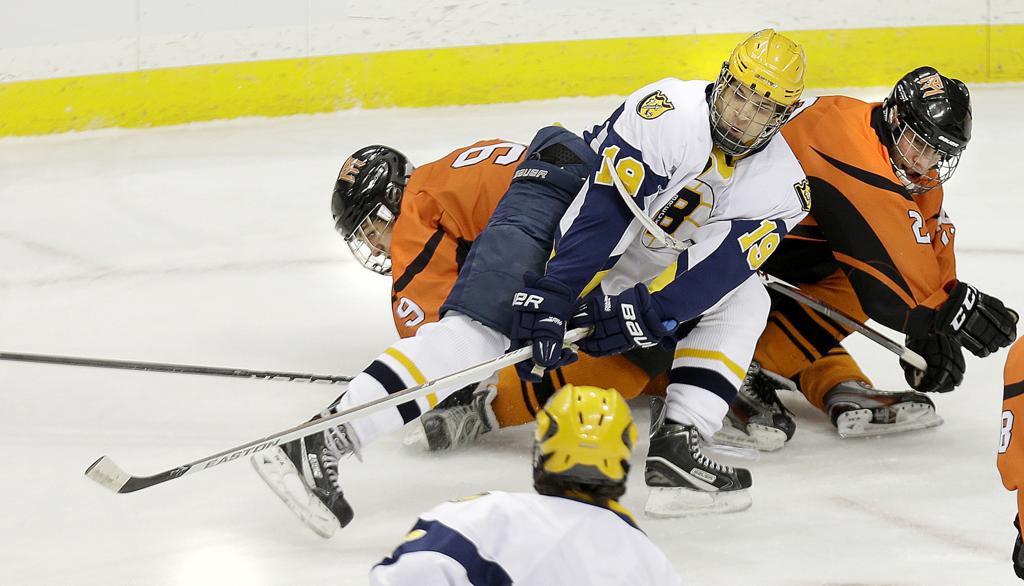 Breck's Mark Sharp battled for possession with Marshall's Jeremiah Barker, left, and Adam McVey during the first period of their Class 1A quarterfinal at the Xcel Energy Center in St. Paul. Star Tribune photo

Jeremiah Barker hesitated at the mic. Not one to get many chances to score, he sheepishly admitted that his best opportunities had been on open nets, which he missed.

None of that matters now. The junior Marshall left wing, who plays on his team’s third line, scored his first career goal Wednesday and put his name in school history by scoring the southwestern Minnesota school’s first state tournament goal ever at Xcel Energy Center.

On a team with leading scorers Corey Clark and Quinn Horvath, the distinction will be forever Barker’s. At the postgame news conference, he stood out from his four more tradition-minded teammates by sporting a beanie over his long hair.

A chain necklace peeked through an undershirt, and the lower half of his legs were exposed down to his white ­sneakers.

The Tigers needed an unconventional opportunity to score in the second period against Breck, Class 1A’s No. 2-seeded and -ranked team. The Mustangs planned for a shutout and won easily 6-1.

“I didn’t realize it had gone in. I just saw a flash of it,” Barker said. “I honestly couldn’t believe it.”

Baker knows it’s not his role to score. He and the third line are meant to be a brief physical buffer while the first two lines reload. But when he got a chance in front of the goal, he made it count, even with a goaltender in the net.

Racing along the wings of ice and grass are much the same for Breck’s speedy senior Jack O’Connor. In fact, he prefers a field over ice.
O’Connor will give up his hockey stick after this week and focus on improving his efforts with a lacrosse stick. Next year he will play college lacrosse at Union University (N.Y.).
“I like it a little more,” he said about lacrosse. “They’re pretty similar with the stick handling, all the scoring, the running and the aggressiveness.”
O’Connor, who wore a Minnesota Elite Lacrosse cap after his team’s 6-1 quarterfinal victory over Marshall, will break a family tradition of playing college hockey that began with his grandfather Bob. The eldest O’Connor played at Providence, and his son Mike (Jack’s dad), played at Vermont.
Bob O’Connor is a former coach in chief of USA Hockey and coached several national teams. Mike O’Connor played for Edina, which never won a state championship in his career.
“They were ranked No. 1 all year and then choked,” Jack O’Connor said. “Now he wants me to win it as the last thing I do.”
Staying out of trouble, kind of
Hermantown coach Bruce Plante tried to tone down his colorful comments after the Hawks’ 3-0 victory over Marshall School of Duluth.
An improved filter still managed to let through a poke at Duluth Marshall, a mention about his seniors’ checking out University of Minnesota “chicks,” and the Hermantown community bringing Mardi Gras to St. Paul.
“Usually I get myself in trouble when I’m [at the state tournament],” he said before reciting, “[Marshall School coach Brendan Flaherty] owns half the town. You know how those ­Marshall people are.”
Senior Chris Benson threw his head back and laughed. The Hermantown players live for their coach’s one-liners. Tuesday night’s team banquet was full of them and kept the Hawks loose heading into the state tournament.
“He spiced it up a little bit,” Benson said about the banquet. “I love [his rants]. It’s like, bam!”
Naming rights
East Grand Forks hopes two of its players can perform like the men they’re named after. Junior defender Eddie Eades is named after Hockey Hall of Famer Eddie Belfour. And sophomore center Dixon Bowen is named after former NHL player and University of North Dakota alum Dixon Ward.

150
Miles Hermantown and Marshall School traveled to play each other in the quarterfinals.

12
Goals scored by St. Thomas Academy in the opener of its final Class 1A tournament

Adam Smith, Hermantown: Goaltender collected third shutout during the playoffs, now 16-0-1 since taking over the job.

Thomas Lindstrom, Breck: Scored an unassisted goal and assisted on one. Has 34 goals, 25 assists on the season.

QUOTE OF THE DAY
“It just happened. It wasn’t comfortable for either team.”
- St. Thomas Academy coach Greg Vannelli