Battle-tested Greyhounds know what it takes to manage, close out games 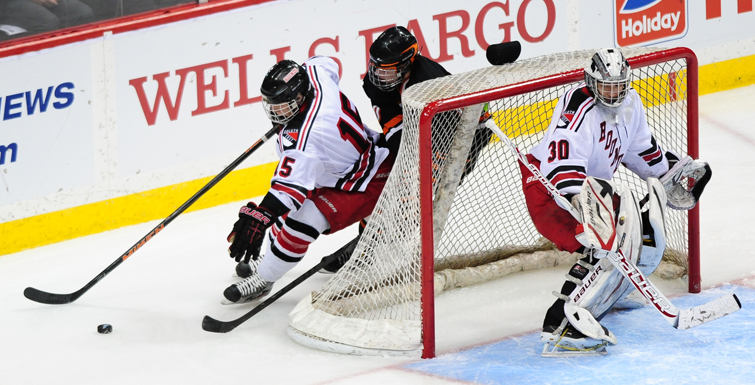 Meirs Moore (15) wheels around the net while goaltender Dylan Parker looks on. The pair have been big reasons the 'Hounds are in the Class 2A semifinals Friday against Edina. Photo by Adam Crane.

Meirs Moore knows a thing or two about playing in the state tournament, and he was sure to use the knowledge he’s gained in his previous two trips to St. Paul to his advantage when his third Class 2A tournament kicked off on Thursday.

Moore skated slowly to the blue line during introductions so he didn’t risk catching an edge and taking a tumble. He didn’t let his emotions get the best of him during the close game and stayed calm.

Most importantly, Moore brought four sticks to the rink, just in case one broke or he didn’t like the feel of a twig or two.

As it turns out, he needed all of them.

Moore, who spends most of his time on the ice either with the puck or within a stick's-length of it, snapped three sticks on Thursday afternoon against Moorhead.

He’ll have to spend Thursday night making a trip to the nearest hockey shop to invest in a few more.

“Two of them were brand new, so I’ll have to call the guy up and see if there’s a little default in the blade,” joked Moore after the game. “We’ll get more, though, so that shouldn’t be an issue.” 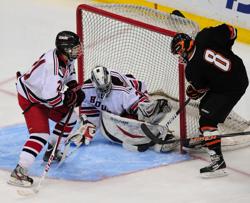 Dylan Parker makes the save on Moorhead's Aaron Herdt (8) late in Duluth East's 1-0 victory in the Class 2A quarterfinals. Photo by Adam Crane.

Duluth East hopes it won’t be, as Moore is the Greyhounds’ catalyst from the backend. He played his role well against Moorhead, even though he didn’t notch a point, by putting pucks towards the net, poking pucks away from Moorhead forwards and by making clean, crisp passes.

Three sticks broke, but Moore’s game never did, and that rubbed off on his teammates.

With the Hounds clinging to a 1-0 lead late in the game as Moorhead pushed frantically for the tying tally, Duluth East bent, but never broke.

“We’ve been in a lot of games like this, and it was great to see the kids react to this kind of game,” said coach Mike Randolph, who challenged his team to focus on the defensive side of the game midway through the year. “We’re not a high-scoring team, so we wanted to emphasize and sell the fact that we need to play defense first and limit chances.”

The mentality of this Duluth East team – a group that isn’t as talented as Hounds teams in the past – has made them more prone to down-to-the-wire affairs, but it’s also given them a better chance to pull it out in tight games, something they weren’t able to do last season.

“We might have had two goals and lost [last year],” said senior forward Ryan Lundgren of the more offensive-minded Duluth East team that lost in the Class 2A quarterfinals a year ago. “But this year we’ve been in so many of these games, so many one-goal games. That’s what our team is good at this year.”

The play of the defensemen and goalie Dylan Parker is the main reason for the successes in those nail biters.

Moore – when he has a functioning stick – along with Phil Beaulieu, Andrew Kerr and Alex Trapp make the smarter plays to stop a goal rather than the riskier ones.

Goalie Dylan Parker, who has turned his game up lately, makes sure to keep things in perspective when he’s in the crease with a one- or two-goal lead late in games.

“I think a big part is the schedule we played this season,” said Moore. “That’s really where we come together. It’s a whole team effort where everyone contributes.”

In the end, experience always helps bolster a team’s confidence when the chips are down. Last year, Duluth East didn’t have the experience of coming from behind or clinging to late leads, at least not on the level of this year’s squad.

Maybe that will be the difference when it’s all said and done.

“Nobody gave us a chance to be here, or in the section final, but they’ve proved a lot of people wrong,” Randolph said. “We’ve been down to a lot of teams, and these guys find a way to stick with it, and believe in themselves, and get it done.”