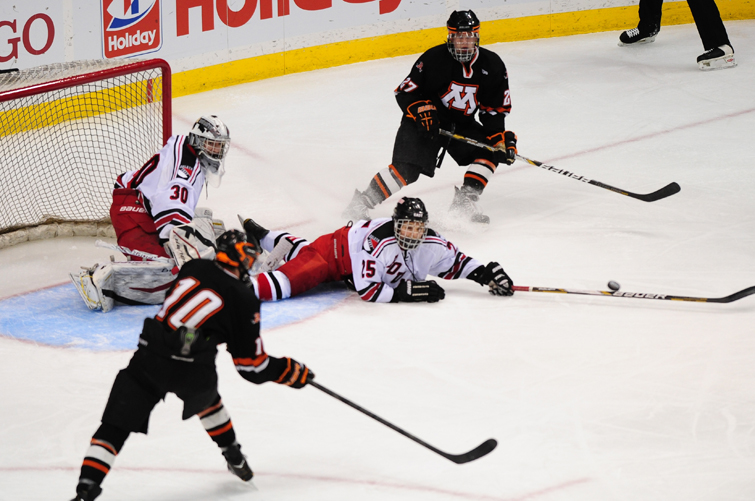 That's all Aaron Herdt and Moorhead wanted. One more second might have been all they needed. With that additional tick of the clock, the Spuds' Class 2A state quarterfinal against second-seeded Duluth East might still be going on. And on. And on.

But as the Rolling Stones so famously crowed, you can't always get what you want.

When the final horn sounded on East's 1-0 victory over Moorhead Thursday afternoon, March 7 at the Xcel Energy Center, Herdt was a split-second away from potentially tying the score. The junior forward was in full wind-up on a one-timer from the right face off dot. Instead, the pass from teammate Thomas Carey sat untouched, perched upon an imaginary tee.

Herdt bent at the waist, exhausted and dejected. Unable to move. Unable to unleash his wicked shot.

"I wish we had one more second on the clock," Herdt said. "Who knows, we might still be playing."

"You always have that sense that -- and I feel young enough at heart to believe -- that you always believe you're going to get (a goal)," Moorhead coach Pete Cullen said. "You're always thinking, here it comes, here it comes." 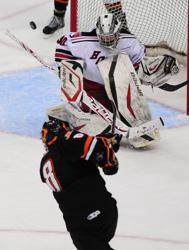 Moorhead spent much of the game bottled up by a stingy Duluth East defense. Through two periods, the Spud had just five shots on goal.

Their chances of winning looked bleak when senior forward Nick Uglem went down with a knee injury midway through the second. Without one of his top forwards, Cullen juggled his lines to try and generate some offense. He moved Herdt up to play with seniors Thomas Carey and Tony Uglem -- a top-heavy scoring combination.

"It just hurts a lot not to have the 1-2 punch. We just had the one big punch," Cullen said, describing Nick Uglem's loss as a shot to the heart. "We're trying to scramble to see what line we can put together for some magic."

Cullen rode the top line hard in the third period, playing them every other shift. At one point, the trio had a four-minute shift that carried through an entire power play, with a Spuds' time out mixed in.

"Once it ends, you really feel the fatigue. It really sets in," Carey said. "But in the moment, you don't feel it."

As exhausted as they were, Carey, Uglem and Herdt still managed to put late pressure on the 'Hounds. With 12 seconds left and an extra attacker on the ice, Herdt fired away from the right face off dot, but the puck was deflected over the net. Thirteen seconds later, he was set to do the same.

"Your heart kind of sinks, but then you get the puck again and think, 'this is the magic one,' " Cullen said of the final seconds.

Moorhead sophomore goaltender Jacob Dittmer knew he had a lot to live up to.

There’s pressure that comes naturally from being in such a high-profile role in one of Minnesota’s most storied hockey programs. But there’s also the pressure of following up one of the best goalies in program history.

That’s exactly what Dittmer did when he replaced Michael Bitzer as the starting goalie in Moorhead following the graduation of Bitzer last spring.

By all accounts, Dittmer’s first audition in front of the state tournament crowd at Xcel Energy Center went better than expected.

“Obviously it’s the state tournament, so I had to get up for that,” said the soft-spoken Dittmer after making 29 stops in a 1-0 loss to No. 2-seed Duluth East. “It was a lot of pressure, and I obviously didn’t want to let the city of Moorhead down. I wanted to step up and be the big man this year.”

Coach Pete Cullen wasn’t as mild in his response to the effort.

“Are you kidding me?” the first-year coach said. “That was probably his best game all year.”

Many of his saves came in spectacular fashion.

At one point, with the Greyhounds up 1-0, Dittmer made a glove save that gave the Spuds a chance to knot the score late. Duluth East’s Tyler Sworsky grabbed a rebound in the slot, made a pretty little toe drag to get it to his forehand and tried to slide on past Dittmer.

Dittmer wasn’t having any of that, though.

Saves like the one Dittmer pulled off had people in the building reminiscing about the stops made by Bitzer over the years, and specifically last season, when he nearly backstopped the Spuds into the Class 2A title game with some of the best play between the pipes that the tournament has ever seen.

Bitzer thought he could pass some the knowledge he gained on the big stage down to Dittmer and has talked to the young goalie periodically throughout the season after skating with him over the summer.

“He’s been there for me if I have a question or anything,” Dittmer said. “His little tips in the net have been key there.”

Edina put on a clinic on how to perform under the bright lights of the Xcel Energy Center on Thursday afternoon.

With the pressure on in a one-goal game early in the second period, the Hornets started buzzing and the Panther had no answer.

“We understood it very well that if we’re going to make mistakes, miss checks, that’s the type of team that can hurt you in a hurry and it happened in the second,” said Lakeville North coach Trent Eigner.

Eigner’s hope, along with the rest of the Lakeville North players that will return to the lineup next season, is that the 9-3 beat down they suffered on Thursday serves as more of a building block to future success.

Generally, teams have to take their lumps and pay their dues before they can escalate themselves to the level of the Edina’s of the world.

That’s what the Panthers are aiming for – they want to be on Edina’s mountain, not one of the foothills surrounding it.

“My hope is that the young guys, which we have a bunch on this team, see the way [Edina] prepared and the way they competed,” Eigner said. “Like I said earlier, we understand the repercussions for playing soft or making mistakes. I think our kids can take something away from it. They know these kids [from Edina] away from the rink, the year round training and the commitment to the game.

“It’s definitely a learning experience for us.”