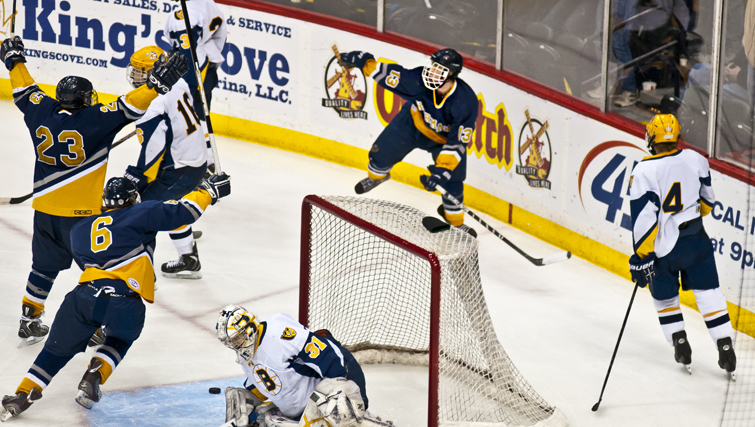 Zach Kramer (13) celebrates his game-winner in the second overtime as Hermantown defeated Breck, 4-3 to advance to the Class 1A title game for the fourth straight year. Photo by Tim Kolehmainen.

Hermantown junior Zach Kramer picked up a loose puck from teammate Bo Gronseth and completed the breakaway with a goal to give his team a 4-3 double-overtime victory against Breck in Friday’s Class 1A semifinal at Xcel Energy Center in St. Paul.

“Both defenders fell down and I picked the puck up,” Kramer said. “That’s probably the fastest I’ve ever moved my skates. It was pretty important to be faster than the breakaway and get over there.”

Hawks coach Bruce Plante proclaimed it the most important move of his hockey career. Kramer agreed nothing else has compared.

Hermantown was fresh off a missed penalty shot, the first of this year’s state tournament. Lane LeGarde missed wide left.

The Hawks quickly shook off the miss. “Anything positive is a good thing in overtime,” Plante said. “So I don’t think that hurt us.”

Regulation’s final minute also provided each team game-winning opportunities. Hermantown’s Jake Zeleznikar and Chris Benson had clear shots. On the other end of the ice, Breck’s Mark Sharp got one off, but both goaltenders held strong to force extra time.

Body-sacrificing defense helped keep things close. The Hawks’ Joe Muehlbauer and Neal Pionk laid out in front of several of Breck’s shots. The Mustangs’ Derek Wiitala, on his knees in front of the goal, took a puck off his chest to prevent a score.

“I thought [the saved penalty shot] was going to give us a boost,” Breck’s Matt Colford said. “We worked really hard the whole game and just didn’t get the last bounce.”

Hermantown, three-time runner-ups in the state finals, will get another shot Saturday against St. Thomas Academy. The Cadets have inflicted the Hawks’ last two title game defeats.

1. Zach Kramer, Hermantown
Kramer earned instant rock star status in Hermantown Friday afternoon, scoring the game-winner at 2:26 of the second overtime against Breck -- sending the Hawks to the Class 1A state championship game for the fourth straight year.

2. Travis Koepke, Hermantown
Koepke tallied two goals in the third period, both times tying the score after Breck had gained a one-goal lead. As it has all season, the Hawks' top line of Koepke, Chris Benson and Bo Gronseth factored in all three of the regulation goals.

3. Matt Colford, Breck
One of the senior leaders for the Mustangs, Colford finished with a goal and two assists. His goal at 8:57 of the third period gave Breck its final lead. Colford also finshed at plus-2 and had a team-best five shots on goal.