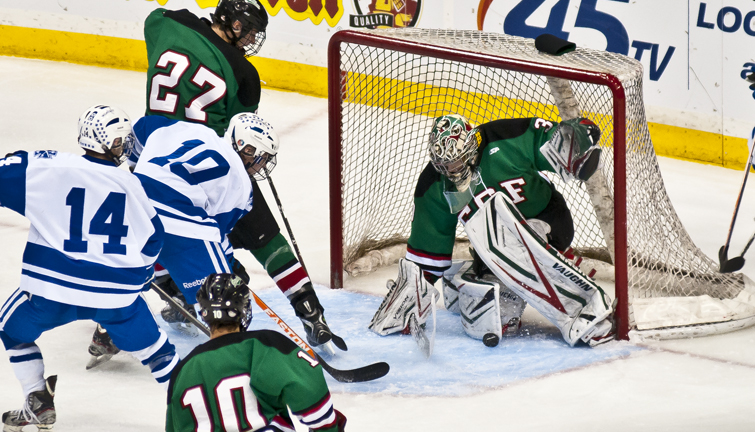 East Grand Forks' Josh Weber (30) gets his leg across to stop the shot by Peter Tufto (10) of St. Thomas Academy. Photo by Tim Kolehmainen.

Long before St. Thomas Academy exploded for a 11-0 victory against East Grand Forks in Friday’s Class 1A semifinal, the teams were locked in a tight first period battle in which neither team’s coach felt comfortable.

Cadets’ co-head coach Greg Vannelli said his team and East Grand Forks were propelled by adrenaline and were “dead even” in terms of skating. Green Wave head coach Tyler Palmiscno wasn’t so sure.

“We were under pressure,” Palmiscno said. “I don’t know if anything was really working well for us but the longer the game stayed close, the better chance we had.”

St. Thomas Academy’s talented sophomore Tommy Novak dashed the Green Wave’s dreams by giving the Cadets a 2-0 lead with one minute and 22 seconds remaining in the first period.

Said Palmiscno: “It wasn’t good to give up a goal there and we weren’t ready when the puck was dropped in the second period.”

St. Thomas Academy, widely considered the state’s best team regardless of class, crushed the Green Wave with six goals in the second period. Matt Perry and Schmidt each scored twice, with Schmidt adding two more goals in the third period.

“We didn’t expect that but they’re good and we weren’t,” Palmiscno said. Asked if a disparity in talent or a sense of intimidation doomed his team, Palmiscno replied, “All of the above.”

The St. Thomas Academy victory sets up a third consecutive championship game meeting with Hermantown. The puck drops at noon on Saturday.

“We’ve been preparing all year for this game,” Regan said. “We’re ready to go.”

1. Wyatt Schmidt, St. Thomas Academy
The Cadets' defenseman more than equaled his season goal output in one massive game, scoring four times in another big playoff romp for the Cadets. Schmidt entered the game with just three goals but poked in two in each of the last two periods. He also was a key part of the Cadets' defense, which extended its 2013 state tournament shutout streak to 102 minutes. Schmidt was an amazing plus-8.

2. Matt Perry, St. Thomas Academy
More of a rugged power forward than a goal-scorer, Perry had a role reversal of sorts, scoring two goals and adding three assists. The Cadets outscored the Green Wave 6-0 when Perry was on the ice, .

3. Tom Novak, St. Thomas Academy
Novak is worth the price of admission alone, as the sophomore's hands compare with the best in the state. His weaving, deking rushes up ice were something to behold. Nearly impossible to contain, Novak finished with just one goal, but his impact was much bigger.