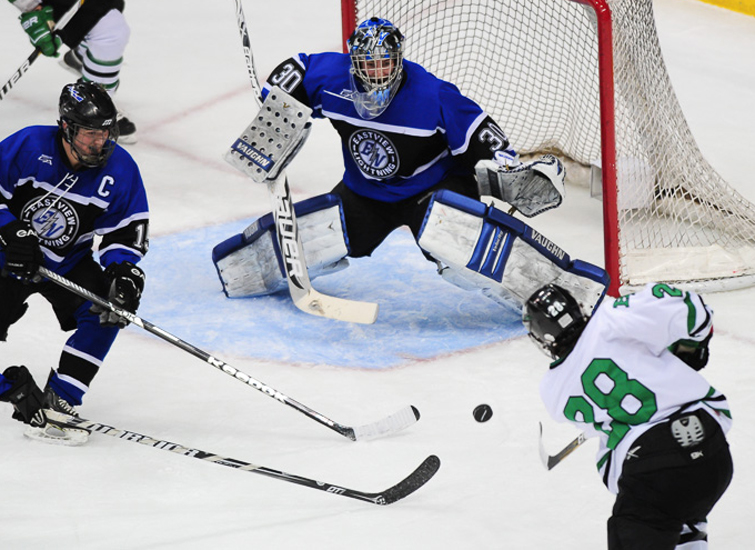 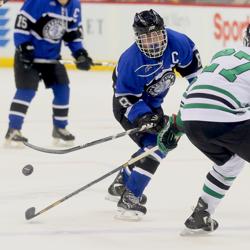 When Eastview players filed out of the visiting team tunnel and onto the ice at Xcel Energy Center in St. Paul, the NHL arena had an overwhelming impact.

As it does with most newbies to the big dance, the first state tournament appearance for this edition of the Lightning took a little getting used to.

While Hill-Murray – a perennial tournament participant – was busy building a two-goal lead in the first 11 minutes of action, Eastview was busy finding its legs and its game.

“To get past the first 5-to-7 minutes and still be even would have been nice,” Lightning coach Drey Bradley said. “But that didn’t quite happen. We wanted to just go out there and give a good effort and look at the scoreboard halfway through and have a tight game.”

As it turns out, that’s exactly what Eastview had.

Sure, the Pioneers built a 4-0 lead before the three-minute mark of the second, but the Lightning battled back.

Twice the Lightning pulled to within a pair of goals – to make it 4-2 and 5-3 – thanks largely to the vast leadership up and down the Lightning roster.

“Seeing 4-0 is always difficult, and the problem is, as a captain and a leader, you have to try and keep everyone’s heads up,” said Mitch Cerrato. “Coach said, ‘Don’t look at the scoreboard’ so we could try and motivate ourselves to get back in the game.”

The Lightning boasts a roster full of players with state tournament experience in other sports, including a few state titles in lacrosse, baseball and soccer.

They used that big-game knowledge from the fields to carry them back on the ice.

“We definitely felt like we’d been ready for it,” said Ryan McNamara, who has led the Eastview lacrosse team to a state championship. “We thought we could do it. After we finally started coming back and scoring, it’s still tough to come back on a good team like Hill-Murray.”

In the end, too much skill and firepower proved to be the difference for the Pioneers. But Eastview is confident that it will be back. 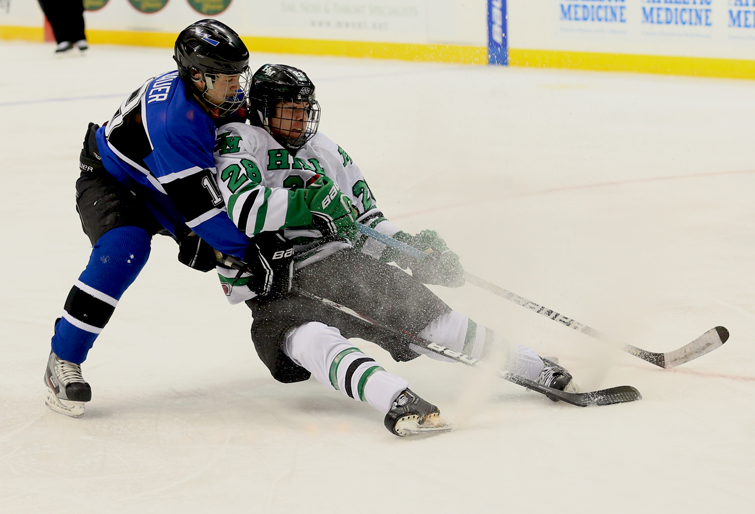 Mitch Slattery (28) and Joey Anderson have given the Pioneers' offense a spark in their first seasons in green and black. Photo by Brian Nelson.

It is only natural to wonder how much better No. 1-ranked Hill-Murray would be if would be seniors Jake Guentzel and Blake Heinrich decided not to depart early.

Guentzel was a machine at producing points. As pure as they come.

Heinrich was a wrecking ball on defense, who could set the tone of a game with bone-crushing hits.

The Pioneers did not dwell on the early departures from two of its stars. Instead, they embraced the additions of two new faces, players who made an immediate impact.

Junior Mitch Slattery transferred to Hill-Murray from Shattuck-St. Mary’s and through the regular season, section playoffs and one state tournament game has recorded 26 goals and 37 assists.

In his state tournament debut Slattery was his usual self, scoring a goal and chipping in with two assists

“I was ready to go,” he said. “Don’t want to do anything embarrassing.”

He even displayed a goal celebration he titled “Statue of  Liberty”

“I always like to throw in a celebration,” he said.

Slattery’s offensive output may have been expected, but eighth grader Joey Anderson’s play was a pleasant surprise.

Roughly midway through the season Anderson was called up to play regular shifts on varsity.

“I really don’t have the words to describe it,” Anderson said. “Our coach tells us to play within the glass. I was a little nervous standing there for the starting lineups, but when the game started it was just two teams.”

Anderson did not have to look to far for advice on how to handle the pressure of a state tournament game at such a young age.

Pioneers captain Zach LaValle was in the same boat as an eighth-grader.

“I’d like to say that he is obviously more skilled,” LaValle said. “He’s a stud. He’s stronger than half the kids on the ice. It’s fun watching him play. I wish the best for him.”

Getting into the game was not a daunting task for Anderson. If there were any jitters, it was making sure he didn’t take a tumble during the pregame introductions.

“I’ve been nervous about that the whole week,” Anderson said. “That was the only thing I was nervous about. I don’t want to fall or something.”

Centennial was just 75 seconds away from continuing its impressive streak of not allowing a goal in the state tournament.

The only other season the Cougars made it to St. Paul (2004), they won the title with three straight shutouts over  Holy Angels, Wayzata and Moorhead. That remains the only time it's ever happened. It also remained the only time Centennial had qualified for state -- until this winter.

Back in 2004, Greg Stutz manned the crease for Centennial and stopped all 53 shots he faced to help the Cougars cap off a 30-1-0 season. In 2013, current Cougars goalie Patrick Munson was well aware of the streak.

“Stopped in the hall four or five times this week,” Munson explained about the reminders he received. “(They said), 33, they don’t let goals in at the state tournament.

For almost 50 minutes, Munson did more than keep Wayzata at bay in the Trojans' 2-1 overtime victory in the state Class 2A quarterfinals on Thursday, March 7 at the Xcel Energy Center. He turned away every shot he saw and was as calm as one could be on the big stage in front of an announced crowd of 17,293.

That was until Wayzata’s Jalen Wahl scored his fourth goal of the postseason with 1 minute, 15 seconds left in the third.

“It seemed like for five or six minutes we absolutely dominated them,” Munson said “It just came down to them throwing everything on net.”

The Trojans kept the momentum going in overtime. Chase Heising ended it with a shot that rose over Munson’s glove and into the upper right corner, sending Wayzata to the semifinals where it will meet No. 1-ranked Hill-Murray.

“They got the right bounce at the right time,” Munson said. “They made a nice play in overtime. Obviously I wish I would have gloved it.” 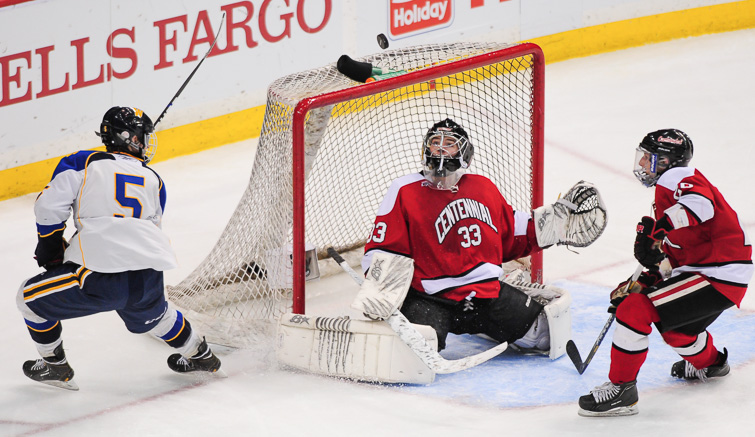 Centennial goalie Patrick Munson (33) keeps his eye on the puck during Thursday's 2-1 Class 2A quarterfinal loss to Wayzata. Photo by Adam Crane.