Dispatches from the X: Moorhead recovers quickly from loss of spectacular goalie 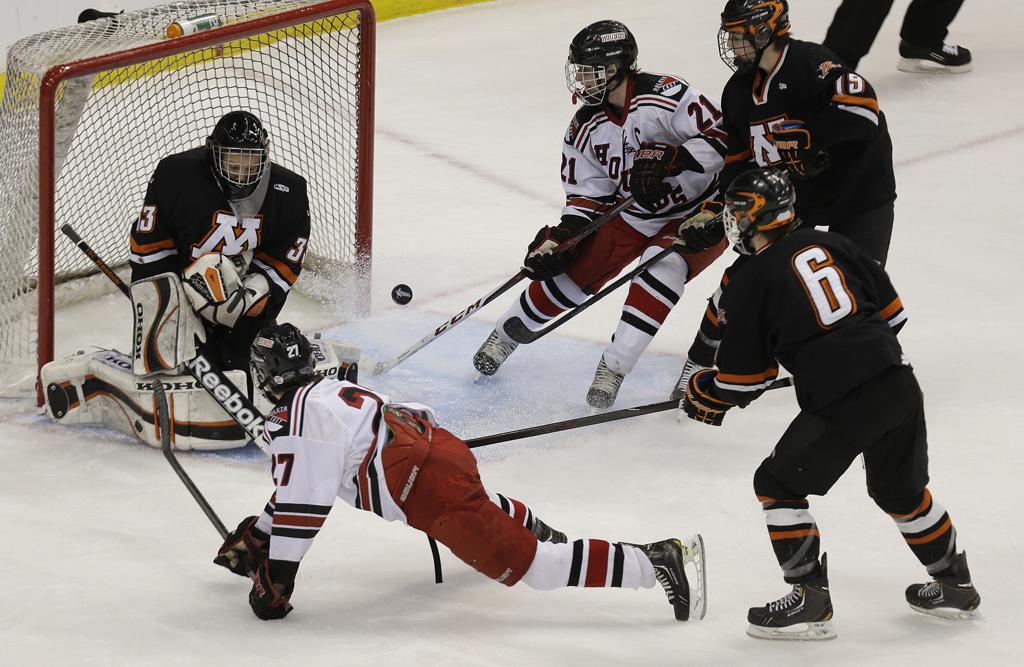 The loss of a special goaltender didn’t hurt the way Moorhead thought it might.
The player sliding into the hole that five-year goaltender Michael Bitzer left behind has proved to be another unique talent. Sophomore goaltender Jacob Dittmer is a work in progress, his coach said, but picked the perfect time to show he can handle the expectations of this highly regarded role.
“It’s the state tournament, so I had to get up for that,” Dittmer said. “It was a lot of pressure [filling Bitzer’s spot]. Obviously I didn’t want to let the city of Moorhead down. I wanted to step up and be the big man this year.”
Dittmer made 29 saves before he was pulled in the final 38 seconds for an extra skater in Thursday’s 1-0 loss to Duluth East.
Once on the bench, he reflected on the one goal that slipped by 1:13 into the third period. His head wasn’t down long. Fellow Spuds patted his back and reminded the sophomore of his impressive efforts that included some of the best saves through two days of the state tournament.
It might have taken him all year to become Moorhead’s “big man,” but after his performance against the No. 2-seed Greyhounds, coach Peter Cullen validated the goaltender.
“That was probably his best game all year,” Cullen said. “That glove and him sprawling to make that save, that really kept us in it. … It was what we’ve been working on with him being a young goalie, and I think he did really well.”
After this praise, he looked in Dittmer’s direction and said, “But don’t get a big head.”
Dittmer would actually prefer a larger noggin if it meant more blocked shots. He’s already throwing every piece of his body at the puck.
Dittmer made sure to seek the counsel of Bitzer — recipient of 2012’s Frank Brimsek award (state’s top senior goaltender) — before the state tournament. Bitzer offered the underclassman tips on bounces and closing the corners on Xcel’s ice. Whatever he said seemed to work for the protégé.
Duluth East players honor former Greyhound
Initials “JH” and “No. 2” are among the decals plastered on Duluth East’s helmets. The sticker is in honor of former Greyhounds hockey player Jon Hedberg, who died last Saturday from head injuries sustained in a skiing accident. He was 30.
Hedberg was a freshman defenseman on Duluth East’s 1998 championship team before leaving after his sophomore year to play in the Ontario Hockey League.
Eastview goes up against Parise
Eastview thought Hill-Murray’s Zach LaValle and Mitch Slattery were a lot to handle in Thursday quarterfinal, but nothing compared to a surprise opponent on New Year’s Day.
Wild left wing Zach Parise skated against the Lightning in its annual Varsity vs. Squirts game.
“Our coach came in the locker room said, ‘They have a big guy on their team,’ and we go out and see Parise,” senior defender Mitch Beattie said. “We were completely surprised.”
The Shattuck-St. Mary’s alum took advantage of ice time during the NHL lockout and posed for photos long after the scrimmage ended. He also scored on a penalty shot.
Eastview hockey announcer Jim Carroll set up the visit. Carroll was a referee for several workouts arranged by local NHL players during the lockout.
Just for boys’ hockey players
Facial hair means a lot to this year’s tournament athletes. Centennial’s junior forward Ryner Gorowsky dyes his mustache. Edina’s Connor Hurley and several of his teammates used the product Just For Men to give their facial hair a darker look. The patches Hurley had grown were too light for his taste.
DAY 2 RECAP
QUOTE OF THE DAY
“I would’ve liked a little more hats. It was probably like my uncle or something that threw it. … People supporting me is great to hear and I love seeing hat throws.”
­Edina junior forward Connor Hurley on the lone red Wild hat thrown to the ice after he collected a hat trick
NUMBERS

1
Shots on goal Moorhead got off after pulling its goaltender for the final 38.4 seconds against Duluth East.

2
Hat tricks in the second Class 2A quarterfinal between Edina and Lakeville North. The Hornets’ Connor Hurley hit the mark first and the Panthers’ Nick Poehling matched it in the final seconds of the game.

9
Years since Centennial and Wayzata played in the state tournament. Both last qualified in 2004, and Centennial defeated Wayzata 3-0 in the semifinals.
42,021 Total attendance after two days. Thursday’s Class 2A quarterfinals attracted 33,298 fans.
THREE STARS

Connor Hurley, Edina: Provided the 2013 tournament’s first hat trick. Goals two and three were scored within 27 seconds of each other and he added an assist to wrap up the big performance.

Andrew Kerr, Duluth East: The senior defenseman helped lead the Greyhounds’ defensive effort that held Moorhead scoreless and to only 12 shots on goal. His legal hit also sidelined Moorhead senior Nicholas Uglem, who was referred to as one of the Spuds’ “big four.”

Zach LaValle, Hill-Murray: Scored two of Hill-Murray’s goals during a 4-0 run that lasted into the second period. He also assisted the Pioneers’ fifth goal.