Going out on top

Tom Novak scores with 6.1 seconds left to give St. Thomas Academy its third straight 1A title 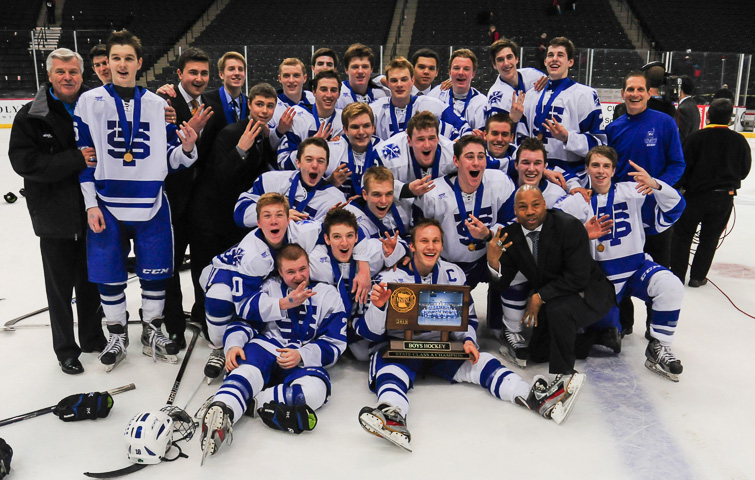 St. Thomas Academy celebrates its third straight Class 1A state championship -- all three coming at the expense of Hermantown. The Cadets will move up to Class 2A next season. Photo by Adam Crane.

Emotions flowed after a controversial yet thrilling conclusion to the Hawks-Cadets rivalry Saturday. St. Thomas twice rallied from two-goal deficits and scored on a power play with 6.1 seconds remaining to win 5-4 and claim its third consecutive Class 1A championship at Xcel Energy Center.

The Cadets (27-2-2) became the first team to win three consecutive titles since Bloomington Jefferson did it from 1992-94. All three came at the expense of Hermantown (25-5-1), runners-up for the fourth consecutive year.

As a metro-area private school in the smaller-school class, the Cadets — winners of five titles in eight seasons — draw more scrutiny than serenade. That reality, coupled with winning a dramatic game, triggered Vannelli’s release.

“I’m really proud of these guys,” said Vannelli, his voice cracking. “They had a target on their back all year.”

The Cadets are opting up to Class 2A next year and will compete in Section 3.

After each team scored once in the first period, crowd favorite Hermantown got second-period goals only 58 seconds apart from Scott Wasbotten and Ryan Kero to make it 3-1. The Cadets had not given up a goal in their first two tournament games.

During intermission, Vannelli mentioned the 2011 final in which Hermantown built a 3-0 first-period lead but the Cadets won 5-4 in overtime. He encouraged his guys to dig deep once more.

Perry cut the Hawks’ lead to 4-3 at 2:53 of the third period, completing the hat trick.

“Just what we needed,” he said. “We made sure no one got down because we know we have some of the best players in the state on our team.”

The Cadets got more aggressive, and it paid off when Henry Hart tied the score 4-4 midway through the third period.

The Cadets went on the power play with less than two minutes left after Scott Wasbotten drew a holding penalty.

Trying to clear a puck from the Hermantown zone, defenseman Jake Zeleznikar said Cadets forward Alex Johnson “had me in a headlock,” but no penalty was called. The puck was played around the Hawks’ net toward sophomore Tommy Novak, who scored with 6.1 seconds remaining.

“His limits are endless,” Perry said of Novak.

Hermantown’s hard feelings could also last awhile. Back on the bench, Bo Gronseth leaned over the boards in agony as Plante screamed at officials.

“To be honest,” senior Chris Benson said, “it stinks.”

Sophomore Tommy Novak scored with 6.1 seconds remaining to complete the Cadets’ third consecutive small-school title. They are the first team in either class to win three in a row since Bloomington Jefferson from 1992-94.

All three of the Cadets’ titles came at Hermantown’s expense. The Hawks, which settled for second place for the fourth consecutive season overall, seemed poised for an upset.

The teams traded goals within the final two minutes of the first period. Matt Perry scored for the Cadets at 15:12 but Chris Benson answered with a power-play goal at 15:54.

Hermantown expanded its lead to 3-1 in the second period on goals just 58 seconds apart from Scott Wasbotten and Ryan Kero. Once again, the teams closed the period with goal in the last two minutes.

Perry tied the game 4-4 and completed the hat trick at 2:53 of the third period.

The game called to mind the 2011 final in which Hermantown built a 3-0 first period lead against the Cadets but lost 5-4 in overtime.

No overtime was needed Saturday. Novak’s goal closed the Cadets’ area as small-school powers. St. Thomas Academy will opt-up to Class 2A next season. The Minnesota State High School League announced earlier Saturday that the team was placed in Section 3.

1. Tommy Novak, St. Thomas Academy
How to get the No. 1 star of the game? How about scoring the state championship winning goal with 6.1 seconds left in the game? Novak stepped off the right wall, calmly crossed into the high slot and ripped a slap shot high stick side on Hermantown goalie Adam Smith. The sophomore was a dominant force with the puck all tournament long.

2. Matt Perry, St. Thomas Academy
With the Cadets reeling, Perry put on a one-man scoring clinic to lead them back from the dead. Perry scored each of St. Thomas Academy's first three goals, keeping them within reach. When he scored just 2:53 into the third to cut the lead to 4-3, the race was on.

3. Ryan Kero, Hermantown
The Hawks needed contributions from its second and third lines and Kero helped provide that, scoring a goal and an assist. His goal with 6:14 to play in the second period gave Hermantown a 3-1 lead -- and made possible thoughts of an upset.