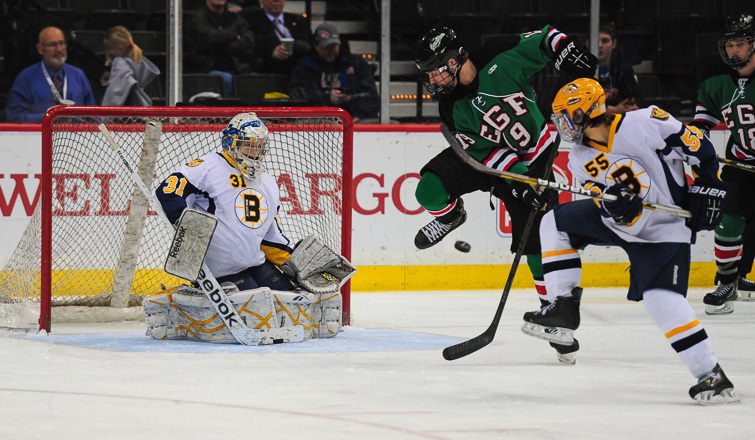 East Grand Forks' Tanner Tweten (19) directs the puck on goal, but Henry Johnson of Breck (31) makes the save. Photos by Adam Crane.

In his five seasons behind the Breck bench, he has led the Mustangs to five state tournaments. They won back-to-back state Class 1A titles in 2009 and 2010.

Larson sat at the podium after the Mustangs’ 3-2 victory against East Grand Forks on Saturday, March 9, in the third place game of the Class 1A state tournament and reflected on the group of Breck seniors that will be graduating this spring.

"This is probably the best group of kids I have had in five years," he said. "Maybe not the most skilled, but the best group in terms of team chemistry."

Breck only has five seniors on its squad and, after heavy losses to graduation, there were some questions as to how the Mustangs would perform this season.

A 25-4-1 record and the third place showing at the state tournament answered that in large part because of the example set by seniors' Thomas Lindstrom, Jack O'Connor, Matt Colford, Andrew Keiser and Ben Gleekel.

"Success breeds success, and good guys breed good guys, and these guys are good guys," Larson said. "They have been a great example to our younger guys."

The Mustangs suffered a 4-3 double overtime defeat to Hermantown in the semifinals and had to wake up at 7:30 a.m. on Saturday to gear up for a final showdown with the Green Wave.

The early wakeup call didn’t deter the Mustangs from capturing another trophy.

"We wanted to come out and get a W for the last time we played together," Colford said.

"We have five seniors here, and this is their last game," Larson added. "This is the last time this group of guys will play together. We've had a great season, so let’s put something together here."

Breck had to only look to its group of seniors to lead the way.

It was Gleekel's turn next.

He has been a part of the Mustangs for the past three seasons, but not one who saw regular ice time as a fourth liner.

Epitomizing the role as one of Larson's “best guys,” Gleekel was named as one of Breck's captains.

He only scored five goals heading into the state tournament, but he capped his career with a goal to give the Mustangs a 2-0 lead when his wrist shot beat Lindstrom in the upper corner from the slot.

"It was great," Gleekel said. "I have been to the state tournament the last few years but I have been a fourth-line guy, so I never really got to play that much. To end my hockey career with a goal and an assist was pretty awesome. It was a great way to go out."

Gleekel assisted on Michael Orke's goal late in the second, which ended up being the game-winner.

Aside from getting a crack at No. 1-ranked (Class 1A) St. Thomas Academy for the third time this season and in the championship game, it was as close to a perfect way for the Mustangs' seniors to end their high school careers.

"These guys have been great leaders all year long," Larson said. "Never say die. All you want as a coach is to have your guys do what you want them to do and those guys came through all year long. In that regard this has been my best group in five years."

Senior forward Ben Gleekel had a goal and an assist, and junior goaltender Henry Johnson made 26 saves as Breck held off hard-charging East Grand Forks in the third-place game of the state Class 1A tournament on Saturday, March 9, at the Xcel Energy Center in St. Paul.

Thomas Lindstrom and Michael Orke also scored for the Mustangs (26-4-1) as they built a 3-0 lead by late in the second period.

Senior Tommy Hajicek got East Grand Forks (23-5-3) rolling in the third, scoring twice to ensure a frantic finish that required several clutch saves from Johnson for No. 2-seeded Breck to secure the win.

Tanner Lindstrom made 14 saves for the Green Wave, the tournament’s No. 5 seed. East Grand Forks was making its first state tournament appearance since 2002 and eighth overall.

Kolton Aubol and Dixon Bowen assisted on both of Hajicek’s goals. Gleekel was the only Breck player with multiple points.

Breck was making its fifth straight state tournament appearance. The Mustangs won titles in 2009 and '10.

1. Ben Gleekel, Breck
A senior forward, Gleekel apparently is a morning person, as he scored a goal and notched an assist in the second period as the Mustangs built a 3-0 lead in a game that started at 9 a.m. The goal was his sixth of the season.

2. Tommy Hajicek, East Grand Forks
Just when it appeared the Mustangs were going to sleepwalk to the third-place trophy, Hajicek injected some life into the Green Wave and their boisterous fans. He scored twice in the third period, and he finished with a team-best six shots on goal. He finished the season with 47 points on 23 goals and 24 assists.

3. Henry Johnson, Breck
The Mustangs’ junior goaltender stopped 26 shots and was particularly busy in the third period when the Green Wave finally got rolling. Johnson made 10 of his saves in the final period.