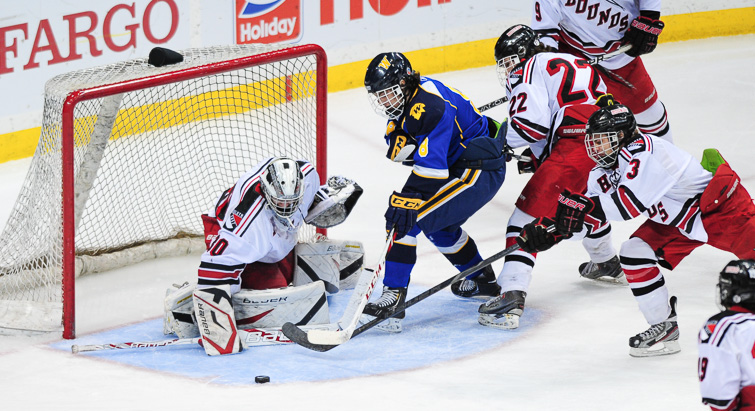 Phil Beaulieu and Alex Toscano each scored twice and added an assist, and Ryan Lundgren had three assists as Duluth East beat Wayzata 7-3 in the third-place game of the state Class 2A tournament on Saturday, March 9, at the Xcel Energy Center in St. Paul.

Beaulieu opened the scoring 58 seconds into the first period, sparking a run of four unanswered goals for the No. 2-seeded Greyhounds (26-5-0). He also scored late in the second to put the Greyhounds ahead 5-1 heading into the third period.

Toscano scored to put Duluth East ahead 2-0 after the first period and got his second goal in the third period.

1. Phil Beaulieu, Duluth East
The junior defenseman was fired up after a pregame tumble. Beaulieu forgot to take off his skate guards for warm-ups but was more than ready come gametime. Beaulieu scored 58 seconds into the contest and finished with two goals and an assist.

2. Alex Toscano, Duluth East
As a senior playing in his third state tournament, Toscano knew the importance of going out and getting some hardware. He contributed to the Hounds effort by playing a smart game and racking up two goals and a helper.

3. Ryan Lundgren, Duluth East
After being noticeably worn down against Edina, Lundgren played a spectacular game. He made plays, wheeled around the rink and finished with three assists to lead the Hounds to third place.