Edina players pour from the bench on their way to the mob surrounding Hornets' goaltender Willie Benjamin after beating Hill-Murray 4-2 in the state Class 2A championship game. Photo by Brian Nelson

Curt Giles gave his Edina boys’ hockey team a simple directive for its state tournament run — get your best game on the ice.

From there, Giles took comfort in knowing his talented, senior-laden team would employ its best assets: listening hard, working harder and taking on every challenge.

The payoff came with a 4-2 victory against top-ranked and No. 1 tournament seed Hill-Murray in the Class 2A championship game Saturday at the Xcel Energy Center in St. Paul.

Saturday’s victory counts as the 11th state title in Edina’s history, including three titles won as Edina East. The most recent previous title came in 2010, captured by an unheralded group of hockey players Giles affectionately called mutts and clowns. His latest title team contains some of those elements.

Giles used the term “goofballs” while extolling his team’s virtues. Several of those characters played with character.

Hill-Murray took an early 1-0 lead. Dylan Malmquist tied the score 1-1 and also settled a score with Hill-Murray goaltender John Dugas, who slid across the crease to deny Malmquist earlier in the power play. Taking the puck into the Pioneers’ zone with speed, Malmquist maneuvered around Dugas’ outstretched leg and scored.

Junior Cullen Munson scored the next two goals as Edina built a 3-1 lead about five minutes into the second period. Bo Brauer’s determination set up Munson’s second goal. Brauer rang the post with a shot but followed the puck into the corner, took it behind the Pioneers’ goal and sent it toward the slot for a waiting Munson.

Those goals sandwiched a key defensive stand during a 5-on-3 Hill-Murray power play that did not produce a goal.

Anthony Walsh then transformed from grinder to trophy goal scorer. Blocking a Hill-Murray shot, Walsh hustled to collect the puck and buried his breakaway for a 4-1 Hornets’ lead at 14:29 of the second period.

Walsh claimed to ponder several options as he skated toward the goal before deciding to shoot the puck under Dugas’s legs.

Giles joked it was “the biggest lie” Walsh ever told.

“He was coming in 200 miles per hour,” Giles said. “But when he got the puck in that situation I thought, ‘He deserves something special to happen.’ ”

Just 47 seconds later, Hill-Murray’s Josh French cut the deficit to 4-2 with his second goal of the game. But the Pioneers’ could get nothing else past against Edina goaltender Willie Benjamin. He stopped 25 Hill-Murray shots, including point-blank chances on the power play by Mitch Slattery and Joey Anderson late in the game.

Illness and injury left Edina shorthanded in a 2-1 overtime loss to Hill-Murray in early January. Benjamin, Malmquist and forwards Miguel Fidler and Andy Jordahl showed their worth in myriad ways Saturday by stopping pucks, scoring goals skating on different lines and keeping the Pioneers off their game with physical play.

The effort was contagious. Connor Hurley, who tallied a hat trick in the quarterfinals, was most visible when back-checking. Tyler Nanne played forward and defense with aplomb.

Saturday’s game served as the storied programs’ title game rubber match. Edina won it all in 1988 and Hill-Murray evened the series in 2008. 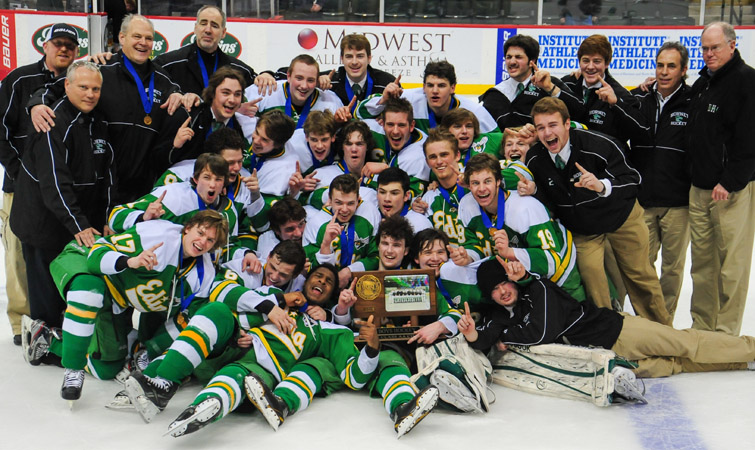 Edina won the state Class 2A championship on Saturday with a victory over Hill-Murray at the Xcel Energy Center in St. Paul. Photo by Adam Crane 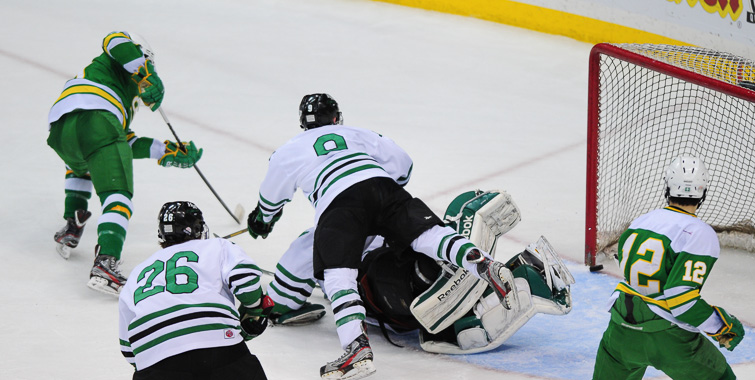 Cullen Munson scored twice as Edina took a 4-2 lead into the third period of the Class 2A state championship game against Hill-Murray. Photo by Adam Crane.

The victory counts as the eighth in Edina’s history, plus three additional titles as Edina East.

Cullen Munson scored twice and Dylan Malmquist and Anthony Walsh each scored once for Edina, which trailed 1-0 early before roaring back to score the game’s next four goals. Josh French scored both of the Pioneers’ goals.

The game served as the storied programs’ title-game rubber match. Edina won it all in 1988 and Hill-Murray evened the series in 2008.

1. Cullen Munson, Edina
The Hornets were led by their big first line all playoff long, but it was Munson who made the biggest impact on the biggest stage. The junior forward turned a 1-all tie into an insurmountable 3-1 Edina lead with two straight goals. First, he corraled a rebound and tucked it behind Hill-Murray goalie John Dugas at 11:56 of the first period. Then he one-timed a pass from Bo Brauer just 2:11 into the second period.

2. Willie Benjamin, Edina
Edina was outshot 27-22, but Benjamin stopped 25 for the victory. The veteran goaltender was calm in goal, looking as if the state title game was any regular season effort and standing tall when the Pioneers banged away on a 6-on-4 power play late in the game.

3. Josh French, Hill-Murray
French scored both Pioneers' goals in Hill-Murray's second straight disappointment in the Class 2A championship game. The slippery forward was a force against a tough and stingy Edina defense.