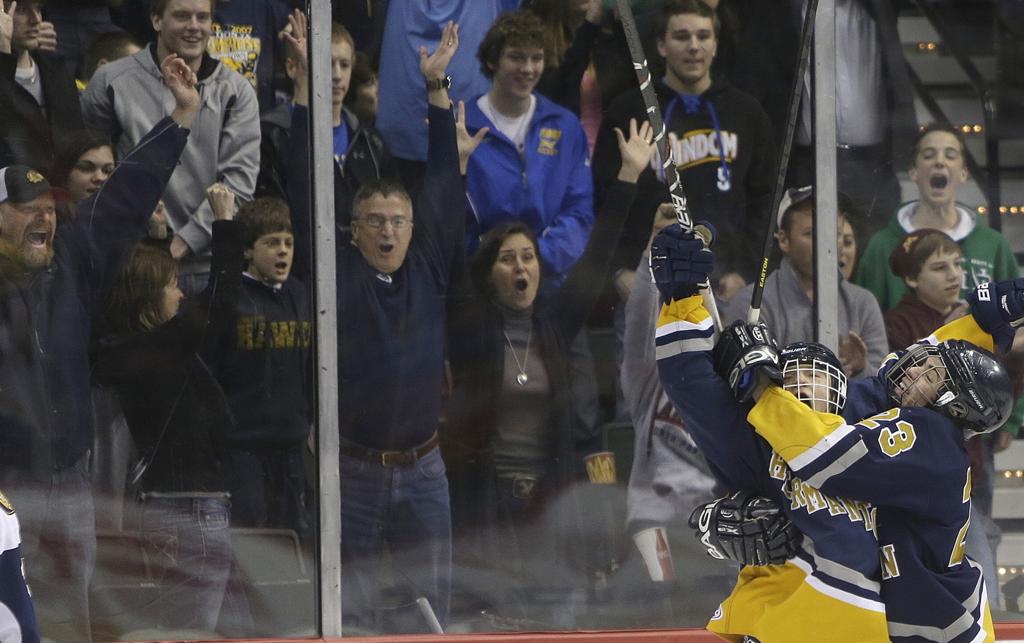 Hermantown's Zach Kramer is congratulated by teammates after scoring the winning goal of the state Class 1A tournament semifinals. Star Tribune photo

With Thursday night off from Class 1A state hockey competition, four Hermantown defensemen sought dinner before heading to the Xcel Energy Center as spectators.

Sitting down at the St. Paul Grill, senior Jake Zeleznikar found his wallet overmatched. Steaks starting at $28.95, no matter how delicious, were not budget-friendly.

“We ended up getting the bacon cheeseburger off the kids’ menu,” Zeleznikar said. “One of the guys only had a $20 bill so I had to help him out with dessert.”

A double-overtime victory against Breck in Friday’s semifinals reserved Hermantown’s seat at another prestigious table. The Hawks play at noon Saturday in their fourth consecutive Class 1A title game.

Their opponent, St. Thomas Academy, defeated Hermantown in the past two championship games. The Cadets, like the Hawks, lean on a deep, talented defensive corps to limit shots and control games.

Both groups of defensemen were rebuilt and refined during the season.

Breck’s three goals on Friday were the most scored by a Hermantown opponent since a Jan. 15 loss to Superior (Wis.). The Hawks have not lost since and enter Saturday on a 14-game winning streak during which they allowed just 14 goals.

Zeleznikar said the Superior loss, Hermantown’s third in four games, “shook us out of our little ‘We are untouchable’ daze.”

Midseason was also when the Hawks’ varsity newcomers found their rhythm. Seniors Joe Muehlbauer and Christian Wasbotten played two seasons of JV hockey before making their varsity debuts this season.

The 6-foot-3 Muehlbauer was paired with future Minnesota Duluth defenseman Neal Pionk. They faced Breck’s dangerous top line for much of Friday’s game.

“It’s been a blessing for us to get those two off the JV,” Hawks coach Bruce Plante said. “They are tough, mean, nasty, hard-nosed kids.”

“From the beginning of the season we knew we had six good D,” said Schmidt, who scored four goals in Friday’s semifinals. “We put it all together and now we have one game left.”