Dispatches from the X: Three sets of Hermantown brothers are teammates, rivals 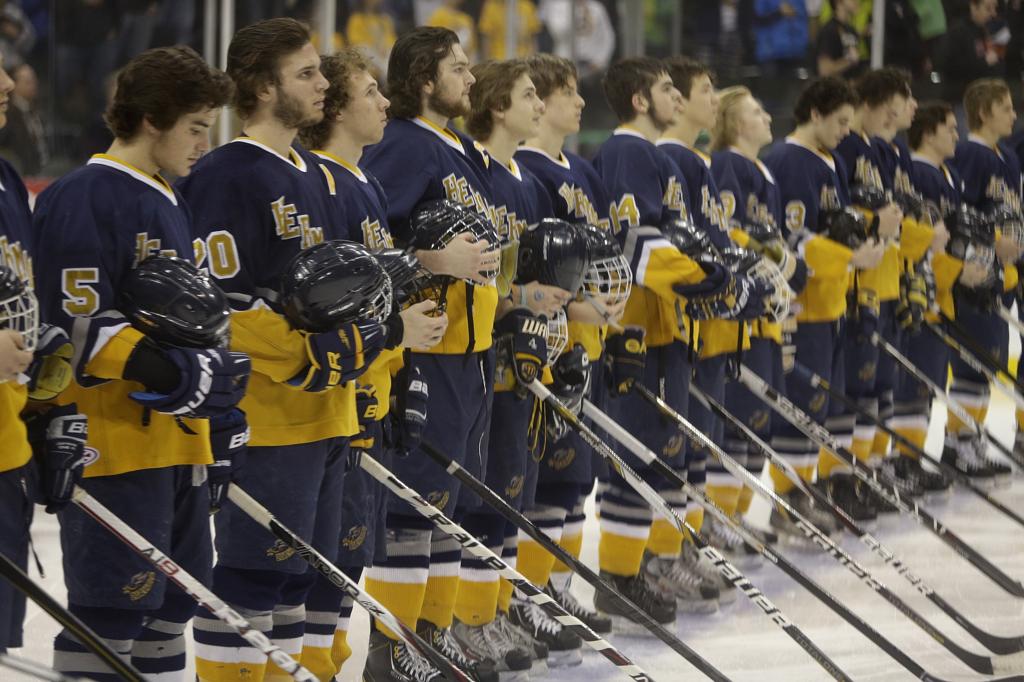 Hermantown lines up for the National Anthem at the state Class 1A tournament. Star Tribune photo

Jake Zeleznikar assisted on a goal in Hermantown’s 4-3 double-overtime Class 1A semifinal victory on Friday. Younger brother Jared didn’t. Neal Pionk assisted on two. Brother Nate Pionk watched his elder celebrate. Scott Wasbotten was on the ice while two goals were scored. Older brother Christian Wasbotten skated during one of the Hawks’ goals.

This is how the three sets of Hermantown brothers like to describe their relationship — as a competition. Before friendship, the brothers prefer outdoing one another. Any time one takes the ice, the other is thinking how he can best his sibling.

“I think it’s more of a rivalry,” Zeleznikar said. “It’s more of a battle. Especially in practice. We try to outdo each other.”

For the most part, the elders achieved that against Breck. The junior Wasbotten, however, could argue he outplayed his senior brother. Zeleznikar said this is the biggest rivalry of the Hermantown brothers trio.

Scott Wasbotten is bigger than Christian and, like the rest of the younger brothers, sometimes hears advice from the elder brother as criticism.

“Those Wasbottens … most our [team] fights are between them,” Zeleznikar said. “It’s fun to watch.”

Though the rivalries are heated, the unique bonds have made the Hawks closer, Zeleznikar said. Longtime coach Bruce Plante said he’s never had anything like it among the many teams he’s coached.

Mustangs coach Les Larson carries a fan that belonged to his mother to every trip Breck makes to Xcel Energy Center. Though many of the current Breck players don’t know of its significance, it’s special to Larson and several of his graduated teams. A good luck charm, superstition, or tradition, whichever one helps the Mustangs advance that day.

The now-deceased Agnes was at every game her son played or coached. Hockey was almost as important to her as Les.

“She loved hockey,” the coach said. “Tim McNeill [of Notre Dame hockey] used to tell me, ‘There is only one person at the rink longer than me, and that’s your mother.’ Now we have to prop that door and blow Agnes’ fan.”

The city on the border of Minnesota and North Dakota shares the two programs and many family ties. Sophomore center Dixon Bowen’s dad played and coached at UND. He led UND to a national title in 2000.

Eddie Eades’ dad played for and coached a national championship UND team. Green Wave coach Tyler Palmiscno played at UND, along with a brother of East Grand Forks current Loven pair of brothers. Colton Poolman’s father is an athletic trainer at UND, and his brother Tucker has committed to play for UND.

Tweet it
Wayzata goaltender Aaron Dingmann expressed his excitement through Twitter before Thursday’s quarterfinal using the hashtag “amped.” He stuck with the descriptor to explain his emotions after winning an overtime thriller against Centennial.

“Probably a little more amped up than before the game,” he said.

Wayzata’s Pat O’Leary stepped in to help the senior explain himself by saying, “I think he’s going to retweet his own tweet.”

QUOTE OF THE DAY

“Coming into the game knowing we can win it. … Playing with no fear.”
Hermantown senior center Travis Koepke on how the Hawks can finally break the trend of finishing in second place

19
Seconds between Edina’s second (go-ahead) and third (insurance that was needed) goals in the third period against Duluth East.

Zach Kramer, Hermantown: The unusual scorer’s double-overtime goal propelled the Hawks past Breck and into the Class 1A championship game.

Wyatt Schmidt, St. Thomas Academy: Despite all the scoring the Cadets have done, Schmidt is the first to get a hat trick in the state tournament. He finished with four goals Friday.

Tyler Nanne, Edina: The junior scored a go-ahead goal in the 12th minute of the third period and also broke up a breakaway from behind with his stick.