Show me the way 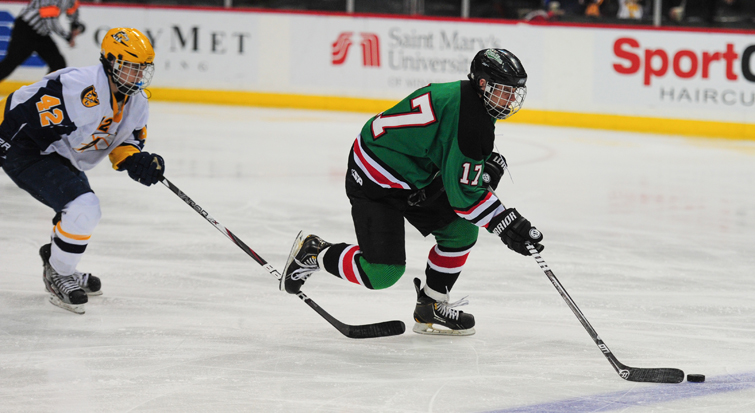 Tommy Hajicek (17) skates up ice during East Grand Forks' 3-2 loss to Breck in the Class 1A third-place game. Hajicek scored twice and is one of seven seniors graduating for the Green Wave. Photo by Adam Crane.

Tommy Hajicek sat at the press conference podium in nearly full uniform, unwilling to remove the Green Wave crest. He certainly earned the right to hold onto it as long as he wanted.

The talented senior had just played his last game for East Grand Forks, a 3-2 loss to Breck in the Class 1A third-place game at the Xcel Energy Center Saturday morning, March 9. Hajicek went out with a bang, scoring twice in the third period to give his team life in a game that seemed out of reach through two periods.

The mostly empty arena was lifeless as the Green Wave trailed 3-0 entering the third. But Hajicek quickly provided a spark for his team -- much as he has done all season long.

"It's my last period as a Green Wave hockey player and the energy takes care of itself," said Hajicek, who led the team in scoring.

"With this young team, energy is never an issue," coach Tyler Palmiscno said. "Obviously, I don't think either team was happy to be here at 7:30 this morning. But you're still playing for the jersey and your teammates."

No player inspires his teammates more than Hajicek. He cut into the Breck lead, tipping in a nice passing play from line mates Kolton Aubol and Dixon Bowen midway though the third.

"I didn't think we played that badly in the first two periods," said Palmiscno, noting the three posts the Green Wave hit. He challenged his team in the locker room before the third to send the seven seniors out right.

"It didn't feel to me like a 3-0 hockey game. I knew if we could get the first one early in the third it could give us some energy and momentum," Palmiscno said. "At that point, it's a game."

Hajicek made it even more interesting with 1:25 to play when he redirected in his second goal of the game, again with assists to Aubol and Bowen. The Green Wave pulled senior goaltender Tanner Lindstrom, but couldn't net the equalizer.

Long before noon, the Green Wave's state tournament experience was over. Despite losing its last two games to Twin Cities private school powers St. Thomas Academy and Breck, East Grand Forks was proud of its first trip to St. Paul since 2002.

"It's been an outstanding year. I've had a blast," said a red-eyed Hajicek. "Our coaching was unbelievable and our seven seniors were unbelievable, and so were our underclassmen."

Those youngsters are the key to what appears to be another big run in East Grand Forks. With a lineup peppered with freshmen, sophomores and juniors, it shouldn't be another decade before the Green Wave are back at the X.

"They're going to have a very, very good team," said Hajicek, speaking of the program in the third person as if coming to grip with letting go. "I wouldn't be surprised to see them down here again."

"Without a doubt, the community is excited and the team is excited," said Palmiscno. "The future is bright if we continue to work."