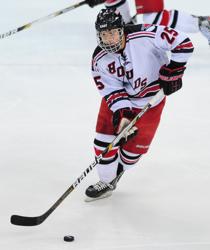 It’s interesting to see how teams come out in the third place games at the state tournament. The chance to go out with a win isn’t always enough consolation off of what had transpired in the previous game.

Teams want more, but they can’t get it. Focus isn’t always there, and it’s often times a sloppy contest.

For Duluth East defenseman Phil Beaulieu, third-place game pregame indications may have seemed to be pointing in that direction.

Beaulieu was in such a hurry to get on the ice for warm-ups on Saturday afternoon that he forgot one minor detail in preparation.

When Beaulieu stepped on the sheet at Xcel Energy Center, he quickly found out what exactly that detail was.

“I took a tumble,” said a smiling Beaulieu of his pregame memory lapse. “I didn’t event think about taking them off. Coach [Dylan] Mills was saying to everyone, ‘Watch this, watch this’ and I didn’t think about that until it happened.

After Friday night’s heartbreaker against Edina, that turned out to be just what the Hounds needed. They had been physically and mentally beat up less than 24 hours earlier, and the light moments set the tone for the rest of the afternoon.

It gave them a boost. It lifted the spirits. Oh, and it sparked Beaulieu, too.

The junior blue-liner connected on a pair of goals – including one just 58 seconds into the game – to help the Hounds take home the third-place hardware with a 7-3 win over Wayzata.

“I don’t usually score goals, so it’s nice to end the season like that,” Beaulieu said. “[The pregame fall] was good for us, kept us loose.”

Coach Mike Randolph didn’t expect anything less out of this group of Greyhounds.

“This is one of my favorite teams to coach,” he said. “It speaks volumes to the type of character this team had all year. Personally, I didn’t expect anything less. The room is full of guys that have been here before and understand that the tournament’s not over just because you lose a game.

Wayzata coach Pat O'Leary and Duluth East coach Mike Randolph sat together Wednesday night at the state tournament banquet -- the opening event to a wall-to-wall weekend of hockey. The longtime Greyhounds coach was in his 14th state tournament, while O'Leary was just entering his first with the Trojans. Naturally, talk turned to hockey.

"One of the things he told me was, 'Just enjoy it,' " O'Leary said, then added that Randolph mentioned the hectic schedule the Trojans were about the experience. O'Leary took that advice to heart, but it really hit home by the time the wearying stretch ended with a 7-3 loss to Randolph's Duluth East team in the Class 2A third-place game Saturday afternoon.

"We were not good, as you can see," O'Leary said. "I don't know. It was our first time in something like this and I'm not making excuses but we definitely weren't ready to play."

"We were ready to play, I think mentally and physically, but we just didn't execute on the ice. When you're not ready to play in the third place game of the state tournament, you're going to get shelled. Yeah, that was it."

O'Leary added that keeping his team focused was something the coaching staff would take from the experience. With the Trojans on the rise as a program, there should be more state tournament visits in the near future.

"Ultimately, the off-the-ice deals with the hotel situations and all the media and the schedule they're on, that's something you can learn," said O'Leary. 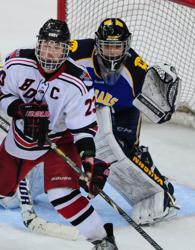 Senior goaltender Aaron Dingmann was the rock upon which Wayzata's state tournament season was built. So it was with a heavy heart that coach Pat O'Leary removed his team's foundation from the game after allowing the first four goals in a 7-3 loss to Duluth East in the Class 2A third-place game Saturday afternoon.

"By no means did I pull him for the way he was playing," said O'Leary. "It was out of 100 percent respect for the kid. He got us here and we all know that. None of the goals they scored were soft goals whatsoever. He didn't give up.

"He was ready to go, but our guys weren't playing in front of him."

Dingmann's exit came 4:01 into the second period after Alex Trapp's goal gave East a 4-0 lead. The senior had made 11 saves on 15 shots to that point. Dingmann watched the rest of the night from the bench, as sophomore Jens Vaughan Ahrens allowed the final three goals on 16 shots.

"I didn't want to leave him out there like that for what he's done for these kids and our program," said O'Leary.