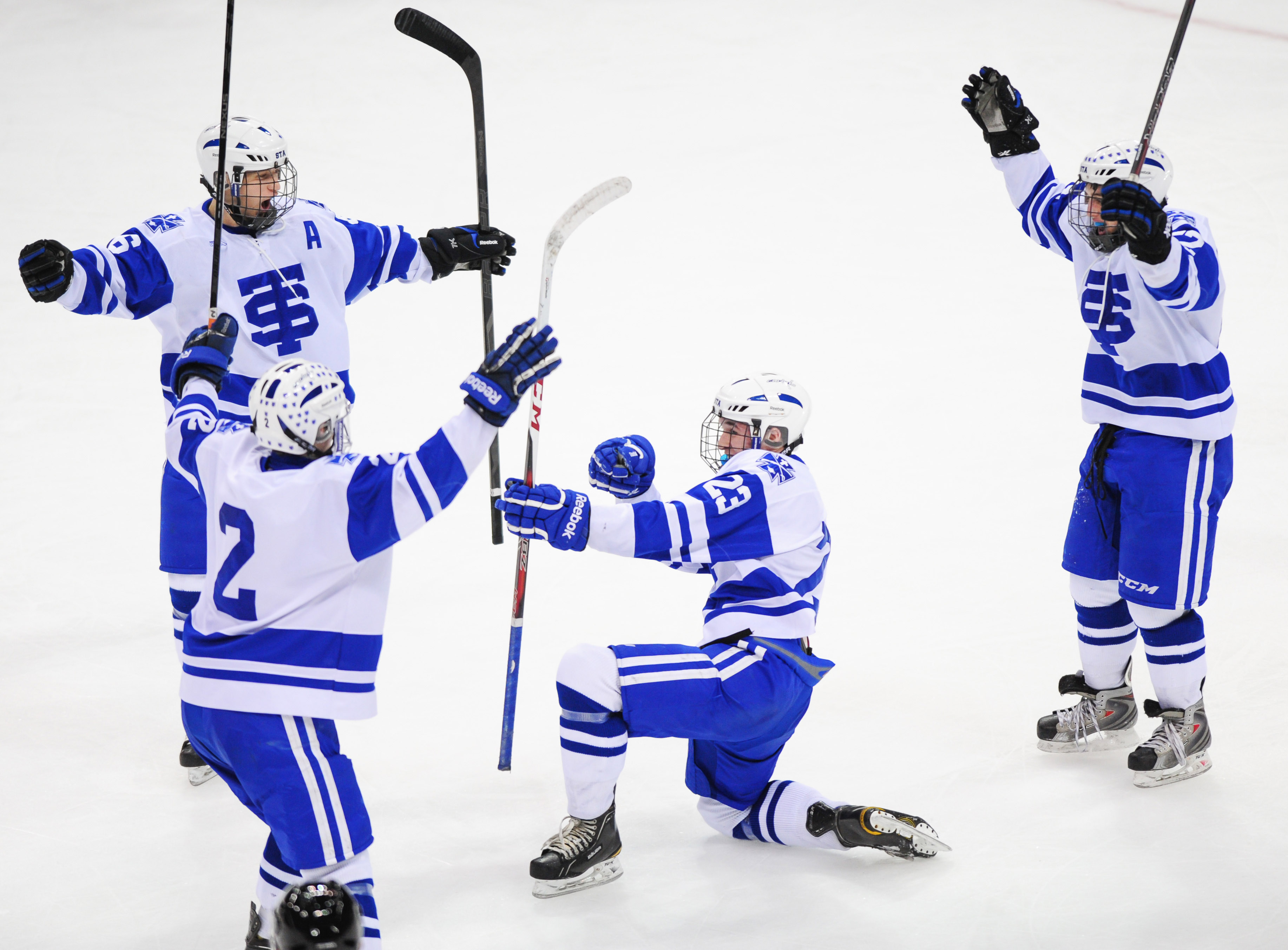 St. Thomas Academy's Matt Perry celebrates after scoring one of his three goals against Hermantown in the Class 1A championship game. Photo by Adam Crane

For every hero there must be a villain.

For every black hat there must be a halo.

For every private school behemoth everyone loves to jeer there must be a public school powerhouse for which an enitre state can cheer.

And, in the eyes of Hermantown coach Bruce Plante, for every penalty called on the Hawks in the final two minutes of a tied state championship game, there must also be an penalty called on St. Thomas Academy for an equally egregious foul.

Much to Plante’s dismay, the ying and yang of one of the most drama-infused games in recent state tournament history didn’t include that last part.

Hermantown lost to St. Thomas Academy 5-4 on a power-play goal by Tommy Novak with 6.1 seconds left on Saturday, March 9, at the Xcel Energy Center in St. Paul.

The loss was Hermantown’s third straight to the Cadets in the state championship game. It was the Hawks’ fourth straight title-game loss. 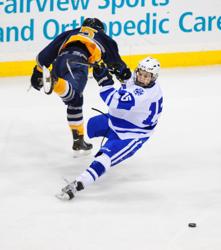 Hermantown’s losses all have come in excruciating fashion. A winning shot deflects off a Hawks player’s shin pad late in the third period. A point shot in overtime somehow makes its way through a maze of players. A blowout.

Immediately after the game Plante stormed across the ice to get in the ear of one of the referees. Then he stood alone near the Hermantown bench, arms folded and face red, during the postgame awards ceremonies.

No, Plante was not happy. Not at all. Reporters, state high school league officials and a throng of interested onlookers all waited elbow-to-elbow in a jammed postgame media conference room to hear what the notoriously outspoken coach had to say.

It’s not often you can secure a front-row seat for Mt. Vesuvius. Thing is, the eruption never came.

“Well, this is probably the most difficult loss I’ve ever had in my life right there,” Plante said. “You get calls like that at the end of the game that weren’t even calls.

If Plante didn’t like the holding call on junior forward Scott Wasbotten with 1 minute, 57 seconds left – and he most certainly didn’t – then he about went through the roof when no penalty was called after Hawks senior defenseman Jake Zeleznikar got tangled with a Cadets player while trying to clear the puck out of the Hermantown end a minute or so later.

Zeleznikar never was able to clear the puck, though he did about lose his helmet in the exchange with Alex Johnson. A few seconds later St. Thomas Academy sophomore Tommy Novak scored on a blistering slap shot.

“I thought they should have made a call right there,” Plante said. “Their guy wraps our guy up and (Novak) skates around and scores the winning goal. I don’t know, they just let it happen.”

The game was dripping with intrigue even before puck drop. There’s the history between the two teams, Plante’s public stance on private school versus community based hockey, the Cadets’ ascension to Class 2A next year and the rumblings that Hermantown should do the same.

Then the call, no-call controversy.

If anyone from, say, South Carolina ever asks what’s so great about the state boys' hockey tournament, this game wouldn’t be a bad place to start by way of an explanation. 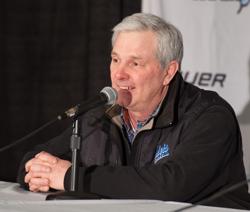 “My brother actually said to me right after the game, ‘What more would they want than a game like this? How can anybody be upset? ” St. Thomas Academy co-head coach Greg Vannelli said about Cadets' co-head coach Tom Vannelli.

Plante played his high school hockey at Cloquet. When he was growing up, fans across the state joined forces to cheer for the small northern teams and against the big city, big school powers.

“That was the big deal in the 60’s and 70’s when I was a kid,” Plante said. “I loved that of course. I thought it was great. Now it’s private high schools versus public high schools, and I just don’t believe that we should get these kids from wherever.”

Greg Vannelli grew up in the north end of St. Paul and played his high school hockey for St. Thomas Academy. He said he never pulled for or against individual teams as much as he did root for the star players.

“He was a big hockey guy in the Twin Cities,” Greg said about his father, Ron Vannelli. “He got Tommy and I really into it. Yeah, we were glued to our TVs from the when the state tournament started until it ended when we were 4 or 5 years old.”

“I liked heroes,” he said. “It was so fun to watch great players step up for three games in a row, it was phenomenal.”

Imagine then, what Vannelli was thinking when he saw Novak, the Cadets’ most gifted scorer, score the winner.

“Of all the guys to score a goal like that, he does it,” Vannelli said about Novak. “He did it in the Schwan Cup against Edina in overtime, same thing.

“Certain guys have this magic, and you can’t teach that. It was fabulous.”

So was Saturday’s game. About as good as they come.

“This is exactly what the state tournament is all about,” Vannelli said.