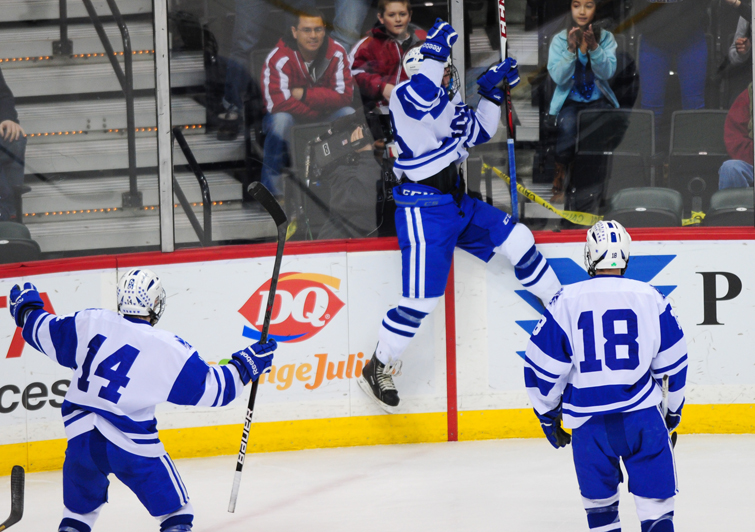 Matt Perry (23) of St. Thomas Academy celebrates one of his three goals during the Class 1A state championship victory over Hermantown. Photos by Adam Crane. 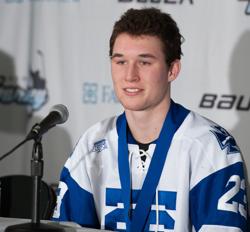 St. Thomas Academy senior Matt Perry was asked if he knew if Hermantown goalie Adam Smith lost his stick when he scored his first goal in the Cadets 5-4 victory in the Class 1A state championship on Saturday, March 9 at the Xcel Energy Center.

Perry couldn't answer right away. He had to look to his right where Cadets' co-head coach Greg Vannelli was sitting and ask him.

"When you're in the moment, there's so many emotions you just kind of forget what happens," Perry said. "I'll definitely have to go back and look at it and relive it."

Perry scored three goals to propel the Cadets to their third straight state championship and fifth in school history.

"It's unbelievable," Perry said. "I wasn't expecting anything. I just wanted a state championship. Three goals on top of it. It's icing on the cake."

Perry capped off his senior season with seven goals at the state tournament.

Known to be a defensive specialist, Perry found his scoring touch at the most opportune time.

"He’ll admit he's not our goal scorer," Vannelli said. "Typically his job is to shut down first lines, which he does so well. For him to have the opportunity to score like that, he gave it all he had and I'm really proud of Matt.

"One of the best performances by a senior I've coached."

Perry also delivered when the Cadets needed a spark. Twice they were down by two goals and twice Perry pulled them back.

Fellow senior Henry Hart connected with him on a give-and-go where Perry fired a shot from the slot to beat Smith.

After Hermantown scored a goal late in the second, Perry stopped the bleeding with his final score early in the third. Crashing the net, he popped in a rebound and in front of the Hawks' student section let them know who he played for by prominently displaying the Cadets' logo to them.

Needless to say he wasn't received to well from the Hermantown faithful.

"I didn't say anything," Perry said. "They had a few things to say to me."

Perry didn't have to. His play did all the talking and some.

If he wasn't going to talk, he could just keep smiling. It was a mile wide after the Cadets' third straight championship.

How long will that smile be there for?

Perry finishes his high school career with 33 goals and more than 20 percent of those came this week in St. Paul.

"Matt Perry stepped up out of nowhere," Vannelli said.

He may not have been a household name before, but Perry will forever be noted in the Cadets' history books.

"There's nothing better," Perry said. "It's the most incredible thing."