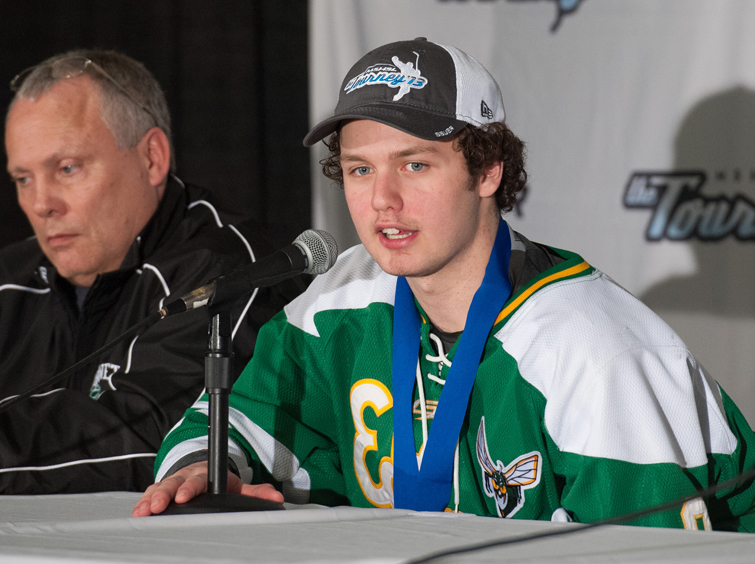 Junior Cullen Munson talks in the postgame press conference about his two goals that helped Edina claim a 4-2 victory over Hill-Murray in the Class 2A state championship game. Photo by Adam Crane.

Five-goal Grant Besse explosions aside, when a team wins a state hockey championship, it's largely earned on the offensive contributions of more than just one superstar player or big line. It's the unexpected that often takes a program to the top of the heap.

With his seven regular season goals, Edina junior Cullen Munson won't be confused for Besse any time soon, but he came up just as big in the Hornets' 4-2 victory over Hill-Murray in the Class 2A state championship Saturday, March 9 at Xcel Energy Center.

Munson turned a 1-all tie into an insurmountable 3-1 Edina lead with two straight goals on either side of the first intermission. First, he corralled a rebound and tucked it behind Hill-Murray goalie John Dugas at 11:56 of the first period. Then he one-timed a pass from Bo Brauer just 2:11 into the second period.

"I know I'm not like a goal scorer," admitted Munson, who reached into his portfolio of cliches to describe his usual contributions as "just doing my job."

Munson shrugged when asked about the goals, preferring to talk about the Hornets' eighth state championship (11 in total counting the titles won when the school was split into Edina East and West).

"I just wanted to win the game first off," Munson said. "Scoring two goals is nice, but it's great to win."

Forgive Munson for his brevity. After most Hornets' games, the media flocks to the Hornets' celebrated goal-scorers such as Andy Jordahl, Dylan Malmquist and Connor Hurley. Munson shuffles by unnoticed by the horde -- but not by his coach.

"When you play in a tournament like this, a lot of team will focus on trying to shut that No. 1 line down -- or at least minimize them to a certain amount of damage," Edina coach Curt Giles said. "So what has to happen is that (Miguel) Fidler's line, (Tim) Spicola's line, (Cullen) Raasch's line have to chip in and do some things they've done all year. 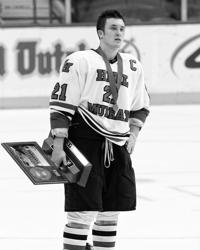 One of the more difficult tasks for a coach is to maintain a level of consistency with all of his players. Should he treat them all equal and not show the emotions with them that he may feel?

First, not many players crack the Pioneers' varsity roster when they are in eighth grade. And they also don’t have the success together that Lechner and LaValle have had together.

In his five-year journey with the Lechner and the Pioneers, LaValle experienced four state tournaments and two title games. But their relationship goes much beyond that.

Hockey reigns supreme at Hill-Murray and garners the statewide attention, but LaValle also excelled in football and baseball, leading the Pioneers to state as quarterback in 2011 and 2012 and on the diamond in 2011.

"He had four high school hockey tournaments and two football and one baseball," Lechner said. "And I’ve been blessed to be able to be able to coach him in baseball and hockey."

The two have shared many experiences together in the past five years, so it was understandable when Lechner let his guard down when he talked about LaValle.

"It’s a little emotional but you know, he’s such a good person," Lechner said. "On and off the field, in the classroom, in the cafeteria, in life."

On the press conference podium following a 4-2 loss to Edina in the Class 2A state championship game on Saturday, March 9, the two shared a hug for the final time as hockey companions.

"Well, I told him I loved him," Lechner said. "I hope someone is listening and believes he can play at the next level and Zach’s going to show that, and we’re proud of him but life goes on. He’s got to go on without us and we’re going to support him wherever his dreams take him.”

In his final two seasons, LaValle played the role of leader in many ways.

He donned the “C” on his left shoulder both years. LaValle was the voice that Lechner leaned on when it was time for a player to deliver a message.

On the ice he was even more valuable.

LaValle scored 28 goals and 36 assists last year as a junior. This year in an encore performance, he finished with 26 goals and once again eclipsed the 60-point plateau with 36 assists.

His point production coincided with two straight trips to the state championship game. Both of them resulted in defeats, but the journey he shared with Lechner and his teammates will last a lifetime.

"I could not be more happy where I ended up and what I have accomplished and who I accomplished with," LaValle said. I love my coaches, I love my teammates. My teammates, dating back five years, I've learned so much from everybody. It's awesome.”