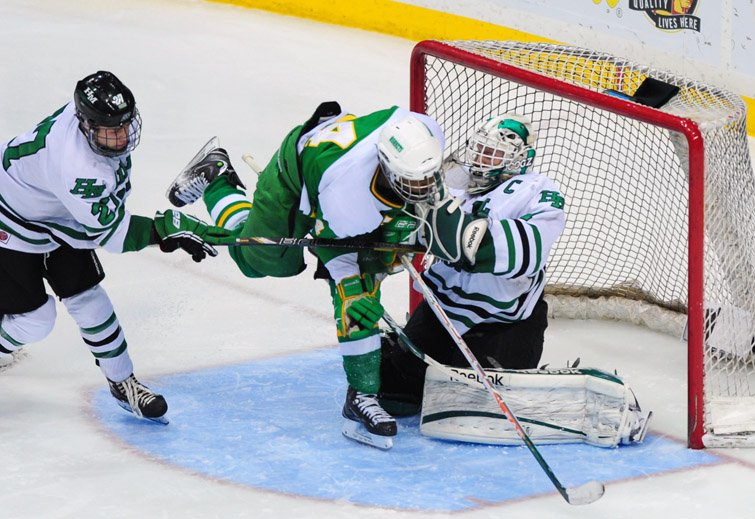 Anthony Walsh is an energy guy.

Wind him up and watch him go.

The Edina senior forward has blazing speed, a big body and a whatever-it-takes mindset. Which is to say Walsh would skate through the end boards and chew Plexiglass if so required to assure his Hornets of a victory.

Nothing so drastic was needed on Saturday, March 9, in the state Class 2A championship game against Hill-Murray at the Xcel Energy Center in St. Paul.

All Walsh had to do was execute a play he has practiced a thousand times. All he had to do was score on a breakaway. In front of 19,000 fans. On statewide television. In the biggest game of his life.

“This is the biggest goal, something I can’t even dream of,” said Walsh, whose second-period goal capped No. 3-seeded Edina’s scoring in their 4-2 triumph over the top-seeded and top-ranked Pioneers. “To have a breakaway in the state tournament, in front of 19,000, and to not mess it up, I don’t even know.

“It was just crazy.” 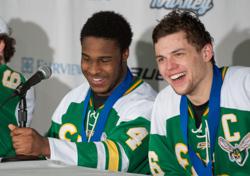 Edina's Anthony Walsh, left, and Matt Nelson speak to the media after the Hornets beat Hill-Murray 4-2 in the state Class 2A title game on Saturday. Photo by Adam Crane

Heroes can emerge from most anywhere during the state tournament. Walsh, a checking-line grinder who is as much a bulldozer as he is hockey player, scored all of four goals during the regular season. He doesn’t hail from the deepest recesses of the bench or scoring charts, but he’s not the guy you expect to burst in and score on a breakaway, either.

With time winding down in the second period, Walsh blocked a shot from just inside the blue line. The puck ricocheted of his shin pad toward center ice, and he took off as though he had been launched from a bazooka.

“As soon as he blocked that shot I thought no one is going to catch him because he is the fastest kid in the state, in my opinion,” Edina defenseman Matt Nelson said. “I play with him every day in practice, and I knew there was no way they were going to catch him.

“Seeing him make that move, I was like, 'I’ve been seeing him do that all the time in practice now.' For him to bury that was a great feeling.”

About that breakaway move. Walsh went into great detail when asked about it. He talked about looking glove side on Pioneers goaltender John Dugas, then considered a high shot blocker side before finally decided the best course of action would be to tuck the puck in through Dugas’ leg pads.

Walsh’s description drew eye rolls and smiles from his teammates at the postgame media session. Edina coach Curt Giles, for one, wasn’t swallowing any of the tale.

“That’s the biggest lie you’ve ever heard,” Giles said with grin. “He didn’t look anywhere. He was going 200 miles per hour. He knew he was going to go five hole.”

Walsh’s goal put the Hornets ahead 4-1 with 2 minutes, 31 seconds left in the second period.

Giles has a habit of tagging his players with terms of "affection." When the Hornets won the state championship in 2010 he called them mutts. This year they are goofballs.

There’s no bigger goofball than Walsh. He’s the team’s resident jokester. Talk about energy. You should see him off the ice.

“I’ve never seen a kid with more energy,” Nelson said. “The kid, he is running around, we’ll have just played a double overtime game or something, and he is bouncing off the walls.”

“Anthony would literally do anything for one of his teammates,” Giles said. “They know that he’s willing to commit that to anybody. He’s just one of those kids you’ll never forget you had on your hockey team.”

The construction of a championship team requires pieces such as Walsh. Flash and flair will only take you so far. There has to be some substance with all that style.

Walsh said he “almost broke down” when Giles talked about his importance to the team.

“Words can’t describe it,” Walsh said. “For Curt to say that is amazing.

“It was just too much, and it meant the world to me.”