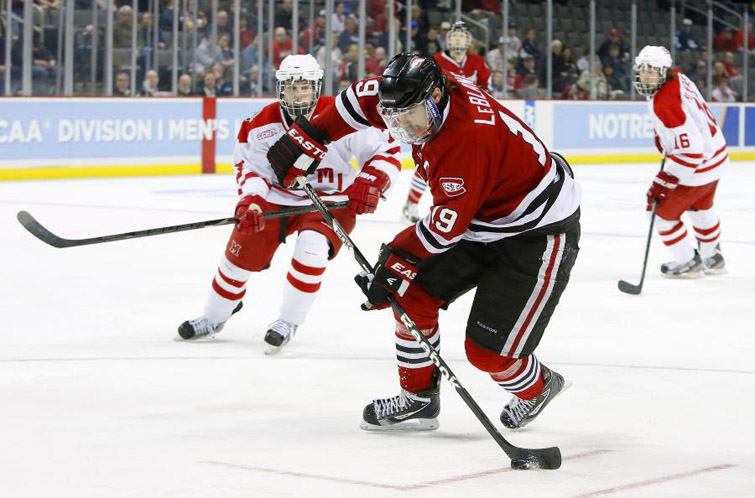 PITTSBURGH –The mood on St. Cloud State’s charter flight back to central Minnesota late Friday was likely a little lighter than it might have been had the team left 24 hours earlier. Though the Huskies won’t get a team trophy after Thursday night’s 4-1 loss to Quinnipiac in the Frozen Four semifinals, they took home college hockey’s top individual honor.

Senior forward Drew LeBlanc, from Hermantown, was named the 2013 winner of the Hobey Baker Award. LeBlanc was the WCHA Player of the Year and led the Huskies with 50 points in 42 games. It was a notable comeback for LeBlanc, who had what would have been his final season of college hockey cut short in November 2011 when he suffered a compound leg fracture in a game against Wisconsin.

“When he was sitting on the sidelines, he had unfinished business,” said Huskies coach Bob Motzko. “He wanted to come back and help this program, help his teammates.”

Motzko’s first concern was ensuring LeBlanc would fully recover, and then he concentrated on getting him to come back for a fifth season instead of turning professional. LeBlanc came back, and he played a key role in leading the Huskies to their first WCHA regular season title.

“As it turned out it was a blessing in disguise, to come back this year and play with these guys all year,” said LeBlanc of his teammates. “We had a tremendous ride.”

LeBlanc becomes the ninth Minnesotan to win the trophy, which was first awarded to Neal Broten of the Gophers in 1981. Jack Connolly of Minnesota Duluth, whom LeBlanc has known since they played youth hockey against one another, won it last year.

“There must be something in the water up there,” LeBlanc joked.