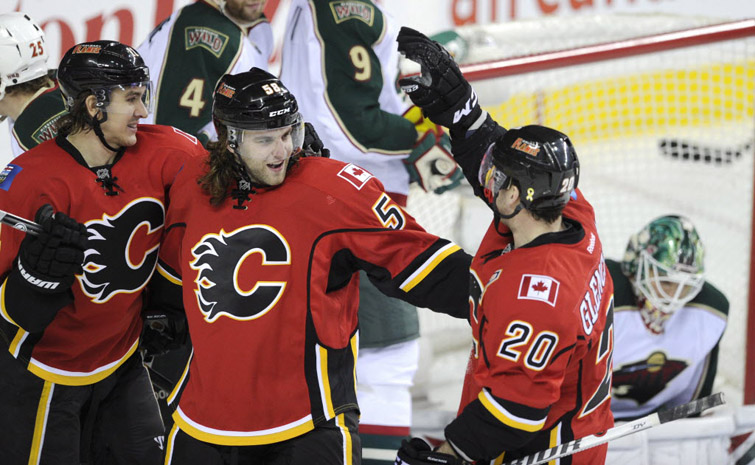 Ben Hanowski of LIttle Falls, center, celebrates after scoring against the Minnesota Wild in his NHL debut. Associated Press

Unlike his St. Cloud State teammates, Ben Hanowski had yet to cut his long, unkempt-looking hair Monday morning from a charitable endeavor the Huskies conducted through their run to the Frozen Four for Locks of Love.

The freshly anointed Flames forward already was being ribbed for it by his new teammates.

“I was doing my sticks and Jiri Hudler gave me a pair of scissors and said it was not for my tape,” Hanowski said, laughing.

The Little Falls, Minn., native, acquired last month from the Pittsburgh Penguins in the Jarome Iginla trade, made his NHL debut on Monday night against his homestate Wild and scored his first career goal in the third period.

“It adds a little cherry on top getting in your first game against the team you grew up cheering for,” said Hanowski, 22. “Playing Minnesota makes it that much sweeter than it was anyways.”

Hanowski, who was supposed to be in St. Cloud taking financial institutions and insurance exams Monday and Tuesday, instead began his pro career.

“I enjoyed my four years at St. Cloud,” he said. “It was a great four years, but I’m excited to start my new journey.”

Hanowski knows for the rest of his career, he will be linked to Iginla, the former Flames captain and icon.

“But I’m just going to be myself and be the player I can be,” Hanowski said.