The Class A State Tournament final that featured the Breck Mustangs and the Warroad Warriors and there was not a person that could put a finger on the game and how it would play out. The depth, skating ability, goaltending and play of the Mustangs defensive corps entered the game with a complete package. On the other side of the ledger, the Warroad Warriors brought a steady positional game with deadly special teams to the table.

It was the depth of the Breck Mustangs that resulted in a 7-3 Class 1A State Championship as the Warriors were forced to the limit. Joe Rehkamp and his speed stretched the rink and allowed a large number of chances. The Mustangs came in waves in the first period and scored twice.

Riley Borer fired a shot past the glove hand of Warrior goalie Jason Goldsmith from the right boards. Rehkamp, who finished with 3 assists on the tournament, Danced through the neutral zone gaining valuable space. In doing so, he attracted attention and fed Borer for the game's first goal at 5:22.

With the Warriors back on their heals, the Tyson Fulton buried another goal for the 2-0 lead as he buries a rebound off the blocker pad from Goldsmith. It was Rehkamp who worked his way into the slot area to create the chance. The lead would be short lived as it was the Warriors who went to work and found the much needed jump.

They scored at 10:53 as Michael Pieper made a great individual move at the blue line to create space for himself and danced to the top of the blue line. His quick release beat John Russell low to the stick side as Pieper picked up his first goal and 6th point of the tournament. The Warriors fed off that goal and it was Chris Sylvester who gobbled up a rebound and tucked it n the back of the net of the back door.

Nick Stoskopf took a shot from the slot that was blocked by the defense and found its way to the stick of Sylvester who notched his 2nd of the season. The game surged back in the hands of the Mustangs who closed out the first period in solid fashion. As the game advanced to the second period, it was the Mustangs, who got better and better as the tournament went on, that grabbed the momentum an didn't let go.

Reid Herd converted a short handed goal as he joined the rush created by none other than, Rehkamp who fired a pass to the hard charging Herd. As the puck came to the slot it was Herd who reached out and deflected it over the poke-checking Russell for the 3-2 lead. The Mustangs never looked back.

Michael Mooney scored on a blast from the point to go up by two goals at 14:39 of the second period. That proved to be the dagger, and with a couple of ill-advised penalties, the Warriors were stuck in pk mode as they had to wait to generate chances. Wes Iverson scored on a breakaway for the 5-2 lead, A Dane Shaugabay goal at 14:58 and two empty net goals later, the Mustangs were named State Champions.

Breck reeled off 17 straight wins en-route to their third State Championship in their sixth trip. It also marks 3 titles in this decade as they retooled with a vengeance. The Mustangs finished the season with a 27-3-1 record while the 2nd place Warriors who were in search of their 5th State title fell short yet finished with a sturdy 28-3-0 record. 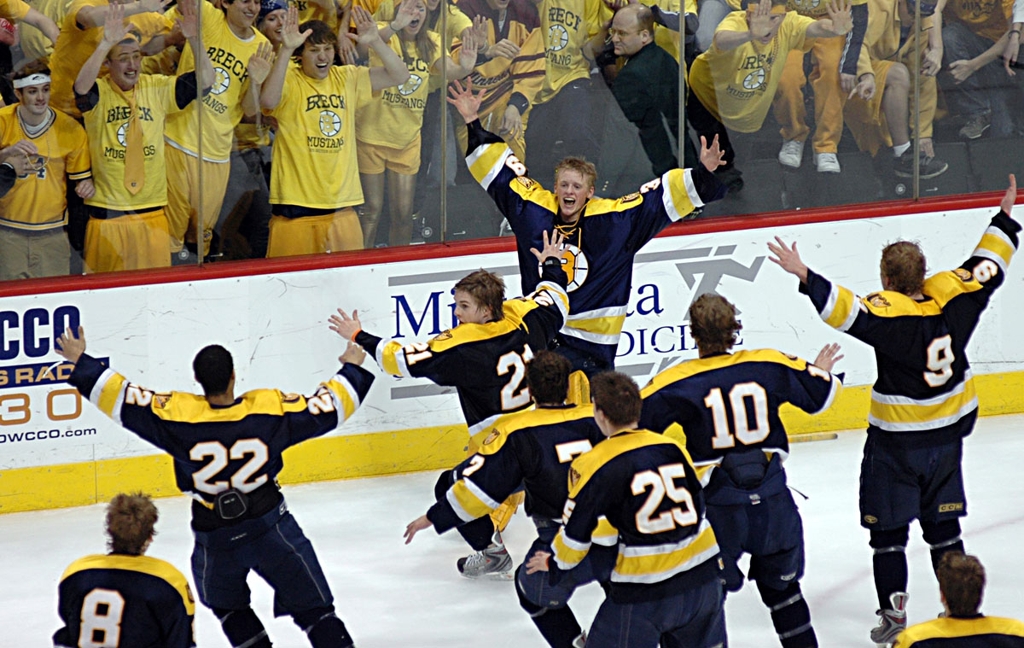