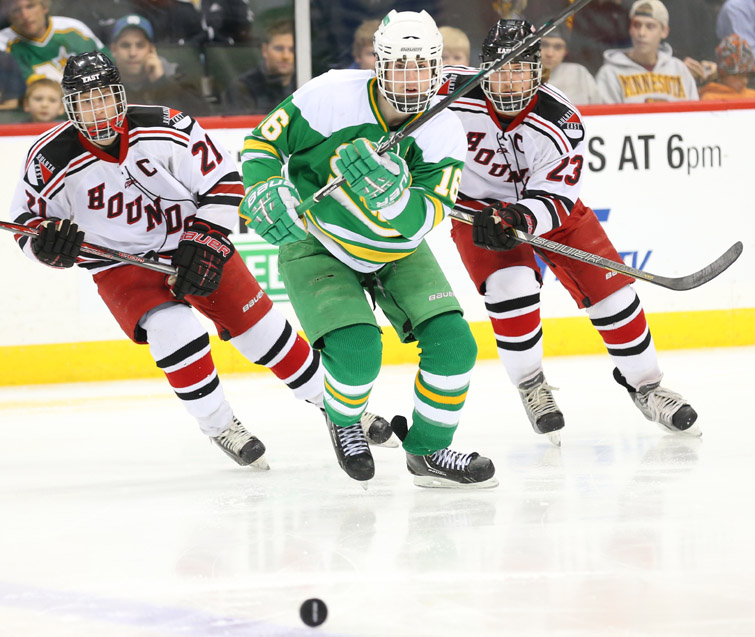 Six players who spent the 2012-13 season with their Minnesota high school team and seven other players who played high school hockey in Minnesota were selected in the seven-rounds of the National Hockey League draft, held June 30 at the Prudential Center in Newark, N.J.

Topping the list was Connor Hurley, who led Edina to the 2013 state Class 2A title. He was taken with the eighth pick in the second round, 38th overall, by the Buffalo Sabres.

Minnetonka defenseman Tommy Vannelli was the next to be selected as he was chosen by the St. Louis Blues with the 17th pick of the second round, 47th overall. The Blues have a history with Minnesota high school products, including current captain David Backes of Spring Lake Park and Warroad graduate T.J. Oshie.

The fifth round featured seven players with Minnesota ties, beginning with 2011 East Grand Forks graduate Tucker Poolman, taken by the Winnipeg Jets with the sixth pick of the round, 127th overall.

He was followed by 2011 Blaine graduate Jonny Brodzinski, the 148th overall selection, who was selected by the Los Angeles Kings with the 27th pick of the fifth round.

The final player selected from the 2012-13 class of Minnesota seniors was Tartan center Jake Jackson, selected 20th in the seventh round, 201st overall, by the San Jose Sharks.

Grand Rapids center Avery Peterson, a senior in 2013-14, was selected with the 16th pick of the sixth round, 167th overall, by the Minnesota Wild.

Five of the 10 Minnesota 2013 high school alums were also finalists for the Mr. Hockey Award, including Besse.

In addition to the six 2013 graduates taken in this year’s draft, Grand Rapids defenseman Jake Bischoff was selected in the 2012 draft, fourth in the seventh round, 185th overall, by the New York Islanders.