Hanging out with Lord Stanley 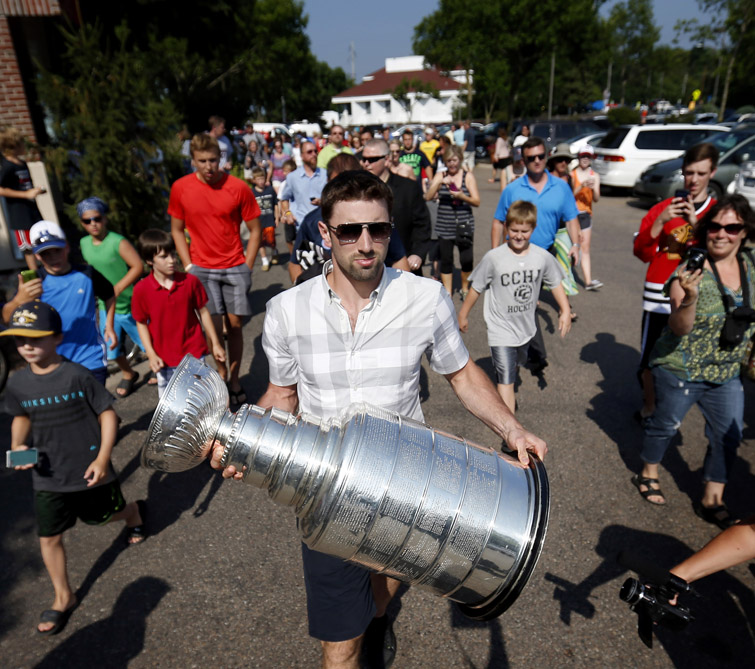 In the great tradition of the NHL, Eden Prairie native Nick Leddy got his chance to show the Stanley Cup around town on Thursday. The young Blackhawks defenseman called it a “special” day. Photo by Carlos Gonzalez, Star Tribune

Any time the sun is out and the mercury is above 80, Maynard’s restaurant in Excelsior is going to be crazy.

Long before Lord Stanley’s Cup made its way to the Lake Minnetonka shore the people started coming. Parents with kids wearing Blackhawks jerseys. Teenagers. In groups they streamed onto the deck, which had one end roped off. A table was covered with linen, and everybody waited.

The Stanley Cup, awarded to the NHL champion every year, is the trophy that rubs shoulders with the people. During the summer, every member of the winning team gets to take possession of the Cup — under the watchful eye of a league official — for about a day or two.

This year’s champion is the Chicago Blackhawks. And Leddy, who grew up in Eden Prairie, played for the Gophers and was drafted by the Wild, was a defenseman on the team that beat the Boston Bruins in six games.

And Thursday was Leddy’s day. The Stanley Cup has been just about everywhere. Mountaintops, Red Square, Afghanistan.

And, now, Maynard’s. Leddy knows the family that owns the restaurant and thought it would be a good place to show off the Cup. So the sea of people by the lake parted as Leddy — a goatee the only thing left of his playoff beard — carried the big silver cup over to the table.

“Just being able to carry this in, call myself a champion, it’s so special,” Leddy said. “It’s something I’ll never forget — and would love to do again.”

It has been a charmed path for Leddy, 22.

A highly regarded player in high school, Leddy decided to stay at Eden Prairie High School instead of joining the national developmental program because he wanted to play with his friends. The result: a state championship in 2009 and the Minnesota Mr. Hockey award.

After a season with the Gophers and a Wild trade with Chicago, Leddy made his NHL debut with the Hawks during the 2010-11 season, playing 46 games. In three seasons he has played in 176 games, and helped win one Cup.

It got to town just after noon Thursday. It was delivered to the Leddy household, where there was a reception for family, friends and neighbors. “I wanted to do that for them, because they did so much for me growing up,” Leddy said.

After that, the Leddy entourage went, with the trophy, to the offices of Shock Doctor, a corporate sponsor. From there it went to Maynard’s. Thursday night the Cup was headed for downtown Minneapolis, first Brit’s Pub and then Seven Sushi Ultralounge and Skybar.

Friday there will be more. Another private reception, then an appearance for the public at noon at Eden Prairie Ice Arena.

Later in the afternoon it will travel to the University of Minnesota Amplatz Children’s Hospital and then to Mariucci Arena on campus.

And then, on to the next Blackhawks player.

“He’s such a wonderful kid,” said Neil Sheehy, Leddy’s agent. “He’s a homegrown talent. He won the state championship, he won Mr. Hockey. And now, the Stanley Cup — which is so special — four years after playing in high school. Nick wanted to bring it here. He’s a Minnesota kid and he wants to bring it to Minnesota people.”